Sydney, NS, Urban Community. Sydney is located near the eastern extremity of CAPE BRETON ISLAND. It is the centre of the second-largest urban complex in Nova Scotia, CAPE BRETON REGIONAL MUNICIPALITY (1995). Its fine harbour, known as Spanish Bay in colonial times, is ringed by the richest coalfield in eastern Canada.

Since 1900 it has been noted for its huge steel mill, the largest and most modern in Canada at its construction. The industrial core around the mill has been in decline since the end of WWII as the coal mines of the surrounding communities became less productive and the obsolete steel mill less competitive with central Canadian producers. 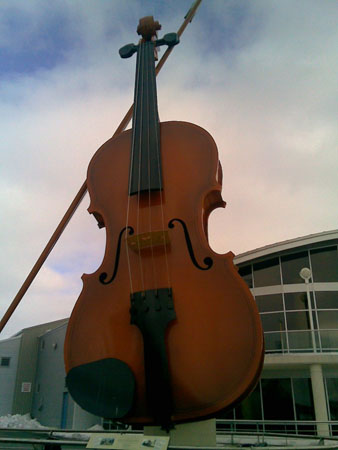 When Cape Breton was separated from Nova Scotia in 1784 as a refuge for LOYALISTS, Sydney was chosen as its capital. A townsite was developed under the direction of Governor J.F.W. DESBARRES and named for Lord Sydney, then colonial secretary. Less successful as a separate colony than New Brunswick, Cape Breton was rejoined to Nova Scotia in 1820 after nearly 4 decades of maladministration, political intrigue and general underdevelopment. Sydney, still a tiny outpost of a few hundred residents, but with the pretensions of a colonial capital, was reduced to being shire town to Cape Breton County, which then included the entire island. It was generally underdeveloped throughout the 19th century, but remained the administrative centre of the island.

Sydney's fate has been inextricably linked to the mining of coal. Sea coal had been taken by the French during the occupation of LOUISBOURG in the 18th century, but it only came under intensive development towards the middle of the 19th century, responding to increased demand first in the US and later in central Canada. Sydney provided services and shipping facilities for surrounding coal towns. The location of steelmaking there in 1899 transformed Sydney. The Dominion Iron and Steel Company (later Dominion Steel Corporation) occupied prime waterfront property and invested several hundred million dollars in plant and land.

The town's population doubled and redoubled several times over the next decade, drawing migrants from the exhausted farms of the island and large numbers of Europeans as well, giving the city the most polyglot population in the region. Thereafter the steel mill, based on local coal resources, limestone from nearby quarries and iron ore from BELL ISLAND, Nfld, formed the city's core. Hospitals, government services, cultural and educational institutions all centered here. The island's commercial life radiated from the core of merchants along Sydney's waterfront. Connection to central Canada by rail in the 1880s solidified its commercial dominance. In 1900, it was incorporated as a city. Yet, like most similar communities in Canada, it has risen and fallen with the development of its hinterland region. Sydney's has been in decline for some time.

Sydney's oldest portions were established along the waterfront, much like all seaport towns in the Atlantic provinces. Bisected by the steel mill, which occupies most of the south side of the outer harbour, it spread out to encroach on a series of hills behind. The mill is surrounded by rings of drab company-built frame houses in which reside one of the most militant work forces in Canada. The steelworkers of Sydney struggled from the beginning to establish their right to collective bargaining. They did not succeed until WWII when the United Steelworkers of America finally gained recognition as bargainers for the steelworkers. Sydney has a fine central park and several large institutional buildings, including UNIVERSITY COLLEGE OF CAPE BRETON, located on the outskirts of the city.