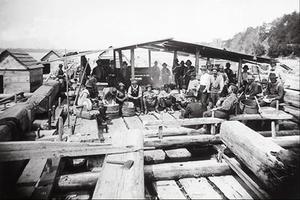 Ottawa, around 1880. Timber was moved down the Ottawa and on to Quebec City via these rafts (photo by W.J. Topely, courtesy Library and Archives Canada/PA-840). 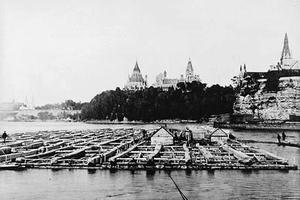 Once the spring timber drive reached the main rivers, the timber was assembled into rafts for transportation to the shipping port. On the OTTAWA, SAINT JOHN and MIRAMICHI rivers, rafts comprised several "cribs" or "joints," each about 20 sticks secured in an ingenious 2-layer wooden frame. On the ST LAWRENCE, "drams," larger frames secured with withes (sapling "ropes") were used. Both types varied greatly in size. On the Saint John, rafts of 12-140 joints came downriver in the 1830s, but the largest were on the St Lawrence and probably contained 2000-2500 tons of timber.