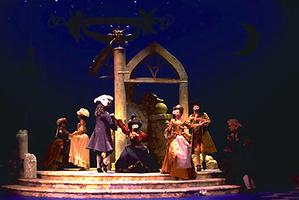 In October 1963 the newly formed Vancouver Playhouse Company opened the 647-seat Vancouver Playhouse, on Hamilton Street, with Brendan Behan's The Hostage. The early years were a struggle for the company. It lacked support from its host city and, because the building it occupied had not been designed for the purpose, administration and workshop spaces were located apart from the main performance space.

The Vancouver Playhouse adopted the standard program pattern for regional theatres in Canada - a September to May season of about 6 plays that were mainly recent London and Broadway successes with a few classics included. From as early as 1966, every season featured at least one Canadian play. Emphasis was placed on enrolling season-ticket subscribers. This basic pattern has informed program planning for more than 40 years.

The Playhouse has several times run a second season in a smaller venue, intended for experimental work. None of these ventures lasted long. From 1964 the Vancouver Playhouse faced competition from the ARTS CLUB THEATRE, particularly since the 1980s, when the Arts Club acquired a second theatre and was operating year-round.

In the 1960s the Playhouse demonstrated a commitment to Canadian work, starting with comedies by Eric NICOL. The premiere of George RYGA's The Ecstasy of Rita Joe in the fall of 1967 was a great moment for the company. Sharon POLLOCK's The Komagata Maru Incident (1975), on the second stage, was a later successful premiere of a Canadian work. Later, dramas by such local authors as Aaron Bushkowsky, Tom Cone, Joan MACLEOD and Guillermo VERDECCHIA premiered at the Vancouver Playhouse.

Christopher Newton's 6 years, which were supported by Cameron PORTEOUS as designer, saw some of the greatest achievements of the Vancouver Playhouse. Newton brought in foreign directors and created a theatrical, slightly decadent style in works such as Camille, The Count of Monte Cristo and Leonce and Lena, directed by Liviu Ciulei. Walter Learning began his tenure as artistic director in 1982 with a 12-play season, but this initiative did not receive a supportive response. The Vancouver Playhouse, the largest professional theatre company in British Columbia, supplemented its 6-play season with a new play development program and a community outreach and education program. Glynis Leyshon, the first Vancouver-born director, offered a varied program and had a well-deserved success with The Overcoat, a non-verbal, movement-to-music piece for 23 actors devised by Morris PANYCH.

Despite a bail-out from the city in 2011, the Playhouse debt was $1 million and annual losses of $500 000 were predicted. Nevertheless the abrupt closing at one day's notice in March 2012 came as a shock. Hope of any re-opening remains vague.