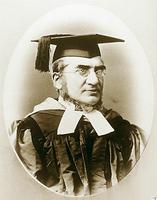 A prolific author, editor and translator, and concerned chiefly with the contemporary debate on religion and science, De Sola's own writings included studies on Jewish history, cosmography and medicine. In 1858 McGill made him an honorary doctor of laws, the first Jewish minister to receive this honour in England or North America; in 1872 De Sola became the first British subject to open the US House of Representatives with prayer, a privilege that brought him wide acclaim.