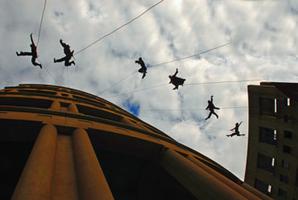 Aeriosa's performances take place on the outside of tall buildings, utilizing the walls, ledges, rooftops and open sky of the architectural setting (photo by Dominic Schaefer, courtesy Aeriosa Dance Society)\r\n

Formed in 2001, Aeriosa Dance Society is a Vancouver-based dance company specializing in vertical dance. The company founder and artistic director, Julia Taffe, is a choreographer, performer and rock climber. She completed dance training with the Winnipeg School of Contemporary Dancers, Royal Winnipeg Ballet and Toronto Dance Theatre prior to becoming a rock climber and climbing guide certified by the Association of Canadian Mountain Guides.

Aeriosa Dance Society merges contemporary dance with mountain-climbing skills to create performances that take place on the outside of tall buildings, utilizing the walls, ledges, rooftops and open sky of the architectural setting. Inspired by the subculture of mountain- and rock-climbing enthusiasts in Alberta and British Columbia, Aeriosa's work references the remote vertical landscapes of Western Canada and connects them to international urban architectural sites and public gathering places. The dancers use space in a way not possible in the confines of traditional theatre environments, challenging the viewer's perspective of gravity, the capacity of the human body and our relationship to the earth. Aeriosa's choreography includes movement not possible on the ground, such as flying or sailing through the air, and flocking, the execution of simultaneous movements with accurate changes of direction by the dancers.

The company of 12 dancers uses the same ropes and harnesses that climbers rely on in wilderness settings to ascend and descend mountains. The company also includes 4 riggers, who are responsible for designing and assembling the rigging equipment, ensuring the safety of the dancers. The riggers use the same structural components at the top of buildings that outdoor workers use to anchor equipment in accordance with safety codes when working at heights.

Aeriosa Dance Society originated with Taffe's solo work climbing in wilderness settings and her impulse to dance on the sides of mountains, such as the Grand Wall on Stawamus Chief in the Coast Range and Crescent Towers in the Bugaboo mountains of southeastern BC. Taffe made films of these mountain dances with filmmaker Janet Roddan - shorts titled Stone Soup and Granite Ocean - and also used them as media to accompany the urban dances and link the 2 environments.

To bring her work to an audience, Taffe decided to bring mountain dancing to urban centres. In 2001, Aeriosa performed its first building-site work, dancing on the outside of the Scotiabank Dance Centre in downtown Vancouver. In 2002-03 Taffe created the On Earth project, a vertical dance stage performance commissioned by the Banff Centre for Mountain Culture in honour of the UN International Year of Mountains (2002). Aeriosa Dance Society performed and adapted the work for several specific sites: in Montréal on the outdoor wall of the main studio at the international headquarters of Cirque du Soleil; in Nanaimo on the outside of the fly tower of the Port Theatre; in Banff onstage at the Eric Harvie Theatre; in Taiwan on the outside of Taipei's city hall; and in Aspen, Colorado, inside the historic Wheeler Opera House. In 2006 Taffe performed her first full-length work for stage, Stone:Drift, at the Scotiabank Dance Centre.

In 2003 Julia Taffe received the Mountain Culture Hero Award from the Mountain Institute in Washington, DC, in recognition of her contribution to mountain culture. In 2009, Aeriosa Dance Society won a Creation Award from BC's Arts Partners in Creative Development to create In Situ, an interdisciplinary performance to be performed at the Vancouver Public Library with the Vertical Orchestra, 12 musicians selected by commissioned composers Jocelyn Morlock and Jordan Nobles. The full-length work premiered in March in conjunction with the Cultural Olympiad during the 2010 Paralympic Winter Games, and was performed again in April.