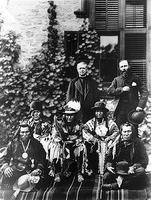 Lacombe used his trace of native blood to gain entry to the hearts of the Métis and native peoples in 1852 when he came west to serve them (courtesy PAA).
PreviousNext

Albert Lacombe, Oblate priest, missionary (b at St-Sulpice, LC 28 Feb 1827; d at Midnapore, near Calgary 16 Dec 1916). A successful missionary to the Cree and Blackfoot, Lacombe used his Indigenous ancestry to gain an entry to the hearts and minds of the Fort Edmonton Métis and Indigenous people in 1852 when he came to serve them. In due course, he either founded or ministered at the Alberta missions of Lac Ste Anne, St Albert (1861) and St Paul des Cris (Brosseau) 1865. After 7 years as a travelling missionary among the Indigenous peoples, he moved to Manitoba in 1872 and took over St Mary's parish, Winnipeg. On his return to Alberta in 1882, he became priest of Calgary's St Mary's parish and also served in southern Alberta at Fort Macleod and from his "Hermitage" at Pincher Creek.

In 1883, when the Canadian Pacific Railway came into conflict with the Blackfoot, who threatened to block the route across the reserve, Father Lacombe successfully negotiated on behalf of the railway with Chief Crowfoot. In 1894 Lacombe was principal of an industrial school at Midnapore; he initiated the colony of St Paul des Métis in 1895, and in 1909 he started the Midnapore Old Folks' Home. As the church's spokesman for the prairies, he played a significant part in influencing government policy, as well as helping settle the prairies. His love for the Indigenous people never faded. Called by the them "The Man of the Good Heart," he wrote both a Cree grammar and a dictionary.