Alberton, PEI, incorporated as a town in 1913, population 1135 (2011c), 1081 (2006c). The town of Alberton is situated in Prince County, 136 km northwest of Charlottetown. In 1820, 40 families came to the Cascumpec Bay area. With the development of a shipbuilding industry at Northport and with the production of surplus crops by the settlers, traffic increased on the crossroads near the bay, and traders began locating there in the late 1820s.

By 1833 Alberton was known as "Stump Town" because hundreds of stumps were left after the clearing of a forest. Owing to its crossroads location, Alberton was later known as the "Cross." On 27 June 1862, the community was renamed in honour of Albert Edward, the Prince of Wales. Alberton is still a small commercial centre servicing 5000 rural residents. 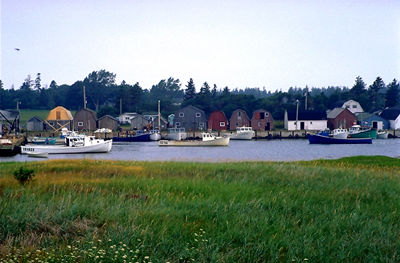