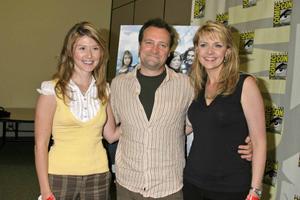 Amanda Tapping, actor, director, producer (born at Rochford, Essex, UK 28 Aug 1965). Amanda Tapping moved to Ontario with her family as a young child. She excelled in the sciences and performing arts while in grade school and graduated from the North Toronto Collegiate Institute in 1984. Tapping attended the University of Windsor School of Dramatic Arts, from which she graduated with a bachelor of fine arts in 1988.

Her early career was spent learning her trade in Toronto's theatre scene, where she appeared in several stage productions including Children of a Lesser God and Lion in Winter. In 1991 she formed an improvisational comedy troupe called Random Acts, which toured throughout Ontario; she then redirected her career toward film and television. Her breakthrough role came in 1997 when cast as Samantha Carter on the syndicated sci-fi television series Stargate SG-1. Her portrayal of the clear-eyed, collected and independent air force officer became something of a favourite among North American fantasy fans, and Amanda Tapping herself became a true creative collaborator behind the camera as well, directing many episodes before the show went off the air in 2007.

Tapping's success within the fantasy genre continued with the lead role as Dr Helen Magnus on the paranoiac sci-fi thriller Sanctuary (2007- ), originally broadcast only on the Internet. She was involved in the series from its development as an executive producer and directed many key episodes. The series went on to enjoy a full run on television.

She had a lead role in Katrin Bowman's BC-produced Random Acts of Romance (2012), a lightly subversive romantic comedy set around the disintegrating marriages of 2 pairs of bored urbanites.