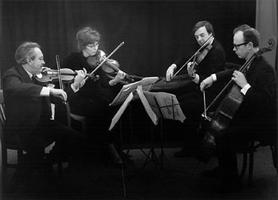 This first Amati String Quartet was founded in 1968 by Murray Adaskin and three other faculty members of the University of Saskatchewan: Norma Lee Bisha (second violin), Michael Bowie (viola), and Edward Bisha (cello). It gave its first concert on 2 February 1969. Later that same year, Robert Klose was named second violin and Norma Lee Bisha replaced Michael Bowie. The personnel remained stable until the group was supplanted in 1971 by the Canadian Arts Trio after fewer than 10 formal concerts. The quartet was too short-lived to develop a wide repertoire or a distinctive style.

The University of Saskatchewan Amati Quartet in Residence was established in August 2003 and also played on the university’s Amati instruments. This quartet had previously been known as the Cole Quartet. The initial members were Marla Cole (first violin), Michael Swan (second violin), Geoff Cole (viola) and Linda Bardutz (cello). In 2004, Luke Hnenny became second violinist and Peter Hedlin replaced Bardutz as cellist. The Amati Quartet performs a yearly recital series, including a Thanksgiving Monday concert, and plays at various University of Saskatchewan events. It performed for Queen Elizabeth II in honour of Saskatchewan’s 100th anniversary in May 2005, and since its opening season has undertaken a project to perform all of Haydn’s string quartets.

The Amati instruments at the University of Saskatchewan — one violin built in 1627, another violin built in 1637, the viola in 1607 and the cello in 1690 — are the only set in Canada built by the Amati family of Cremona. The viola’s back bears the painted crest of the Borghese family that commissioned it. All were purchased by the Saskatchewan collector Stephen Kolbinson and sold to the university in 1959. The Canadian Arts Trio (active 1971–75) — which comprised Robert Klose (violin), Edward Bisha (cello) and Robin Harrison (piano) — used two of the four Amati instruments owned by the university. The Amati instruments were lent to Victoria's Lafayette Quartet 1992—98. They have also occasionally been played by members of the Saskatoon Symphony Orchestra. (See also Instrument collections.)

This separate, unrelated Amati Quartet was formed in 1985 by Joseph Peleg (first violin), Leslie Knowles (second violin), Daniel Domb (cello), and Rivka Golani (viola), who was replaced after one performance by Mark Childs. Initially the quartet performed at the Peterborough Chamber Music Festival, and later was based in Toronto, performing at various Ontario festivals and concert series (e.g., the Elora Festival). They were heard often on CBC Radio, where they premiered Andrew P. MacDonald’s String Quartet No. 3 (The Delphinian), commissioned by Amati.

In 1997, the Amati String Quartet became quartet-in-residence at the Shaw Festival, for which they recorded Christopher Donison’s Rashomon Quartet. Subsequent members of this Amati Quartet included David Miller (cello) and Peggy McGuire (second violin). Other Canadian composers whose works the Amati Quartet of Toronto has featured include Srul Irving Glick and Milton Barnes.