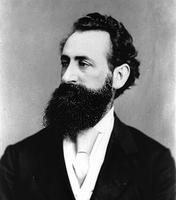 William Alexander Smith was born to a family of Loyalists who settled in Windsor, Nova Scotia, after the American Revolutionary War. As a child, he attended private school and King's College School. In 1840, his family relocated to Halifax, where he worked as a clerk for a wholesale and retail grocery firm. He also attended grammar school at night, which was run by the father of future Prime Minister Sir John Thompson.

Smith left his job in Halifax in 1852 to make his way to the California goldfields. A keen amateur photographer, he set up a daguerreotype photography studio instead of digging for gold when he reached the Pacific. Settling in Mud Springs, soon renamed El Dorado, Smith followed the town's example and renamed himself. In 1854, the California Senate passed a bill naming him Amor de Cosmos; the name, he said, "tells what I love most [...] order, beauty, the world, the universe." De Cosmos trekked northward to join his brother in Victoria on Vancouver Island when news of gold on the Fraser River reached California in 1858 (see Fraser River Gold Rush).

Journalism became his new venture on the island. He founded The British Colonist, which published its first issue on 11 December 1858.

The British Colonist provided a springboard into a political career. Beginning in his first editorial in the newspaper’s first issue, de Cosmos was highly critical of Governor James Douglas and the colonial administration, which was dominated by former Hudson’s Bay Company officers. (Douglas’ family and friends also occupied numerous unelected positions.) Derided by de Cosmos as the “family-company compact,” this elite group opposed representative political institutions and advocated a hierarchical social order (see Family Compact). De Cosmos’ own politics were influenced by British liberalism. He supported individual liberty and representative institutions and opposed political, social and economic privilege. After two unsuccessful attempts, de Cosmos won a seat in the Legislative Assembly of Vancouver Island in 1863. He held the seat until 1866. Following the union of the provinces of Vancouver Island and British Columbia, he served in the Legislative Council of British Columbia from 1867 to 1868 and from 1870 to 1871.

Amor de Cosmos was elected to the British Columbia Legislative Assembly (1871–74) as well as the House of Commons (1871–82) as representative of Victoria. He succeeded John Foster McCreight and served as British Columbia’s second premier (1872–74).

During his tenure as premier, he furthered several popular initiatives begun by McCreight, including the initiation of a public school system, the reduction of the burgeoning number of public officials, the extension of the property rights of married women and the implementation of the secret ballot.

In an effort to stimulate economic growth in Victoria, de Cosmos obtained federal funding to develop a dry dock (a place where ships are built or repaired) at Esquimalt, which could create a thriving port to rival San Francisco. He did so by re-negotiating certain terms of union with the federal government, an agreement that also included the construction of the transcontinental railway’s terminus in Victoria.

In the run up to the 1874 general election, de Cosmos’ political opponents capitalized on the public’s fear and frustration over delays in extending the transcontinental railway to the West Coast. They tried to convince voters that opening the terms of union in order to insert funding for a dry dock would undermine plans to build the railway terminus in Victoria rather than a mainland alternative. A dry dock, they argued, would hamper the area’s economic development. A large mob stormed the British Columbia legislature on 7 February 1874 and forced it to adjourn. Two days later, de Cosmos resigned as premier. De Cosmos would have had to resign his seat regardless of the pressure he felt as premier if he were to continue as a Member of Parliament. Legislation his administration passed in 1873 abolished dual representation ahead of the upcoming election, and de Cosmos was both MP and premier.

After his resignation, de Cosmos’ opponents charged that his efforts to procure funding for the dry dock were tied up with his personal business interests. However, these charges of corruption were later disproved.

Amor de Cosmos continued to serve as Liberal MP for Victoria City and pursued the completion of the railway single-mindedly. In his frustration over the matter, de Cosmos went as far as to introduce an unsuccessful secession motion in 1879 to separate British Columbia from Canada.

Towards the end of his political career, de Cosmos actively contributed to the anti-Chinese and anti-Aboriginal sentiment prevalent in popular and political discourse in British Columbia. In June 1882, he was defeated and replaced by Noah Shakespeare, leader of the anti-Chinese movement.

Amor de Cosmos' last years were marked by growing eccentricity; and, in 1895 he was declared as being “of unsound mind.” According to Robert A.J. McDonald and H. Keith Ralston in the Dictionary of Canadian Biography, de Cosmos “remained in Victoria, wandering along city streets in his familiar garb, occasionally brawling with old opponents, sometimes incoherent in his public utterances.” He died on 4 July 1897.

Although his later political career was largely unremarkable, because of his role as the leading proponent of Confederation, Amor de Cosmos is often cited as British Columbia’s Father of Confederation. His unusual name and reputedly flamboyant personality have also led to de Cosmos being remembered for his eccentricities as much as his political accomplishments.