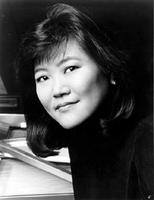 Angela Cheng (courtesy). The music is the Rondo from Mozart's Piano Converto No 9, with the CBC Vancouver Orchestra directed by Mario Bernardi (courtesy CBC).

Cheng has received international acclaim for her technical skill, tone, and musicianship, and has been praised for her interpretation of Mozart. She made her debut at New York's Alice Tully Hall in 1985, and has subsequently given recitals throughout North America, South America, Asia, Europe, and the Middle East. She has been a guest soloist with nearly every major orchestra in Canada, and has performed internationally with the Israel Philharmonic, the Pan-Asia Symphony, and the Saint Louis, Boston, Houston, San Diego, and Maryland symphony orchestras.

Cheng has appeared in concert with various chamber ensembles, including the Colorado, Takács, and Vogler string quartets. In 1994 she became a member of Piano Six (now Piano Plus) with fellow Canadians Angela Hewitt, Jon Kimura Parker, Marc-André Hamelin, André Laplante, and Janina Fialkowska. Cheng toured Israel with the Israel Camerata in 2008, and at the request of Pinchas Zukerman, accompanied the Zukerman Chamber Players on their tours of China (2009), the US (2009), and South America (2010). She has also frequently collaborated with her husband, Alvin Chow (piano), and Chow's brother Alan (piano).

On the occasion of winning first prize at the Montreal International Music Competition in 1988, Cheng's performances of André Prévost's Variations et thème and Brahms' Concerto No. 1 with the Montreal Symphony Orchestra and Franz-Paul Decker were recorded on cassette (RCI 654). Cheng received enthusiastic reviews for her debut recording of two Mozart concerti with Mario Bernardi and the CBC Vancouver Orchestra in 1991 (CBC Records). Other significant recordings have included Clara Schumann's Concerto in A Minor with JoAnn Falletta and the Women's Philharmonic (Koch International); Chopin's Preludes Op 28 and Polonaises (Universal Music Canada); selected works of Clara and Robert Schumann (CBC Records); and four Spanish concerti with Hans Graf and the Calgary Philharmonic (CBC Records). In 2002, with Bernardi, trumpeter Jens Lindemann, and the CBC Radio Orchestra, Cheng recorded Shostakovich's Piano Concerto No. 1 and No. 2 for the film The Overcoat (Morris Panych, director).