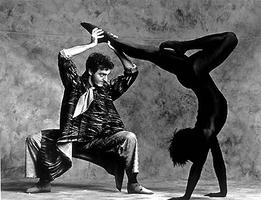 Anna Wyman Dance Theatre was considered one of Canada's principal modern-dance companies from the mid-1970s until its closure in 1990, helping to define the emerging modern-dance form in Canada. It grew from an amateur demonstration and performing troupe created by the Austrian dancer, choreographer and teacher, Anna Wyman, after she settled in Vancouver in 1967. The company was launched professionally as the Anna Wyman Dancers with a series of performances at the Vancouver Art Gallery in 1971 and took the name Anna Wyman Dance Theatre in 1973, when it began to receive operational support from the Canada Council.

In 1973 the company took part in the International Young Choreographers' Competition in Cologne, Germany, where Wyman's Here at the Eye of the Hurricane (music: Karlheinz Stockhausen) was named one of the 3 most outstanding entries.

For many years the repertoire consisted entirely of Wyman choreography. Her early style placed a strong emphasis on improvisation, but, under the influence of her lengthy ballet and modern-dance training in Austria and England, she went on to evolve an abstract and highly theatrical choreographic language, often relying heavily on light, film, video, lasers and computers for technical and theatrical effect. She also favoured dances with social, political and spiritual content, as well as witty celebrations of human athleticism.

In 1975 the company became the first modern dance troupe to tour Canada and went on to become one of the most travelled companies in North America. It was the first modern dance company from the Western world to tour China (1980) and also travelled to India, Southeast Asia, Australia, Europe, Mexico and throughout the US and Canada. A number of films were made of the company, including 2 National Film Board productions, 2 CBC-TV productions in Europe and a 1986 US public television special.

She often worked with artists from other disciplines, such as painter Jack Shadbolt, and in the mid-1980s the company repertoire began to include work from other choreographers. Following reports from its advisors of a decline in artistic standards the Canada Council withdrew operational support from the company in the late 1980s and operations were suspended in 1990. However, Anna Wyman continues to choreograph and present performances by the senior students at her West Vancouver school.