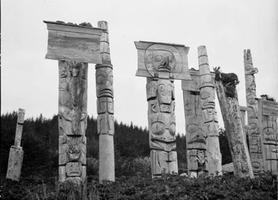 These memorial poles stood in front of a house in SGang Gwaay Llnagaay. The remnants of the village represent an ongoing chapter in Haida artistry (courtesy The Royal British Columbia Museum).

One of the most southerly of the Haida Gwaii, BC, Anthony Island (known as SGang Gwaay by the Haida) holds the remaining fragments of a rich culture. Ninstints (SGang Gwaay llnagaay), a village of the Kunghit Haida, reveals a 2000-year history to archaeologists. The inhabitants of Ninstints were encountered in the late 18th century by European explorers interested in trade. The two groups traded peacefully in the 1780s, but bitter conflicts erupted in 1791 and 1795. Smallpox, rather than war, however, took the lives of most of the inhabitants, and the population was reduced from 300 to 30. The village was finally abandoned in the late 1800s.

The overgrowth of lush vegetation has been cleared away from the remains of Ninstints's longhouses and totem poles, which pay silent homage to their creators. Conservation programs to protect the remaining structures will attempt to prolong the future of this UNESCO World Heritage Site, although the remaining artifacts remain exposed to the elements. The Haida Gwaii Watchmen Program stations watchmen on the island to protect the site. The island was included in Gwaii Haanas National Park Reserve in 1988.