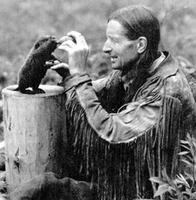 Conservationist Grey Owl presented himself as the son of an Apache and a Scot. He was in reality an Englishman who devoted much of his life to conservation. He is shown here with a beaver kit in Riding Mountain Park (courtesy Archives of Ontario).

Archibald Stansfeld Belaney, alias Grey Owl, writer, conservationist (born 18 September 1888 in Hastings, England; died 13 April 1938 in Prince Albert, SK). Grey Owl was a well-known conservationist and writer in the 1930s. Although born in England, he portrayed himself as the son of a Scottish man and Apache woman. His articles and books stressed wilderness conservation and became bestsellers in Canada and Britain. Shortly after Grey Owl died in 1938, a newspaper article exposed his real identity as Archibald Belaney. He has been the focus of several biographies, articles and films, and his books have been reprinted many times.

Raised by two maiden aunts and his grandmother, Belaney had an unhappy childhood. As a boy he was fascinated with North American Indigenous people and dreamed of becoming one. At 17 he left for Northern Canada where, apart from his war service, he spent the remainder of his life. Through his association with the Ojibwa of Northern Ontario he learned about the wilderness.

Shortly after his arrival he imaginatively presented himself as the son of a Scot and an Apache and began to use the name Grey Owl. As Grey Owl he published his first book, The Men of the Last Frontier (1931). Anahareo, his Iroquois wife, convinced him of the need for conservation, and that became the central theme of his writings.

Grey Owl was appointed to Riding Mountain National Park in Manitoba, and later to Prince Albert National Park in Saskatchewan, to head a beaver conservation program. He wrote three books in Western Canada: Pilgrims of the Wild (1934), The Adventures of Sajo and her Beaver People (1935) and Tales of an Empty Cabin (1936). His work was extremely popular, especially in Britain, where he made two lecture tours.

Shortly after his death, the North Bay Nugget published an article on 13 April 1938 in which it was revealed that Grey Owl had in fact been born in England. Other newspapers picked up the story, and in the ensuing uproar his contributions as a conservationist were largely forgotten. Only a generation later were they again recognized. New editions of his book came out in the early 1970s, and CBC aired a documentary of his life in 1972.

The Continuing Allure of Grey Owl

His work and life have continued to fascinate historians and biographers, readers and viewers. Several biographies were published in the 1990s, including Donald B. Smith’s From the Land of Shadows: The Making of Grey Owl, Armand Garnet Ruffo’s Grey Owl: The Mystery of Archie Belaney (1996), and Jane Billinghurst’s Grey Owl: The Many Faces of Archie Belaney (1999). In 1999 director Richard Attenborough released the film Grey Owl, a fictionalized biography starring Pierce Brosnan.