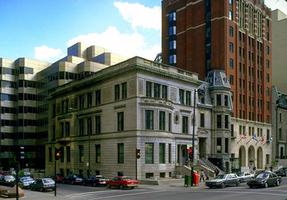 ARCOP is an acronym for Architects in Co-partnership and was adopted as the name for the successor firm to Affleck, Desbarats, Dimakopoulos, Lebensold, Sise. In 1968 Hazen Sise retired and Guy Desbarats left private practice, first for academia and then for the federal civil service. Dimitri Dimakopoulos established his own office. Rechristening the firm ARCOP, Ray Affleck and Fred Lebensold became partners with Arthur Boyd Nichol in 1970. In 1973 they were joined by Paul Hughes and Ramesh Khosla. In 1990 ARCOP Associates merged with Côte Glouberman to form The ARCOP Group.

ARCOP retained the reputation for architectural excellence that had been established in the 1960s and it continued to be a training ground for talented architectural graduates. Projects of note in the 1970s included the Dalhousie University Life Sciences Centre (1973) and the Mughal Sheraton Hotel in Agra, India (1978), which won an Aga Khan Award for Islamic Architectural Design. Drawing its inspiration equally from the planning principles of the Place Bonaventure Hotel in Montréal and the geometric forms of traditional Moghul architecture, the hotel is notable for its contextual design. Maison Alcan in Montréal (1983) was the first large commercial project in Canada to integrate historic buildings in their entirety with new construction. The Montréal World Trade Centre (1991) is similar to it in concept. The Government of Nunavut Building in Iqaluit (with Full Circle Architecture, 1998-99), is an energy-efficient building with a distinctive aerodynamic shape, its three-storey north side sloping to a two-storey south side.