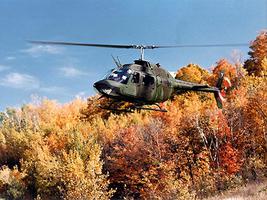 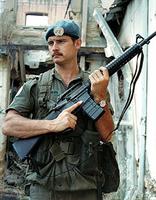 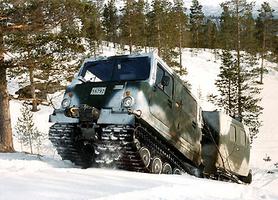 The BV-206 Northern Terrain Vehicle is capable of operations in all climates and terrains (courtesy National Defence Headquarters). 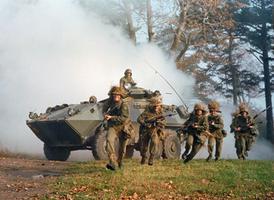 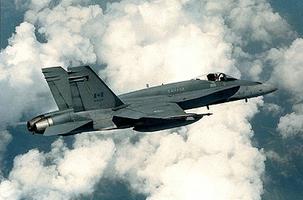 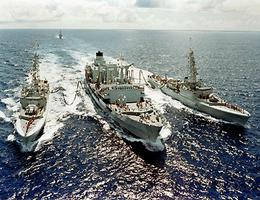 Armaments are fighting tools, including devices for surveillance and reconnaissance. The first armaments were probably jagged pieces of rock (missile weapons) and crude wooden clubs (shock weapons), both instinctive adaptations of food-gathering implements. Eventually a combination created a battle axe or spear, which like most weapons could be used either offensively or defensively. Wood or leather in the form of shield or body armour was purely defensive and of little value by itself. The variety of defensive armaments now ranges from spaced and layered steel and ceramic armour on tanks to airborne warning and command systems (AWACS).

Offensive weapons have become more complex and deadly, with greater range, accuracy and hitting power. Modern missile weapon systems can be conveniently broken down into 3 components: a transportation and launching platform, a delivery mechanism and the missile itself. They range from the foot soldier bearing an automatic rifle to the nuclear-powered submersible carrying submarine-launched ballistic missiles (SLBMs) holding multiple, independently targeted re-entry vehicles (MIRVs) with atomic warheads, remote piloted vehicles (RPVs) and aircraft loaded with napalm, bombs or target-seeking missiles.

The high technology aspect of some current armaments, such as satellite reconnaissance and computerized laser range-finding and communications, makes it extremely difficult to distinguish in some instances between armaments and industrial tools. Space may become a battlefield of the future involving nuclear-powered lasers and other exotic devices. The American "strategic defense initiative" (SDI), implemented by President Ronald Reagan in the 1980s, was the first step toward establishing such defensive measures. The program was abandoned in 1993 due to cost, lack of technological advances and the objections of other countries that the system could be used offensively. America's SDI has been replaced by Ballistic Missile Defence (BMD).

Archaeological evidence suggests that prehistoric armaments in North America developed in the same sequence as in other parts of the world. The earliest written evidence comes from the 14th-century Greenlanders' Saga, which recounts that Norse adventurers armed with axes exploring the N Atlantic coast about 1000 AD fought with "skraelings" (perhaps Beothuks) who used bows and arrows. These were still the dominant weapons when Europeans began to infiltrate the continent again in the 16th century, bringing with them the age of gunpowder.

Jacques Cartier used primitive hand guns ("fire lances") to impress Aboriginals in the Baie des Chaleurs during the summer of 1534, and mounted cannon on the ramparts of his Québec fort in the winter of 1535. In 1609 Samuel de Champlain, allying himself with Huron and Algonquin warriors, killed 2 Iroquois with his (a matchlock musket), thus initiating a long-lived enmity. Pehr Kalm, a Swedish traveller, reported 140 years later that there was scarcely a French Canadian "who was not a clever marksman and who did not own a rifle." He also noted the production of cannon and mortars at the Forges Saint-Maurice near Trois-Rivières. Some Indians were armed with muskets by that time, although the bow and tomahawk remained more popular.

As the indigenous inhabitants were subdued, driven farther west or killed, fighting in North America between people of European descent relied increasingly upon more sophisticated missile weapons and the limited Canadian production of armaments ceased. In the early 19th century the flintlock musket gave way to the breech-loading rifle, while an ever smaller proportion of people possessed weapons. Some magazine rifles from the US were used by the Canadian Militia to repel the Fenians in 1866 and 1870, and an American Gatling machine gun was used in suppressing the North-West Rebellion of 1885. However, the militia continued to rely upon British rifles and artillery.

The Dominion Arsenal began to produce small arms ammunition in 1882, but the first Canadian-built, breech-loading magazine rifle issued to the militia was the Ross (a variation on the Austrian Mannlicher), which first went into production in 1903. An excellent sporting rifle, it proved unsatisfactory under the rigours of active service in 1915, and production ceased in March 1917. In the Canadian Expeditionary Force, it was replaced with the British Lee-Enfield rifle. Militiamen were again issued Ross rifles for home defence during World War II.

For that war Canada manufactured a wide range of armaments, including combat aircraft such as the de Havilland Mosquito and Avro Lancaster bombers, armoured vehicles, artillery and naval guns, landing craft, convoy escorts, radios, radar, sonar, small arms and enormous quantities of ammunition, explosives and pyrotechnics. Few, however, were of Canadian design, nor were Canadian forces necessarily equipped with them. One of the rare Canadian design initiatives, the Ram tank, was not a success and was never used in action; Ram hulls, however, with the turrets removed, were used in NW Europe in 1944 as the first armoured personnel carriers (APCs).

Since WWII Canada has continued to rely largely upon armament designs of its allies, sometimes modified to meet Canadian needs, for major weapon systems (see Bomarc Missile Crisis). For example, the British Centurion tank served as Canada's main battle tank for 25 years, 1952-77. Exceptions have been the Avro CF-100 fighter aircraft and the various classes of small warships in the naval service, most notably the "Tribal" Class destroyers and "St Laurent" Class destroyer escorts. Advanced and complex projects such as the Bobcat APC, the Avro Arrow fighter and the Bras d'Or hydrofoil have had to be abandoned because of restricted marketing possibilities and excessive design costs.

As part of the NORAD agreement, nuclear-tipped air-to-air missiles under American control were held in Canada to be used by Canadian aircraft in case of need. With the adoption of the CF-18 Hornet during the 1980s, these have been phased out of service. Canadian forces are also backed by American nuclear weapon systems, but Canada has renounced nuclear armaments of her own, a decision that in 1970 removed the Honest John missile, acquired in 1961, from the Canadian weapon inventory. Meanwhile, arguments over the offensive or defensive nature of weapons systems such as the Cruise missile and the Stealth bomber rage fruitlessly, since - as in prehistoric times - their use is largely a function of the intentions of those who wield them.