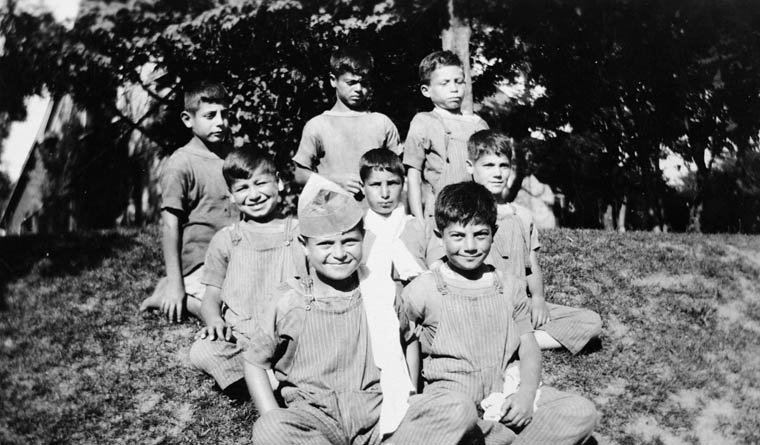 First Wave: To World War I

Armenian migration to Canada began with students, merchants and agriculturalists in the 1880s and 1890s, mostly from territories occupied by Turkey. By 1914 approximately 2000 Armenians, mostly sojourning men from rural areas, entered Canada and settled primarily in southern Ontario.

Many Armenians fled persecution and periodic state-sanctioned massacres by Turkey's Muslim majority. Many immigrants to Canada found industrial work in Ontario communities including Brantford, Hamilton and St. Catharines. For some, this became a stepping-stone to commercial and trade/craft enterprises.

From 1915 to 1922 more than 1.5 million Armenians perished as a result of the Turkish government's policy of genocide. Armenians in Canada searched for surviving family to facilitate their migration to Canada, but Canadian immigration restrictions, including the classification of Armenians as Asians, barred all but 1500 survivors (see Immigration Policy in Canada).

Most of the refugee newcomers were women and children. They composed a much more heterogeneous group than their predecessors. Their arrival revitalized the Armenian communities, leading to the formation of closely-knit Armenian enclaves in Brantford, St Catharines, Hamilton, Galt, Guelph, Windsor, Toronto (Ontario) and Montreal (Quebec). A focus on national survival and family reconstruction led to endogamous marriages – meaning marriages within the same social or ethnic group - being encouraged during the 1920s. Entrepreneurial activities expanded, especially in the oriental rug trade.

Among the newcomers were the "Georgetown boys," a group of about 100 orphan boys brought out in the 1920s by the Armenian Relief Association of Canada to live on a farm purchased for them near Georgetown, Ontario. After the United Church of Canada took over the farm in 1928, the "Georgetown boys" were dispersed among Ontario farmers either as foster children or as contracted farm labourers.

Destabilization in the Middle East, liberalization of Canada's immigration laws, and withdrawal of the Asiatic classification of Armenians generated a flow of Armenians to Canada (1950s,1960s). They came largely from urban centres in Middle Eastern and Mediterranean countries in which Armenians had taken refuge after the genocide, and they settled principally in Montreal and Toronto. In Montreal, settlement moved along Park Avenue to Ville St. Laurent and into Laval. In Toronto, Armenians are dispersed throughout the city but have built community structures in northeast Metropolitan Toronto.

Armenia was the first nation to adopt Christianity as the state religion. The majority of Armenians in Canada belong to the Armenian National Apostolic Church, an autocephalic church with the Mother See in Echmiadzin, Armenia. In 1930 Armenians constructed their first church, St. Gregory the Illuminator, in St. Catharines, Ontario. Following the Communist takeover of Armenia in 1920 and the subsequent subjugation of Echmiadzin, many anti-Communist Armenians in the diaspora split from the Mother Church and looked for religious leadership to the See of Cilicia, located in Beirut, Lebanon. The two groups differed only in their political affiliations. Following Armenian independence and the election of Catholicos Karekin II of Cilicia to the Catholicosate of the Mother See in Echmiadzin (1995), there was hope of church reunification.

In 1960 Montreal and Toronto Evangelicals founded their first churches. Though some Evangelical congregations are affiliated with the United Church of Canada, they are autonomous and have services in the Armenian vernacular language.

The Armenian Revolutionary Federation (Tashnag) was the dominant nationalist political force in Canada for almost 100 years (established in Brantford, 1902-04) and today ranks as one of the largest political organizations in Canada. Another large political group in Canada is the Armenian Democratic Liberal Party (Ramgavar), which upholds a conservative, pro-church ideology. Ramgavars established in Montreal in 1963 and have chapters in Toronto and Vancouver. The Social Democrat Hunchagian party started branches in Canada before 1914 but succumbed to Communist attacks in the 1920s. A small group reorganized in Montreal and Toronto in 1979-80.

Genocide and the fear of national extinction have spurred Armenians to preserve and enhance their ethnic heritage in Canada. Much of Armenian-Canadian culture focuses on the genocide, particularly in the light of the Turkish government's continued denial of the genocide. Each year Armenians gather at services to pay tribute to those lost in the genocide.

A branch of the Armenian Relief Society (ARS) was formed in Brantford in 1910. The principal objective of the ARS is to aid Armenians in distress and enhance Armenian education and culture. The Armenian General Benevolent Union has a similar purpose, and since its revival in Canada in the 1970s it, too, has made contributions to the consolidation of Armenian community life. Most institutions and organizations have sports and youth programs, including scouts and guides.

For more than 100 years Armenians in Canada have had two major agendas: community development in Canada and assistance to the homeland. Turmoil in the Armenian and Karabagh republics has rallied the community. An earthquake (1988), a blockade by Azerbaijan (1989) and Turkey, and a drawn-out war with Azerbaijan over the disputed Armenian enclave of Nagorno-Karabakh (1988) set in motion a vast variety of activities to help, attesting to the diversity and vibrancy of the Armenian-Canadian community.