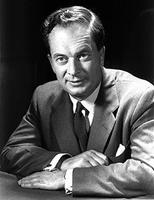 Dunton oversaw much of the development of the CBC and was co-chair of the influential B&B Commission (courtesy Library and Archives Canada/PA-157772).

Arnold Davidson Dunton, public servant, educator (b at Montréal 4 July 1912; d at Ottawa 7 Feb 1987). He was educated at Lower Canada College, Montréal, and at universities in Canada, France, Britain and Germany. He worked as a reporter on the Montréal Star 1935-37 and as associate editor 1937-38 and was editor of the Montréal Standard in 1938. He joined the Wartime Information Board in 1942 and was general manager 1944-45. In late 1945, at age 33, he was appointed the first full-time chairman of the Canadian Broadcasting Corporation.

Throughout the controversies that arose over the funding and regulation of the new medium of television, Dunton was a persuasive defender of the corporation's independence and a strong advocate of the need to fund publicly a television system that would be of great national benefit. Shortly after the CBC completed its network from coast to coast in July 1958, he resigned and became president of Carleton University. Dunton was widely commended for the tact and intelligence with which he had overseen the development of the CBC.

He was appointed cochairman of the Royal Commission on Bilingualism and Biculturalism in 1963, which has profoundly influenced federal government language policies. He stepped down as Carleton's president in 1972 to become director of the Institute of Canadian Studies at Carleton 1973-78 and later fellow of the Institute. He was a Companion of the Order of Canada and received honorary diplomas from 7 Canadian universities.