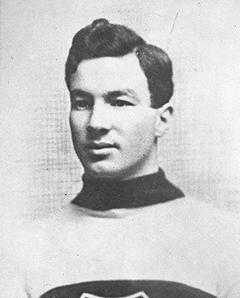 Art Ross, during his time as defenceman with the Montreal Wanderers.

Many accounts of Art Ross’s early life contain inaccuracies. Most hockey records list his birth date as 13 January 1886. Ross himself used this date for most of his life, but there is no birth certificate to confirm this date. However, three sources show his birthdate as 13 January 1885: records from his year at Bishop’s College School in Lennoxville, Québec, in 1898–99; employment records from the Merchants Bank of Canada, where Ross got his first job in 1903; and his business listing in a 1915 guide book to Montréal. Family genealogists therefore believe 1885 to be a more likely date.

Ross’s father, Thomas B. Ross, and his paternal grandfather, Simon Ross, both worked for the Hudson’s Bay Company. The family had long been based in the Saguenay district of Québec, but Thomas Ross transferred to the Huron district in Ontario around 1876. Art Ross was born at a trading post on Whitefish Lake, not far from Naughton, Ontario, which is now part of the city of Sudbury. His middle name has often been recorded as Howie, but this is incorrect, as it should be spelled “Howey.” Ross was named after his godmother Florence Howey, the wife of William Howey, a doctor with the Canadian Pacific Railway who came to the Sudbury area in 1883. Ross was the ninth of 10 children in his family (though older hockey stories often said he was the 12th of 13). As part of life at the trading post, he and his siblings grew up speaking English, French and two Indigenous languages: Ojibwa and Montagnais.

The relationship between Art’s parents deteriorated, and eventually they separated. On 23 December 1895, his mother Margaret remarried to Peter McKenzie, chief factor with the Hudson’s Bay Company. Ross and at least five of his siblings moved with her to Montréal, where the family lived in a large house in Westmount.

According to Ross, he first learned to skate on Whitefish Lake, using blades made by local Ojibwa using materials purchased from his father’s trading post. However, it was in Montréal that he developed his great skill in sports, including baseball, basketball and boxing. Later, he would become a top motorcycle racer. He also played hockey in Montréal, but football (usually referred to as rugby in Ross’s time) was both his best and favourite sport. Though he grew up playing with future hockey stars Frank and Lester Patrick, it wasn’t until the winter of 1905–06, when he moved to Brandon, Manitoba, that Ross became a hockey star himself.

Ross quickly earned a reputation as a top defenseman in Manitoba. In January 1907, the Kenora Thistles added him to their roster for a Stanley Cup challenge against the Montreal Wanderers. Playing in Montréal, his hometown, Ross helped the Thistles defeat the Wanderers to win the Stanley Cup. He finished the 1906–07 season back in Manitoba with the Brandon hockey club, but returned to Montréal that fall to join the Wanderers for the 1907–08 season, winning his second Stanley Cup with his new team.

Until the 1906–07 season, hockey in Canada had been an amateur sport. In 1906, however, the sport’s top league, the Eastern Canada Amateur Hockey Association, decided to allow professional players. Top teams like the Wanderers began paying good money for professional players. Although Ross opened a successful sporting goods business in Montréal in 1908, he demanded top dollar as a hockey player as well. Sometimes, he hired himself out as a paid “ringer” to teams in other leagues for big games. Ross’s highest salary came with the Haileybury Comets of the National Hockey Association (NHA) in 1910–11, when he earned $2,700.

In 1911–12, Ross returned to Montréal to play for the Wanderers. He soon became part of team management as well, but always supported his fellow players in contract talks. During a salary dispute in the fall of 1914, Ross became involved with plans to create a new hockey league. When the plan fell through, he found himself banned for life from the NHA. The ban was later reduced to a two-week suspension, but the Wanderers didn’t want him back. Ross joined the Ottawa Senators for the 1914–15 season, and helped them win the NHA championship, although they lost the Stanley Cup to the Vancouver Millionaires of the rival Pacific Coast Hockey Association (PCHA). 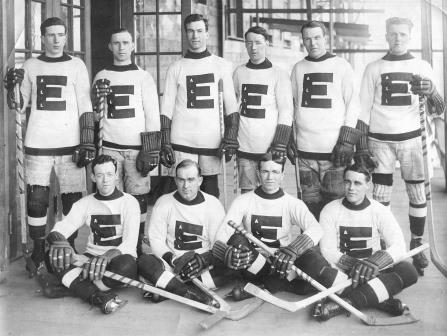 After two seasons with Ottawa, Ross returned to the Wanderers in 1916–17. A year later, he was a player, coach and general manager with the Wanderers when the NHA disbanded and the team entered the newly created National Hockey League for the 1917–18 season. Around this time, many athletes enlisted to fight in the First World War, and player shortages hit the Wanderers hard. On 19 December 1917 — the first game night in NHL history — the Wanderers defeated the Toronto Arenas 10–9. However, they lost their next three straight games by lopsided scores. The team owner felt his club couldn’t compete, and when a fire destroyed their home arena on 2 January 1918, the Wanderers withdrew from the NHL.

After 12 years as one of the top stars in hockey, Ross’s playing career was over. He had skated in just three games in the NHL (and scored only one goal), but would soon make his mark in the new league in a very different way.

While operating his sporting goods store and racing motorcycles in the summer, Ross worked as an NHL referee from 1918–19 to 1921–22. In 1922–23, he became coach of the NHL’s Hamilton Tigers. As a player, he had always kept himself in top shape, and as a coach, he worked his team hard. Still, Hamilton finished last in the four-team NHL standings for the third year in a row with a record of just 6–18–0. He had much more success working with the amateur Tigers in the Ontario Hockey Association, but did not return to Hamilton the next season (1923–24), instead working as a referee.

In fall 1924, Charles Adams hired Ross to run his new team, the Boston Bruins, the first American-based NHL franchise. Ross would serve as coach, general manager and vice president (often holding all three titles at once) until 1954. The Bruins were the worst team in the NHL (6–24–0) in 1924–25, but improved quickly. A key move came in 1926, when the team acquired a number of top players from the Western Hockey League (WHL). The WHL, a rival league that had replaced the PCHA, was no longer able to compete financially against the NHL and WHL president Frank Patrick decided to sell off their player contracts. Ross, who was a friend of Patrick’s, convinced Adams to offer $300,000 for the contracts of the WHL players. In the end, new franchises in Chicago and Detroit bought players directly from Patrick and the NHL oversaw the distribution of most other WHL players. Adams paid out only $50,000, but the Bruins landed several top stars, including Eddie Shore, who would become the heart of the Boston franchise.

The Bruins reached the Stanley Cup Finals in their third season (1926–27), but lost to the Ottawa Senators. Before the 1928–29 season, Art Ross added two more future Hall of Famers to the lineup: goalie Cecil “Tiny” Thompson and centre Ralph “Cooney” Weiland. Former Ottawa star Cy Denneny was brought in as player and as an assistant to Ross. The Bruins also moved into the Boston Garden, which would be their home until 1995. Boston won the Stanley Cup for the first time in 1928–29, defeating the New York Rangers in the first all-American championship final. In 1929–30, the Bruins went 38–5–1 during the 44-game season for an .875 winning percentage that remains the highest in NHL history. The team reached the Stanley Cup Finals again, but was upset by the Montreal Canadiens.

Boston remained a top team throughout the 1930s, but always came up short in the playoffs. Art Ross stepped down as coach between 1934 and 1936, but was back behind the bench in 1936–37 and guided the team to another Stanley Cup title in 1938–39. The Bruins won again with Cooney Weiland as coach and Ross as general manager in 1940–41, but the team fell on hard times after the Second World War, when many players, including several top stars, left to serve in the Allied forces (some in the Royal Canadian Air Force). Ross stepped down permanently as coach in 1945, and retired as vice president and general manager in 1954.

Boston Bruins owner Charles Adams wanted a tough team, and Art Ross built it. Ross himself was intense behind the bench, banging on the boards to get the attention of his players and the referees, at whom he often shouted abuse.

As a coach, Ross had a great talent for managing the game and deploying his forward lines to best advantage. He expected his players to be in shape and play smart hockey, and spent little time coaching the fundamentals of the game. As a general manager, he was a tough negotiator of contracts, no longer as supportive of players’ rights as he’d once been. Managers and owners of other teams often found him difficult to deal with in league business as well. Ross and Conn Smythe, owner of the Toronto Maple Leafs, carried on a personal feud for much of their careers.

Art Ross designed his own brand of hockey equipment (including skates, sticks and uniforms) that he sold from his sporting goods store in Montréal during the early 1900s. He also introduced a new design for goalie nets in 1927–28 that helped to prevent pucks from bouncing out and therefore reduced the number of disputed goals. (The NHL used the Art Ross net through the 1983–84 season.) He also created a better puck with beveled edges, which was first used by the NHL in 1918–19. In 1940, the Art Ross puck was patented. It was used exclusively as the official puck of the NHL from 1942 until 1968. 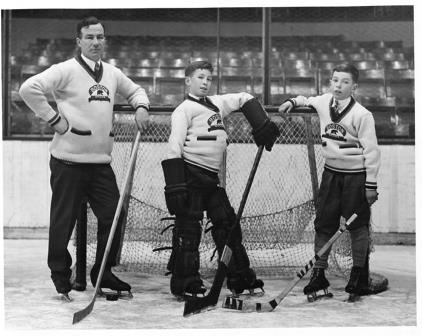 Art Ross poses with sons Arthur (centre) and John in front of an Art Ross net, circa 1929.

Ross was also instrumental in several rule changes. Though he began his hockey career when most players were expected to play all 60 minutes of the game, he was an early advocate for unlimited substitutions and strongly supported the NHA’s decision in 1911–12 to eliminate the position of rover and move to six-man hockey. Ross also supported the NHL’s decision in 1917–18 to allow goalies to drop to the ice to make a save. Goalie Clint Benedict’s habit of slipping to his knees to make saves is usually given as the reason for this decision, but Ross had earlier spoken out in favour of the change, which his friends Frank and Lester Patrick had already introduced in the PCHA.

After joining the Bruins, Ross spent many years on the NHL’s Rules Committee. Among the key rule changes spearheaded by Ross were to allow forward passing in every zone on the ice and to penalize icing with a face-off in the zone of the offending team.

Today, Art Ross is best known for the Art Ross Trophy, which he and his sons, Arthur and John, donated to the NHL in 1948. Since the 1947–48 season, the Art Ross Trophy has been presented to the NHL’s leading scorer. Ross was a governor of the Hockey Hall of Fame when the first inductions were made in 1945, and though he is often listed as being one of the original inductees, he was not actually elected to the Hockey Hall of Fame until 1949.

Ross passed away at a nursing home in the Boston suburb of Medford, Massachusetts, on 5 August 1964. He was posthumously elected to Canada’s Sports Hall of Fame in 1975 and was awarded the Lester Patrick Trophy for his service to hockey in the United States in 1984.