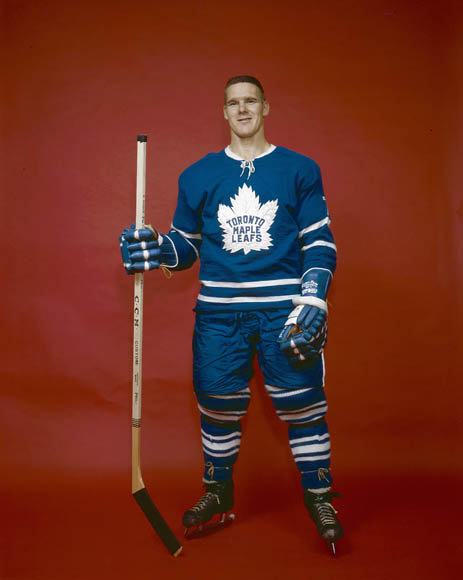 Miles Gilbert (Tim) Horton, hockey player, entrepreneur (born 12 January 1930 in Cochrane, ON; died 21 February 1974 in St. Catharines, ON). Horton was one of the best defenseman from the National Hockey League’s Original Six Era and spent the majority of his career with the Toronto Maple Leafs. A fixture on the blue line, he was well regarded for his imposing strength and skill. As a member of the Leafs, Horton was part of four Stanley Cup–winning teams. While many know of Horton because of his professional hockey career, for many more his lasting legacy is his eponymous coffee franchise, ​Tim Hortons.

Miles Gilbert Horton was born in early 1930 to Ethel and Aaron Horton in Cochrane, Ontario, over 700 km north of Toronto. Named after both his grandfathers, his mother actually preferred the name “Tim” and from birth it became his unofficial name.

The Horton family moved to Duparquet, Québec, in 1936 and it was there where Tim first learned to play hockey . They did not stay long in Québec and the Hortons returned to Cochrane after only a few years. Back in northern Ontario, Horton continued to hone his hockey skills. In his last game in Cochrane he scored eight goals, leading his team to victory. At 15, Horton and his family moved to Sudbury, where he started playing for the Northern Ontario Junior Hockey Association's Copper Cliff Jr Redmen in the 1946–47 season. Horton was gaining a reputation as a strong defenseman, but also demonstrated that he could skate and score like a forward.

A year later he was scouted by the Toronto Maple Leafs and signed a contract with the team, which allowed him to attend St. Michael's College to play junior hockey and continue his schooling. He began playing on the college hockey team, the Majors, in the Ontario Hockey Association (OHA). Colloquially known as the St. Mike’s Majors, they were also a farm team for the Toronto Maple Leafs. In his first season, Horton racked up the most penalty minutes in the OHA with 137. Although he made the Leafs' reserve list in 1947, he was not quite ready for the National Hockey League. The following season (1948–49), he continued to hone his reputation as a tough defender, but also demonstrated his finer skills, earning top honours in the OHA as the league’s best defenseman.

In September 1949, Horton was invited to the Maple Leafs’ training camp in St. Catharines, Ontario. He made a strong showing at camp, which led to a contract with the Pittsburgh Hornets, the Leafs’ farm team in the American Hockey League.

To prepare Tim Horton for his eventual role with the Toronto Maple Leafs, owner Conn Smytheoffered him a three-year contract to play for the Pittsburgh Hornets, the team’s American Hockey League (AHL) affiliate. Horton made his professional hockey debut with the Hornets in the 1949–50 season. In his second season with Pittsburgh, he was part of the championship team that defeated the Providence Reds for the 1952 Calder Cup.

During his stint in the AHL, Horton played a few games with the Leafs, but after his victorious season with the Hornets, he soon found himself playing full-time in Toronto.

Tim Horton began playing full-time with the Leafs in the 1952–53 season, the start of what would be a long career as a stalwart on Toronto’s blue line.

Early in his career with the Leafs, Horton suffered a serious injury. With just a few weeks remaining in the 1954–55 season, he broke his jaw and leg in a bone-shattering collision with the New York Rangers’ Bill Gadsby. The injury kept Tim off the ice for almost half of the following season; and after returning, he was slow to find his game.

Between 11 February 1961 and 4 February 1968, he played in 486 consecutive games for the Leafs, a club record that remains to this day. More importantly, he was an integral part of four Stanley Cup–winning teams, including three consecutive victories from 1962 to 1964.

On 3 March 1970 he was traded to the New York Rangers, ending a career with the Leafs that spanned nearly two decades and included 1,185 games. A year later, and despite announcing his wish to retire, the Pittsburgh Penguins claimed him in an intra-league draft. He eventually signed with Pittsburgh and played for them until 1972, when he was, once again, picked in another intra-league draft, this time by the Buffalo Sabres. At the time, the Sabres’ coach and general manager was Punch Imlach, Horton’s coach during his glory days with the Leafs. Imlach knew Horton well, and valued the skill and experience he would bring to the upstart franchise in Buffalo.

Following a game in Toronto, Tim Horton opted to drive home to Buffalo in his Ford Pantera instead of taking the team bus. In the early hours of 21 February 1974, Horton lost control of his sports car and was killed on the Queen Elizabeth Way highway near St. Catharines. He had been driving exceptionally fast (more than 160 km/h) and was under the influence of alcohol. News of his death hit the National Hockey League hard and some of his Sabres teammates were so overcome with grief that many could not suit up for Buffalo’s next game.

The outside of a Tim Hortons Coffee Shop during the day. Photo taken on: May 19, 2014 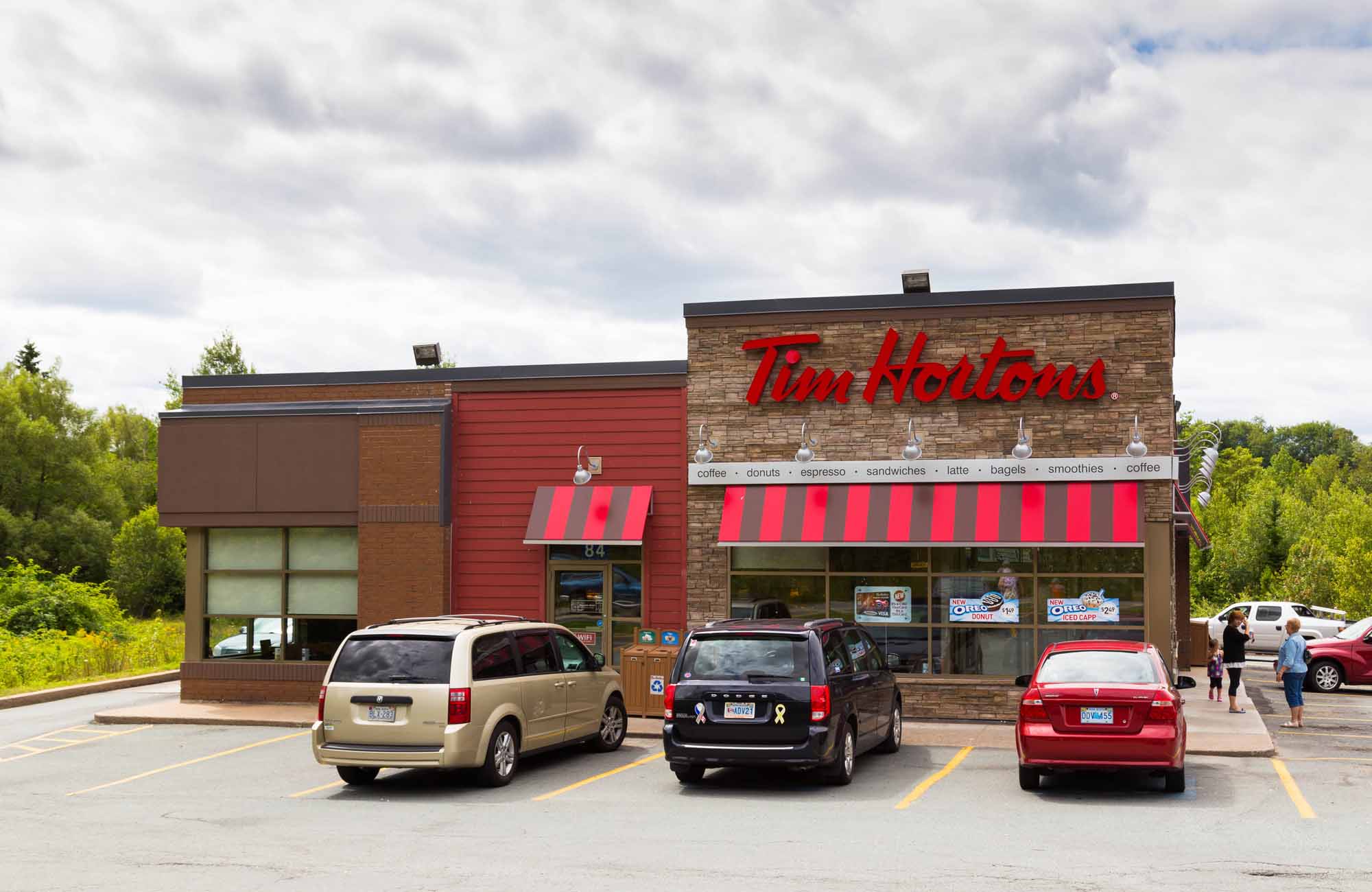 The outside of a Tim Hortons Restaurant in Halifax. Photo taken on: August 21, 2014
PreviousNext

Tim Horton was an elite player on one of the league’s most storied franchises, but players in the Original Six era did not earn the types of salaries that we associate with contemporary NHL superstars. As Tim had a large family that included wife Lori and four daughters (Jeri-Lyn, Kim, Kelly and Tracy), he often worked in the offseason to supplement his income. While Horton had picked up summer jobs that included working at Brewer’s Retail (The Beer Store) and Conn Smythe’s gravel company, he also had an entrepreneurial spirit that led him to pursue business ventures. These included a hamburger restaurant in Scarborough and a car dealership in Toronto. He and his brother, Gerry, also opened another restaurant, the Big Seven, in North Bay, Ontario, in the 1960s. It would be another eatery, however, that would cement Tim Horton’s legacy.

In 1964, Horton established a little coffee and donut shop, then known as "Tim Horton," that would eventually become a well-established Canadian franchise. Horton opened his first coffee and donut shop on Ottawa Street in Hamilton, Ontario, selling coffee for a quarter and featuring his own personal creations, the apple fritter and the Dutchie. The shop was an enormous success. Horton decided to expand it into a franchise, choosing Ron Joyce as the store's first franchisee. The Hamilton store then became the model for a giant Canadian chain, with Ron Joyce and Horton as full partners.

In 1974, the year Horton died, Joyce established the philanthropic Tim Hortons Children’s Foundation. The following year, he purchased the Horton family’s shares in the company. In 1995, ​Tim Hortons was purchased by Wendy’s International, Inc. That same year, the 1,000th franchise opened in Ancaster, Ontario, not far from the original shop. In 2006, Tim Hortons initiated plans to become a public Canadian company once again, a corporate restructuring that was completed in 2009. Five years later, Tim Hortons merged with Burger King in a high-profile deal worth more than $12 billion.

Currently, there are over 3,500 Tim Hortons franchises across Canada, almost 1,000 in the United States and 38 in the Persian Gulf. Unfortunately, Horton never got the chance to see a franchise in his hometown of Cochrane. The northern Ontario town did not get its own Tim Hortons until 1994, thirty years after Horton established the first shop in Hamilton.

The company reflects Tim’s love of sports through its Timbits Minor Sports Program. Each year Tim Hortons sponsors thousands of children, between the ages of four and eight, across Canada and the United States, in order to help them participate in sports such as soccer, baseball, and — of course— hockey.

While Tim Horton's most enduring popular legacy is his coffee and donut franchise, he has also been both remembered and recognized for his contribution to the Toronto Maple Leafs during his nearly 20-year tenure with the team. He continues to be remembered as one of the strongest players of the game. In 1,446 regular-season NHL games, Horton scored 115 goals, made 403 assists and racked up 1,611 penalty minutes.

During his career, Horton played on four Stanley Cup teams, was named to the NHL’s First and Second All-Star team three times each, and was honoured in 1969 with the JP Bickell Memorial Cup. In 1977, he was posthumously inducted into the Hockey Hall of Fame. During the 1995–96 season, the Buffalo Sabres retired Horton’s No. 2 to the rafters and the Maple Leafs also honoured his No. 7 that he wore during his tenure in Toronto. In 1995 he was also elected to the All-Time Greatest Maple Leaf Team. His hometown of Cochrane has paid tribute to Horton by establishing a museum in his honour, which is part of the Tim Horton Events Centre.