Ashcroft, BC, incorporated as a village in 1952, population 1628 (2011c), 1664 (2006c). The Village of Ashcroft is situated on a flat bench above the Thompson River in the dry belt of the interior of southern British Columbia, about 90 km west of Kamloops. Ashcroft was named after Ashcroft Manor, the estate of Clement and Henry Cornwall, who came from England in 1862. They were ranchers on a large scale who built a stopping house (1863) on their property along the Cariboo Road. Clement became a member of both provincial and federal parliaments, was a senator and served as British Columbia's lieutenant-governor (1881-87).

In 1883 a townsite was surveyed on the property of 2 founding fathers of Ashcroft, John C. Barnes and E.William Brink. Ashcroft's history began with the coming of the Canadian Pacific Railway in 1884. A bridge was built over the Thompson River and Ashcroft became the railhead for the north and the third Mile "0" for the Cariboo Road (after Lillooet and Yale). Once a road was built to link the railway to the old Cariboo Road, Ashcroft quickly replaced Yale as the gateway to the Cariboo, and for the next 30 years it served as a major supply centre for the goldfields in the north.

The famous pioneering stage and mail company Barnard Express (later British Columbia Express) carried supplies to Barkerville with heavy freight wagons drawn by teams of 4 to 8 oxen, mules or horses, and stagecoaches carried mail and passengers north and gold south on the return trip. When the Cariboo Road was upgraded to accommodate mechanized transportation, and the Pacific Great Eastern Railway (see British Columbia Railway) pushed through from Vancouver to the Cariboo about 1914, Ashcroft lost its position as the main supply centre for the north. The area turned to agriculture and a tomato cannery was opened in 1925, which helped to sustain the town through the Depression years and World War II. Over the years fires have taken their toll on the old downtown area, although a few historic buildings such as the Opera House survive. Mining breathed new life into the economy in the 1960s, and now Ashcroft mainly acts as a supply centre for the Highland Valley copper mining complex to the east. 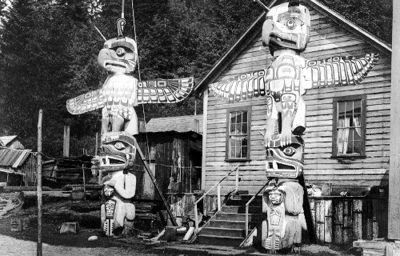