In André Forcier's fourth feature film, Au clair de la lune (1983), a former bowling champion lives in his 1971 green Chevrolet sedan behind Montréal's Moonshine Bowling Alley. One night he discovers a man almost frozen to death, and revives him. While Bert (Guy L'Ecuyer) dreams of winning back his bowling title, François (Michel Côté), who claims to be from the mythical land of Albinie, can literally walk on air. François moves into the car with Bert, and the two form a relationship of astonishing tenderness.

Au clair de la lune is not as bleak as Forcier's Bar Salon, but it again deals with people on the margins of society without moralizing or feeling sorry for them. The story of Bert and François is rooted in Québec society - when the Québec cabinet minister Pierre Laporte was murdered in November 1970, his FLQ killers stuffed his body into the trunk of the same model of green Chevy - yet its theme is universal. Au clair de la lune is a very sad, poetic film about abandoned people yearning for miracles, and it is as much historical allegory as it is surreal slapstick comedy.

Au clair de la lune was shot in 1979 but did not receive commercial distribution until 1983. It was written collectively by Forcier, L'Ecuyer, Côté, and several others and received 4 Genie Award nominations in 1984, for best costume design, best direction, best score and best actor (L'Ecuyer). 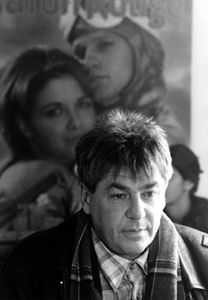