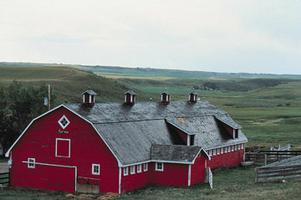 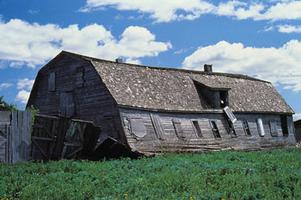 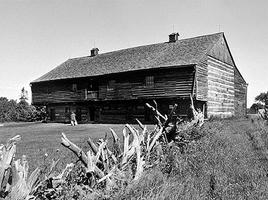 Built in 1809, this is an outstanding example of Pennsylvanian German log construction in Ontario.
PreviousNext

Barns, like certain of our native birds and animals, have joined the ranks of "endangered species." No funds from wealthy societies, heritage trusts or governments are spent on the purchase and preservation of our oldest barns, and their demise can be expected. Changes in agricultural economy have caused many farmers in Canada to go bankrupt and farms to be abandoned. On farms that are still prosperous, new barns have often been built that lack the cultural and architectural interest of barns from earlier years.

Barn design has always been affected by regional inherited customs and by available building materials. Building materials were often timber, brick and stone for exteriors; wood shingles, slate and thatch for roofs. Though slate is rare, thatch in Québec is extinct. It was never as durable or weather resistant as thatch in countries where reeds were used in the composition; Canadian thatch was usually straw.

For the barn enthusiast with a camera it is rewarding to find a well-designed old barn built with any of these materials on walls and roof; and nothing is more shocking than to see a barn, perfect in form, covered by a galvanized roof or with walls protected by shining aluminum sheathing. The all-aluminum sheeted barn is now a common sight, and the barn of the future will likely be of metal or other weatherproof, prefabricated material.

In form and function Canadian barns are classified as Pennsylvania, Dutch and English. In all eastern regions, barns that are circular or polygonal are infrequent except in Québec, where many examples abound, immaculately maintained and painted in the brightest hues. The connected barn is of ancient origin and few remain in Canada. Of the types mentioned, the Pennsylvania is most common except for the little English barn. The majority are sheeted in timber planks, but there are superb examples in stone and more permanent materials. However, it is not for their construction that they are important, but for their form and function.

A typical site is one with a southerly exposure on rising ground. The barn is built with its great doors opening at the upper level onto what is called the threshing floor, which is actually a broad aisle flanked by stout, squared timbers in bays stretching from floor to ceiling. The granary, opening off the threshing floor, is neat, well-built in consideration of its precious contents, and is divided into 6-8 bins separated by a passage. At the close of the season, the threshing floor is filled with farm machinery. During the autumn and winter, hay is lowered by chute to the cattle below.

For the housing of animals, the Pennsylvania barn is outstanding. Usually the upper structure, or mow, is cantilevered as much as 2.4 m, an admirable invention because of the shelter it gives the cattle in the byre behind the barn. Nearly all Canadian Pennsylvania barns are built of pine planks, but in Pennsylvania some of the finest are stone or brick, or combinations of stone or brick gable-ends with timber vertically or horizontally nailed on the projecting mow.

The Dutch barn can be seen at its best on each side of the Hudson River, but there are Canadian examples. Its plan can be easily remembered - the only barn type with main doors at the end and not on the side. This barn plan, sometimes called Basilican, has a "nave" or threshing floor and aisles, on one side for cattle and on the other side for horses. Historically, in Holland, women servants slept over the cattle and men over the horses.

A fascinating historic feature of the early Dutch barns in Holland was the living space at the "sanctuary" end of the Basilican prototype. There, furniture could be arranged around a centrally placed fire and flanked on 2 sides by bedrooms or built-in beds which would be lowered for sleeping. The farmer could be seated so that he had supervision over the threshing floor, horses and cattle. One barn has been saved for Upper Canada Village, and though it has the central door, the structure has been anglicized by eaves that are higher than the prototypes in Holland or the Hudson River region.

A very curious survival of the ancient plan is a barn built (1906) at Weyburn, Saskatchewan. Externally it shows no signs of the traditional type with low eaves and central door, but the family lived under the same roof as their animals; living quarters were 6 m in depth and consisted of 2 storeys, the upper being bedrooms. The ground-floor door and windows overlooked the threshing floor.

The ubiquitous little English barn gets its name from one of identical use and form in Britain. It has a central threshing floor, with space to the left for threshed grain and on the right for unthreshed grain. This barn, whose measurements were often as little as 16.8 x 7.6 m, flourished at a period when wheat cultivation dominated agriculture. When more room for storage became necessary after a bountiful harvest, the threshing floor was extended by one bay with a loft overhead. To achieve this, a pine beam of awesome dimensions was cut from the kind of tree then to be found in the primeval forest. Square holes show where joists were once fitted to hold the floor and its load.

Farmers were reluctant to use part of the barn for cattle during a period of agricultural change, and after the old barn was left to its original uses, a small cattle barn was built at right angles to the old, or with still further need, a third barn for horses would be added to form a 3-sided court. At Carleton Place, Ontario, the ultimate was reached with a piggery which filled the gaps and created an inner court, a sheltered place with many uses. At one time the house was attached to the barn. The idea of having the farmer in such an intimate relationship to his animals and storage was good, but fires could be devastating. The only remaining example in Canada is the barn in Weyburn, Saskatchewan.

The French Canadians showed much ingenuity and a love of primary colours in barns. Their barns were usually long and low, with a surprising number of circular and polygonal shapes adding variety to the traditional single-storey rectangles. They had tight-tongued and grooved, painted walls. Where wooden barns elsewhere relied for ventilation on shrinkage of boards, the Québecois provided it by cupolas placed on ridges. In clapboard walls on barns outside of Québec City the cracks allowed the free passage of air and permitted a host of pigeons, numerous owls, swallows, mice and cats to enter.

The Québec barn is pre-eminent for decoration in paint, and its plain surfaces give the farmer ample opportunity for the display of colour. In many old barns outside of Québec City, farmers take advantage of flat areas to demonstrate the raison d'être for their operations, and large faded paintings of cows or horses are a rewarding sight. One very spirited painting of horses in motion can be seen at Petit Chocpiele in NB. It is a mural and approaches the standards of fine art rather than the vernacular (see Folk Art).

Carved stone lintels on wooden barns were used for decoration. An excellent example still exists. Lettering in stone has been moved from a barn in Erin Township, Ontario, to a stone wall at Rockwood Academy, Rockwood, Ontario. The inscription (1863) reads: "When your barn is well filled all snug and secure, Be thankful to God and remember the poor."