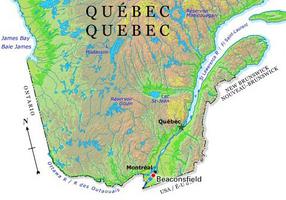 Beaconsfield, Qué, City, pop 19 194 (2006c), 19 310 (2001c), inc 1910, following its separation from the municipality of Saint-Joachim-de-la-Pointe-Claire. Beaconsfield is located in the southwestern corner of Île de Montréal, fronting the shoreline of Lac Saint-Louis.

Beaconsfield is a reference to Benjamin Disraeli, 1st Count of Beaconsfield (1804-80), Queen Victoria's favourite prime minister. The Honourable J.H. Menzies, a great admirer of Disraeli, changed the name of a large property he had bought on the shore of Lac Saint-Louis from Le Bocage, in honour of his friend. The name, which stuck to a point of land jutting out into the lake and eventually to the post office which was opened in 1904 to serve the local population, was chosen when it was incorporated as a city in 1910.

This largely English-speaking community, in what is commonly referred to as the West Island's Lakeshore District, is a member of the Montréal Urban Community. It is mainly residential in nature.