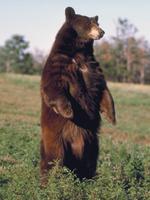 The distinctive features of the polar bear (Ursus maritimus), the grizzly bear (Ursus arctos horribilis), and the black bear (Ursus americanus) (artwork by Jan Sovak).
Black bears, the most common and widespread in Canada, may also be brown or cinnamon (Corel Professional Photos).
PreviousNext

Infrequent attacks on humans have been made by grizzly (or brown), black or polar bears. Bears can run at speeds exceeding 50 km/h, are significantly stronger than people and can inflict serious injury. However, most bears, but especially black bears, are normally tolerant of people. Black bears and, to a lesser extent, grizzly bears and polar bears, use aggressive displays such as charging, but stop short of contact or vocalize loudly to get people who have come too close to move away. It is hard to predict the behaviour of individuals because bears learn readily and have distinct personalities. Despite these limitations, accurate records of attacks have been used to describe and understand the rare attacks made on people.

One of the most common circumstances associated with a grizzly bear attack is the "sudden encounter," especially with a grizzly bear female and her young. Here, people hiking are typically unaware of the bear until less than 50 m separates them, and attack occurs. To decrease chances of such incidents, people should avoid areas where grizzly bears are likely to be found or be alert when travelling through them. Warning noise may help prevent incidents, as may "playing dead" if attacked.

Unlike grizzly bears, black bears almost never attack in "sudden encounters." The typical injury inflicted by the black bear is minor and occurs in or nearby roadside camp grounds or other areas where black bears try to scavenge food or garbage, and in the process scratch or lightly bite a nearby individual. Individuals should back away from such "attacks," watching the bear.

Only 5-10% of injuries inflicted by the black bear are serious. These rare incidents typically occur in rural or remote areas. In many of these cases black bears have attempted to or have preyed on people. Between 1900 and 1986, an exhaustive search revealed records of 27 deaths inflicted by black bears throughout North America.

A detailed, N American-wide search for records of attacks by polar bears revealed only 20, of which 5 were fatal. Male polar bears occasionally stalk and attempt to prey on people. Knowledge of the polar bear habitat, constant vigilance and a firearm are essential elements of safety around polar bears.