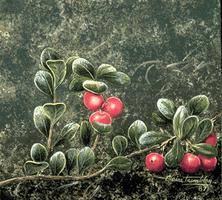 Bearberry grows across Canada on dry sandy soils and is valuable as ground cover for checking erosion on watersheds (artwork by Claire Tremblay).

Bearberry grows across Canada on dry sandy soils (often called sandberry), but is also found on gravel terraces, sand dunes and in the boreal forest, and is valuable as ground cover for checking erosion on watersheds. It is less common above the treeline. Kinnickinnick [Algonquian, "that which is mixed"] leaves were combined with tobacco and smoked by Blackfoot and other native groups in religious ceremonies.

Bearberry extract has a high content of tannic and gallic acids which make it an astringent. It also contains arbutin, which becomes a germicide in the renal tract. The Thompson tribe of BC used it for kidney diseases, and the Blackfoot made an infusion for sore gums, and salve for skin diseases.