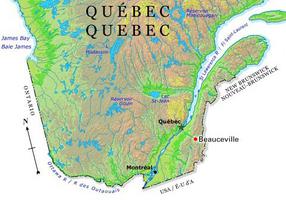 Beauceville, Qué, Town, pop 6226 (2006c), 6261 (2001c), inc 1998. Beauceville was first incorporated as a town in 1904 and merged with Beauceville-Est in 1973. In 1998 it merged with Saint-François-de-Beauce (pop 1357, 1996c) and Saint-François-Ouest (pop 1263) to form the current municipality. Beauceville is located about 80 km southeast of Québec City on the Chaudière River. It is the county seat of the regional municipality of Robert-Cliché and its industries include commercial printing, dairy and cheese products, rubber recycling, wood and textiles.

The history of the Beauceville area goes back to 1737 when the Seigneury Rigaud de Vaudreuil, or Saint-François-de-la-Nouvelle-Beauce, was granted to François-Pierre de Rigaud de Vaudreuil (1703-79). The name Nouvelle-Beauce refers to the Beauce Region of France, famous for its wheat production. Some of the early settlers came from the Québec City area, but more than 15 of the pioneering families, recruited in France, were faux sauniers, salt smugglers who had to go into exile.

Beauceville was the home of William Chapman (1850-1917), a poet and writer who left his mark on French Canadian literature.