On the newsprint wrapper in which the retooled Citizen arrived at the doorsteps of its 140,000 subscribers, Neil Reynolds, the brooding editorial wizard whom Black handpicked to direct the metamorphosis, laid out that agenda.

This article was originally published in Maclean's Magazine on March 17, 1997

On the newsprint wrapper in which the retooled Citizen arrived at the doorsteps of its 140,000 subscribers, Neil Reynolds, the brooding editorial wizard whom Black handpicked to direct the metamorphosis, laid out that agenda.This article was originally published in Maclean's Magazine on March 17, 1997 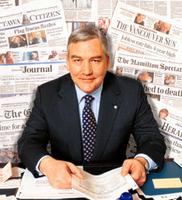 In an attempt to counter the hype and hoopla surrounding the launch of Conrad BLACK'S revamped Ottawa Citizen last week, its underdog rival, The Ottawa Sun, unleashed a puckish promotional stunt. Offering a $500 prize and a custom-made stuffed shirt, the tabloid invited readers to find a daily "Black spot" - a photo of the loquacious, 52-year-old press lord - hidden inside. The contest may have been, as Sun publisher John Paton puts it, "a knock at the new self-important Citizen." But it also underlined the parlor game currently preoccupying the capital and the country's media circles: trying to detect Black's influence in the daily that he has chosen to transform into the showpiece of the 58-paper empire he consolidated last May when he won controlling interest in Southam Inc.

On the newsprint wrapper in which the retooled Citizen arrived at the doorsteps of its 140,000 subscribers, Neil Reynolds, the brooding editorial wizard whom Black handpicked to direct the metamorphosis, laid out that agenda. In a bid for political clout - not to mention poaching rights on the Ottawa readership of The Globe and Mail - Reynolds claimed no less an intention than "to deliver the most authoritative national news report in the country." If his goal still appeared distinctly elusive at the end of a week, no one disagreed that he had pulled off a makeover that was as radically ideological as it was cosmetic. With an updated twist on a century-old logo, expanded editorial space and an infusion of $2 million in new cash, Reynolds's redesign packed a provocative one-two punch. While more attractive and substantial, it left some members of the government choking on their power breakfasts. As its opening salvo, Reynolds's new editorial-page team - two of whom he had recruited from Vancouver's right-wing Fraser Institute - offered a startling suggestion: Jean Chrétien, the paper opined, ought to think about stepping down before he wore out his welcome.

No sooner had that proposal hit the newsstands than prime ministerial aides were speed-dialing their contacts at the Citizen. Some were equally miffed that an exclusive interview with Chrétien had been buried on page 3. Others fumed that editorial page editor William Watson, a conservative economist from McGill University in Montreal who has taken a sabbatical to ply his talent for argument in Black's employ, had turned down a traditional post-budget briefing from minister of industry John Manley. Such disregard for capital ritual produced dark mutterings about "these guys' disdain for government," as one former Liberal insider put it - a charge at which Reynolds scoffs. "There's no question that this is a conservative editorial board," he says, fresh from conceding that his own politics reflect Black's unabashed rightward views. But his team was working flat out, he protests, with no time for ministerial dalliance. As for party leaders' displeasure at their poor display, he retorts, "If they wanted to be on page 1, they should say more."

In media circles, where Reynolds's maverick style and knack for winning National Newspaper Awards has earned him cult status, his retailored Citizen was greeted with greater enthusiasm. At Montreal's Concordia University, director of journalism Lindsay Crysler hailed Reynolds for bucking the prevailing trend of sacrificing thoughtful verbiage for visual gimmickry. "One of the nice things is that it's not USA Today," says Crysler, "which everybody has been doing in one form or another to attract the TV generation."

As at the Kingston Whig-Standard and The Saint John Telegraph Journal, where he spent the past four years, Reynolds has so far been careful to leaven the paper's conservative identity with contrary voices. Kathleen O'Hara, a self-described left-wing journalist who, last fall, publicly denounced Black's "stranglehold" on 43 per cent of the nation's dailies, was disconcerted last week when the Citizen ran one of her syndicated commentaries attacking the government. Now, O'Hara worries that she served as that day's "token lefty," lending credibility to the controversial fiefdom of Black's Chicago-based Hollinger International Inc.

To critics such as former Citizen editor-in-chief James Travers, who quit in October just before he was about to be pushed, Black's imprint on Reynolds's paper already seems clear. Pointing to a front-page spread featuring 15-year-old Nova Scotia beauty Katie Lee, who had snagged a national modelling crown, Travers argues that the paper has merely borrowed the mix perfected by Hollinger's British trophy, The Daily Telegraph, which he dubs "tits and analysis."

But Travers sees a more ominous threat in the paper's increasing copy from the Telegraph's wire service. In fact, Southam's rumored decision to close two more foreign bureaus this year - leaving its once-prestigious, eight-bureau news service with only three outposts abroad - is based largely on plans to use the British paper's international network. "It's very much an attempt to create a Canadian Telegraph," warns Travers, now Ottawa editor of The Toronto Star: "What you're seeing here is the re-colonization of Canadian journalism."

Still, those familiar with Reynolds's 15 years at the helm of the Whig-Standard consider his complicity in that prospect unlikely. Unfazed by that paper's modest circulation of 40,000, he won the venerable family-owned daily a windfall of awards and universal notice by dispatching a reporter and photographer to Afghanistan in 1986, where they broke the story of five Soviet army deserters. Reynolds professes puzzlement at why other editors of small-town papers have not shown the same chutzpah. "I don't understand why in this country there isn't more aspiration to greatness," he says.

That idealism he attributes to his coming of age in Kingston, the conflicted son of a Free Methodist minister. And at 56, the father of three - including two grown children from his first marriage - retains a romanticism that he betrayed in his first meeting with Citizen writers last fall. Quoting H. L. Mencken, he assured them, "There's a Hemingway in all of us." According to one attendee, who asked for anonymity, that injunction "left half of us, like me, blissed out and the other half rolling their eyes because it seemed so dated."

In fact, ever since Reynolds arrived in November, a preoccupied figure whose shyness kept him confined to his glass-walled editor's office - and earned him the moniker "Bubble Boy" - the Citizen's newsroom has been rent with turmoil and mistrust. On one side are the 10 newly hired Reynolds loyalists, some imported from his previous editorships. They include Whig-Standard veteran David Warren, the founding editor of Toronto's now-defunct Idler magazine, who will edit the paper's Sunday broadsheet, The Citizen's Weekly (which debuted with a 6,000-word cover story on the threat of mosquito-borne diseases by Reynolds's second wife, Donna Jacobs). On the other side are wary Citizen staffers: in at least one case, a deskman has killed a story by one of the editor's favorites only to find it in the paper the next morning.

Former colleagues point out that tension may typify Reynolds's management style. During three years as an assistant city editor at the Whig-Standard in the mid-1980s, "I can't tell you how many city editors we had," says Catherine McKercher, now an associate professor of journalism at Ottawa's Carleton University. "I'd come home at night and I'd think, 'Now if we could only get through this craziness, things will settle down.' But I finally realized that this level of churn was the way things were with Neil."

Still, McKercher remains an admirer. And she disputes those who see him carrying Conrad Black's political water. In Kingston, some of Reynolds's closest colleagues were unapologetic leftists. And in Saint John, he earned unassailable credentials for editorial independence: tackling a story on a tragedy at a gas station owned by his billionaire bosses, the Irvings, got him fired in 1994. Reinstated months later, he was promoted to publisher. McKercher argues that, "Conrad's agenda is more complex than just getting right-wing views into print. I think he's trying to counter the view that his papers are bad," she says, "and so he'll have a fancy paper in Ottawa to fend off the critics."

If so, Black has made a shrewd choice in Reynolds, who bridles at suggestions of proprietorial meddling but clearly shares Hollinger's editorial views. A former New Democrat, he counts as one of his life's "superb achievements" his ill-fated 1982 fling as head of the country's 80-member Libertarian party. Still, Reynolds remains sagely circumspect when asked if he would call Black a fellow Libertarian. "I wouldn't call Mr. Black anything," he says, "but Mr. Black."