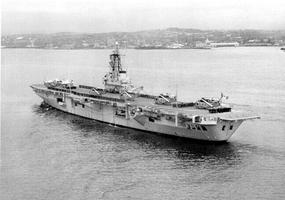 March 4, 1957, the first operational landing on the flight deck of HMCS Bonaventure. The Bonaventure was commissioned into the RCN January 17th, 1957. The aircraft carrier set new standards for all-weather, all-hours flying. Refit in 1966, the Bonaventure was de-commissioned on June 3rd, 1970, sold and eventually scrapped in Taiwan (RCN Photo by Kemball).

Bonaventure, light fleet aircraft carrier purchased 1952, commissioned 17 January 1957 as HMCS Bonaventure, the name of an island bird sanctuary in the Gulf of St Lawrence. With the latest equipment, jet fighters, helicopters, and propellor-driven antisubmarine patrol aircraft, it spent its career training air pilots, participating in naval exercises, and patrolling the Canadian coast. In 1964 it ferried a Canadian Army UN peacekeeping contingent to Cyprus.

Political controversy arose after a major refit in 1966-67, for which $8 million had been budgeted, cost between $12.5 and $17 million. As an economy measure, the government sold Bonaventure for scrap in 1970, although it could have had another 10 years of usefulness. It was not replaced. All Canadian fixed-wing naval aircraft have since operated from shore.