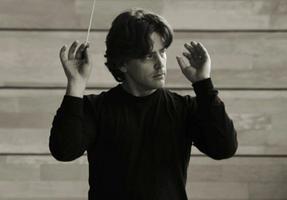 Current, who grew up in Ottawa, began studying piano when he was five, and joined the boys' choir of Ottawa's Christ Church Cathedral at age nine. He later sang in the Ottawa Regional Youth Choir, and during his teenage years performed in a local rock band, which sparked his interest in contemporary music. After graduating from McGill where he studied with Bengt Hambreaus and John Rea, Current did post-graduate work in composition at Berkeley and studied conducting with David Milnes. Two years earlier, he had taken part in the National Arts Centre Summer Training program in conducting, with Jorman Panula and Pinchas Zukerman.

Current has composed large-scale orchestral works, concertos, and works for solo instruments, chamber and choral music including chamber operas. He writes in an energetic and humorous style, often characterized by constantly changing textures and timbres. Fluctuating tempo is also a significant element in his music, as seen in For the Time Being (1999) and Symphonies in Slanted Time (2005).

Through his involvement with Esprit Orchestra education concerts and Ontario Institute for Studies in Education Music Teacher Workshops, Current has aimed to make contemporary music accessible to present-day audiences.

He is particularly committed to stimulating a love of serious music in young children. Using as models works with narrator such as the Young Person's Guide to the Orchestra (Benjamin Britten) and Prokofiev's Peter and the Wolf, Current composed A Young Person's Guide to New Music for Symphony Orchestra in 2006-8. Premiered in Toronto by the Esprit Orchestra under Alex Pauk (who had commissioned the work) and Current narrating (2010), it was performed by the Edmonton Symphony Orchestra, the Orchestre Symphonique de Montréal and the National Taiwan Symphony Orchestra (in English, French and Mandarin respectively) in 2012.

In 2006- 2007, he was visiting professor of composition at the University of Toronto and beginning in 2006, has been artistic director of the Royal Conservatory of Music (RCM) Glenn Gould School's New Music Ensemble.

In October 2009, to celebrate the opening of Koerner Hall, Current supervised a 12-hour, 200-person installation-performance of James Tenney's In a Large Open Space for Nuit Blanche, which drew an estimated crowd of 15,000. A year later, he developed a concert series devoted to young composers that was aired on the Canadian Broadcasting Corporation Radio 2. His Airline Icarus was performed at the RCM in 2012.

Current has been an advocate for the Canadian League of Composers. He has served on the boards of the Toronto Arts Council, and the New Music Concerts repertoire committee.