The area now known as British Columbia was populated after the last Ice Age. Evidence of human habitation dates back at least 14,000 years. On the coast, several First Nations emerged. These include the Tagish, Tsimshian, Haida, Tlingit, Kwakwaka’wakw (Kwakiutl) and Nuu-chah-nulth (Nootka). Meanwhile, the Dakelh (Carrier), Interior Salish and Ktunaxa (Kootenay) were among those nations living inland.

Europeans didn’t arrive on the Pacific Coast in significant numbers until after the voyage of James Cook in 1778 and the mapping expedition of George Vancouver in the 1790s. By 1849, the land was home to about 50,000 Indigenous people and a few hundred British settlers. The settlers established the colony of Vancouver Island that year.

A form of representative government was established in BC in 1864. At the same time, the British North American colonies were debating Confederation. (See also: Charlottetown Conference; Quebec Conference, 1864.) In 1866, the colonies of Vancouver Island and BC were united under one legislative assembly and governor. The capital was placed in Victoria.


When the Dominion of Canada was created in 1867, British Columbians debated joining the new country. Entering Confederation would help BC take on debt to pay for the building of roads and other infrastructure. It would also provide a measure of security and ensure the continuation of the British nature of the colony. This was believed to be especially important following the US purchase of Alaska that same year. The Alaska purchase sparked fears that the United States would try to annex BC to link Alaska with American territories in the Pacific Northwest.

Amid these debates, Indigenous people had little or no say in their political future. Joseph Trutch, the chief commissioner of lands and works, refused to negotiate treaties with First Nations or to recognize Aboriginal title to land. (See Indigenous Territory.) He also cut the size of existing Indigenous reserves. As a result, British Columbia is the only province in Canada to exist on unceded land. (See also Aboriginal Title.)

Politician Amor De Cosmos, a newspaper publisher, led the movement for BC to join Confederation. He was joined by John Robson and Arthur Kennedy. De Cosmos formed the Confederation League in May 1868 to unite the colony with Canada and bring responsible government to BC. The league grew in popularity. Over the course of the summer, branches were established in New Westminster, Hope, Yale and Lytton.

On 14 September 1868, a meeting of 26 Confederation League delegates from across the colony was held in Yale. The delegates passed 37 resolutions. Nearly all of them outlined the possible terms for a union with the Dominion of Canada. Delegates agreed that Canada should pay down the colony’s debt, that the province should have a responsible government, and that a wagon road should be built to link British Columbia to the east. Delegates also wanted assurances that the province would have control over immigration, First Nations affairs, land grants, education and settlement policy. 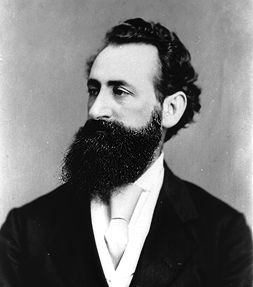 Born Bill Smith, he changed his name to Amor de Cosmos, which, he said, "tells what I love most. order beauty the world the universe".

However, the Confederation League’s greatest opponents were the powerful, unelected members of BC’s colonial government. They feared for their jobs and pensions if BC became a Canadian province with a fully elected, rather than a partially appointed, legislature. As a result, when the League’s proposals were brought before the legislative council, they were defeated. Economic recession in the colony, as well as the presence of a group of settlers who favoured the annexation of BC by the United States, also hampered the Confederationists.

One major obstacle to union was removed in 1869 with the death of Governor Frederick Seymour. He had opposed joining Canada. His replacement, Anthony Musgrave, supported union. The following year, Canada also purchased Rupert’s Land and the North-West Territories from the Hudson’s Bay Company. This gave Canada control over the vast territory between the Great Lakes and BC. It cleared the way for a coast-to-coast country and, eventually, a transcontinental railway. 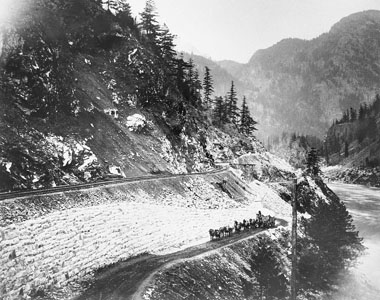 BC Becomes a Province

The colony’s legislature debated Confederation in the spring of 1870. It decided, despite opposition, to seek entry into Canada without responsible government. The colony then sent a three-man delegation to Ottawa to negotiate the terms of entry.

Federal leaders insisted on BC having responsible government if it became a province. They agreed to provide pensions for unelected local officials who would lose their positions in the process. Canada also agreed to take on BC’s debt, build a rail link to the Pacific Coast, and give BC the right to send three senators and six members of Parliament to Ottawa.

The terms were passed by both the BC assembly and the federal Parliament in 1871. The colony joined Canada as the country’s sixth province on 20 July 1871. Construction of the Canadian Pacific Railway, a central condition of the deal, was finally started in 1878 after many delays. It was finished in 1885. (See also The Last Spike.)