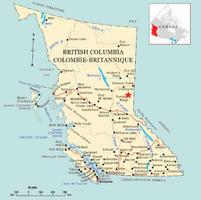 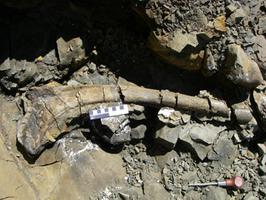 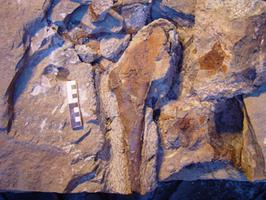 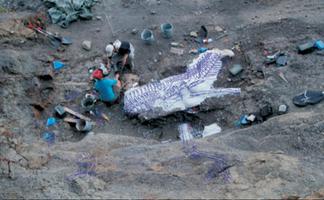 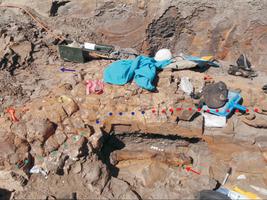 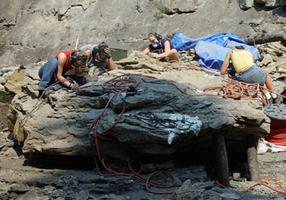 Main body of the hadrosaur. Green dots are located at the tips of the neural spines of the caudal (tail) series of vertebrae; blue dots are over the sacral (hip) spines; red dots are over the thoracic (abdomen) spines; blue arrow is on the left ischium (hip bone); red arrow is pointing at a disarticulated left ulna (forelimb bone) (photo courtesy Richard McCrea)
Field crew working at British Columbia's first dinosaur excavation (courtesy Richard McCrea)\r\n
PreviousNext

Skeletal remains of dinosaurs are an exceedingly rare resource in British Columbia, so much so that prior to 2002 there were only two reports of single dinosaurian skeletal elements from this province. This changed in 2002 when the first reported concentration of dinosaur bones was discovered only a few kilometres from Tumbler Ridge in the Upper Cretaceous (Turonian) Kaskapau Formation. Palaeontologists from the newly formed Peace Region Palaeontology Research Centre (P.R.P.R.C.), based in Tumbler Ridge, began an excavation on this site in the summer of 2003, which continued to 2005. Over 200 isolated skeletal elements were found and removed, and the bones were from a number of dinosaurs (theropods, ankylosaurs & hadrosaurs) and other vertebrates (turtles, crocodiles, fishes and fresh-water rays). Although this was the first dinosaur site from British Columbia and one of the oldest in western Canada (~97 million years old) the specimens were not articulated or complete.

In the summer of 2007 P.R.P.R.C. palaeontologists discovered a second concentration of dinosaur bones along 10 metres of exposed outcrop not far from the town of Tumbler Ridge. Over 100 kg of bones were surface collected and some of the elements were diagnostic enough to identify the remains of one or more hadrosaurian (duck-billed) dinosaurs. The bones were preserved in fine-grained sediments deposited in a very low-energy environment, similar to a fresh-water swamp or bog with standing trees.

The dinosaur bones were found within the Upper Cretaceous (Campanian-Maastrichtian) Wapiti Formation whose sediments were deposited approximately 75 million years ago. The Wapiti Formation is exposed extensively in western Alberta as far east as Edmonton, but only extends a short way into British Columbia, with its northern and western boundary close to Tumbler Ridge but pinching back to the southeast to the provincial border.

The excavation of the hadrosaur site began in 2008 and a number of disarticulated bones (ribs, vertebrae and a femur) were uncovered, mapped and removed to the nearby P.R.P.R.C. At this point the palaeontologists did not know if they were dealing with the remains of one hadrosaur or several.

It wasn't until the 2009 excavation that palaeontologists found they were dealing with one partially articulated dinosaur when they discovered the complete proximal half of the tail connected to an intact sacrum. The hadrosaur's body was lying on its right side and many of the isolated elements that were discovered around the body (ribs, radius, and femur) were from the exposed left side of the hadrosaur. Associated with the hadrosaur remains were a remarkably high number of shed juvenile tyrannosaur teeth, the source of which was from several individuals.

The most recent 2010 excavation uncovered the hadrosaur's vertebral column complete up to the shoulders, but with all the left limb and rib elements missing. The anterior thoracic vertebrae, the cervicals (neck vertebrae) and the skull were not found in articulation, though many isolated thoracic and some cervical vertebrae were found near the front of the animal. All of the bones of the hips were complete and in proper articulation, and at least a portion of the right leg was intact. Based on the morphology of the hip bones it is likely that this animal was a lambeosaurine (crested) hadrosaur rather than a hadrosaurine (non-crested) hadrosaur. Forty juvenile tyrannosaur teeth were recovered from this site, and this number is expected to approach 80-100 by the completion of the project.

The low-energy depositional environment this site is preserved in makes it unlikely that water currents could have been responsible for the disarticulation and transport of the bones, or the deposition of the several tyrannosaur teeth. Large bones (ribs, femur and sections of vertebrae) were found a few to several metres from the carcass, while very small bones from the extremities (ie, manual and pedal unguals) were found close to the carcass. If current had been the dominant factor in the disarticulation of this hadrosaur it would be expected that the small bones would have been transported far from the carcass and the larger bones been transported only a short distance from the carcass. The presence of an unusually large number of juvenile tyrannosaur teeth suggests that tyrannosaurs scavenged the hadrosaur carcass either in one group of many individuals, or serially. It is unknown if a predator or group of predators was responsible for this hadrosaur's death, but this and many other questions will hopefully be answered once the excavation is complete and all of the bones are prepared. 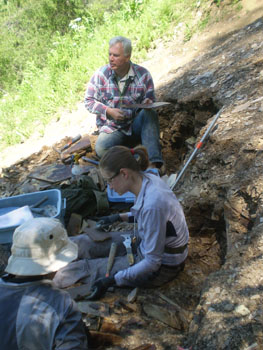