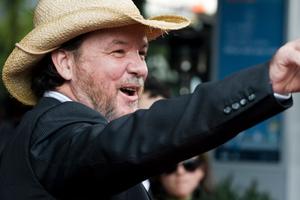 Bruce Cameron McDonald, film editor, film director (b at Kingston, Ont 28 May 1959). After studying filmmaking at Ryerson Polytechnic Institute (now University) in Toronto, Bruce McDonald spent several years struggling to survive as a member of the Toronto independent film community. He was one of the founders of the Liaison of Independent Filmmakers of Toronto (LIFT) and edited the special "Outlaw Edition" of Cinema Canada published in October 1988. He had already directed several short films, including Let Me See (1982), which won the Norman Jewison award for best Canadian student film, and Knock! Knock! (1985). His first job in the film industry was as production assistant on Ron Mann's Poetry in Motion (1982), and he worked as an editor on Mann's Comic Book Confidential (1988), as well as Atom EGOYAN's Family Viewing (1987) and Speaking Parts (1989). In 1988 McDonald and Colin Brunton won a Genie as producers of the Best Live Action Short, the mock-documentary The Mysterious Moon Men of Canada, directed by Brunton.

Bruce McDonald established himself as a director with two offbeat road films, both scripted by Don MCKELLAR. In the director's own words, Roadkill (1989) is a "rock and roll film about a girl who learns how to drive." Valerie Buhagiar stars as the woman who experiences many strange encounters as she searches Northern Ontario for a missing rock band. Buhagiar also stars in Highway 61 (1991) as a mysterious woman who entices a timid barber (McKellar) to travel with her and a coffin down the famous highway from Thunder Bay to New Orleans. Both films were well received and won several awards.

Bruce McDonald's third feature film, Dance Me Outside (1994), for which he wrote the screenplay based on a story by W.P. KINSELLA, was made on a larger budget and produced by Norman JEWISON. It depicts life on a reservation and, made in a more conventional style than his earlier films, it received a mixed critical reception. The film led to a successful CBC television series, The Rez (1996), produced by McDonald's production company, Shadow Shows.

Bruce McDonald returned to the road and to rock music with Hard Core Logo (1996), a mock-documentary about the travels of a fictional band. He also directed numerous music videos for groups such as The Pursuit of Happiness, Headstones, Acid Test and Vern Cheechoo. In 1998 he directed Twitch City, a 6-part CBC television series written by Don McKellar, and Elimination Dance, a short film based on a poem by Michael ONDAATJE and scripted by McKellar. He has continued to work in television, directing episodes of Lonesome Dove, Queer as Folk, ReGenesis and This Is Wonderland. He has also re-emerged as one of Canada's most important film directors. His thriller Picture Claire (2001) was not well received, but he further developed its split-screen techniques in The Love Crimes of Gillian Guess (2004), a television film made for CITY-TV, and in The Tracey Fragments (2007), with Ellen PAGE. In the latter film, the multiple screens powerfully express the fragmented consciousness of the troubled protagonist.

Pontypool (2008) is a horror film that confines the action to a radio station where a talk-show host (played by Stephen McHattie) responds to news of a virus that is turning people into zombies in the small Ontario community outside. This Movie is Broken (2010), a romantic drama filmed on location in Toronto and centred on a concert by the band Broken Social Scene, was another collaboration with Don McKellar. Trigger (2010), which premiered at the Toronto International Film Festival, stars Canadian actors Tracy Wright and Molly PARKER as former bandmates who meet again in later life.