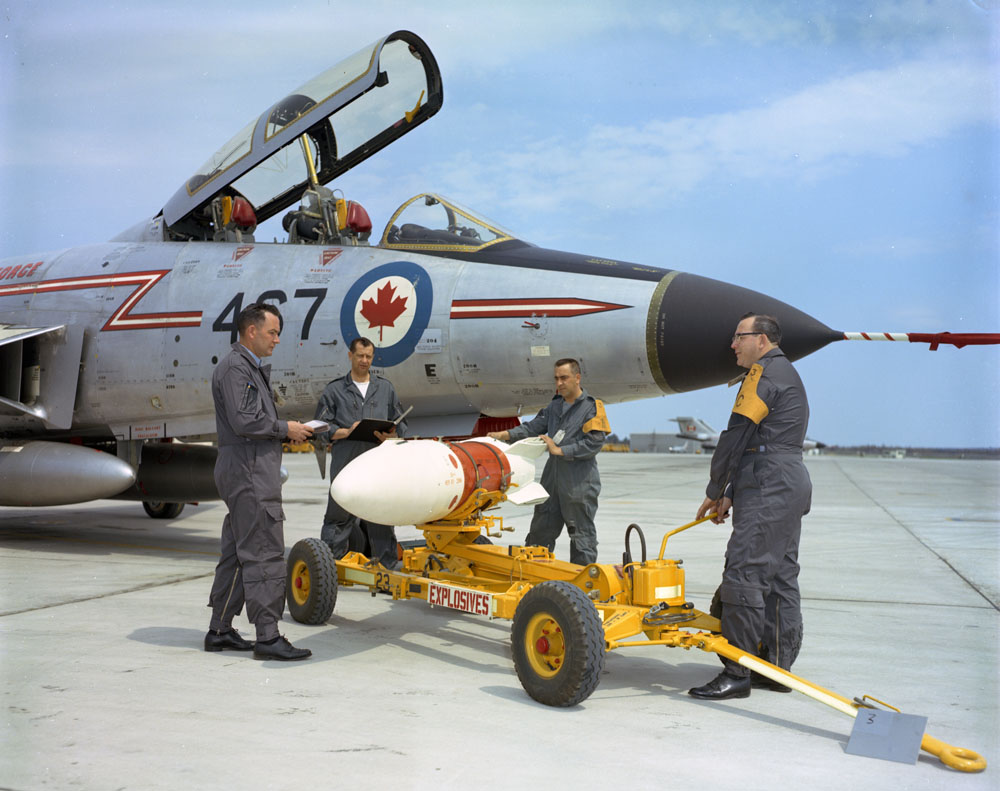 At the beginning of the Second World War, the United Kingdom had the world’s most developed nuclear weapons program. Because of the threat of a Nazi invasion and the bombing of Britain, the British nuclear program was transferred to Canada in 1942. Canada was already an important leader in the study of nuclear physics. (See Nuclear Fusion.)

At the Quebec Conference of August 1943, the British-Canadian nuclear research program merged with its American counterpart, the Manhattan Project. Canada’s contribution included supplying and processing uranium as well as researching the production of plutonium. Canada also provided scientists in addition to research and production facilities. (See Canada and the Manhattan Project.)

Canada’s involvement in the Manhattan Project led to the development of its nuclear energy industry. Canadian nuclear reactors have since been designed so that they cannot be used to make nuclear weapons.

The first nuclear weapons deployed in Canada were between 11 and 15 Mark IV atomic bombs. These bombs were upgraded versions of the Fat Man bomb used to destroy Nagasaki in 1945. These bombs were deployed along with 43 American long-range bombers in the summer of 1950 to Goose Air Base in Labrador. (See Happy Valley-Goose Bay; Canadian Forces Base.) The deployment of these weapons was kept secret from the Canadian public.

Two “Broken Arrow” incidents occurred over Canadian territory in 1950. Both involved Mark IV bombs. Broken Arrow is a US military term that refers to an accident involving a nuclear weapon. On 13 February 1950, an American B-36 bomber on a flight from Alaska to Texas experienced engine failures. This forced the aircraft to jettison its bomb near Princess Royal Island, British Columbia. The bomb self-destructed in a conventional (non-nuclear) explosion. The crew bailed out and most survived. The plane, however, crashed into Mount Kologet. (See also Rocky Mountains.)

DID YOU KNOW?
Atomic weapons policy at the time was that the plutonium core of these bombs was kept at a separate location to avoid an accidental nuclear detonation.


On 10 November 1950, a B-50 Superfortress bomber experienced severe engine malfunctions. The crew dropped its Mk. IV bomb over the St. Lawrence River near Rivière-du-Loup. The bomb self-destructed over the water. The explosion spread about 45 kg of uranium into the air. Both of these Broken Arrow incidents were covered up. They only became more widely known after the Cold War.

Nuclear weapons caused a lot of controversy in Canada. In the early years of the Cold War, a nuclear war between the United States and the Soviet Union would likely have taken place over Canadian territory. This encouraged anti-nuclear activists and led to the creation of Canadian Voice of Women for Peace. Despite this, Canada remained a close ally of the United States — the world’s first nuclear power. Both nations had co-operated in the defence of North America since the Second World War.

In the early Cold War, the main threat came from Soviet bombers armed with nuclear bombs. To defend against these, the Royal Canadian Air Force (RCAF) equipped itself with high-performance fighter jets. These included the Canadian-built CF-100 Canuck interceptor, and later, the planned CF-105 Arrow. Canada and the United States also collaborated on the construction of several lines of early warning radar stations. These stretched across the country and one — the DEW Line — was built in the High Arctic. (See Arctic Circle.) They could detect Soviet bomber formations before they entered North American airspace. Radar would form the backbone of Canada’s contribution to NORAD throughout the Cold War.

By the 1960s, intercontinental ballistic missiles (ICBMs) began replacing bombers in delivering nuclear weapons. It was widely believed that ICBMs had made bombers and interceptors obsolete. These new threats led to the cancellation of the Avro Arrow.

NORAD, a joint Canada-United States aerospace defence command, first came online in 1957 and became official in 1958. Canada acquired Bomarc missiles as part of the continental defence strategy. The Bomarc was a first-generation surface-to-air missile that was guided to its target by ground-based radars. The Bomarcs had a range of about 700 km and were effective against targets even if they exploded up to 1 km away. Their nuclear warheads had an explosive yield of 10 kilotons (two-thirds of the strength of the weapon that destroyed Hiroshima).

In total, 56 Bomarc missiles were deployed to Canada, and were operated from 1960 to 1972. The use of nuclear warheads for the Bomarcs was highly controversial and caused a political crisis in Canada in the early 1960s. (See Bomarc Missile Crisis.)

Prime Minister John Diefenbaker had contradictory positions on nuclear weapons. He publicly opposed the use of nuclear weapons. However, his government also began the nuclear weapons acquisition process. It purchased rockets and missiles while the issue of nuclear warheads was being debated by the Canadian public. Diefenbaker was also displeased that the Canadian Forces went to high alert during the Cuban Missile Crisis of 1962 — a decision essentially made by the American military. Diefenbaker was concerned that Canada was being dragged into a nuclear conflict against its will. These two crises strained diplomatic relations with the United States and made Diefenbaker seem weak on defence issues in Canada. (See Canada and the United States.) His successor, Lester B. Pearson, committed Canada to accepting nuclear warheads to defend Canada.

The cancellation of the Avro Arrow in 1959 meant Canada didn’t have a new fighter jet for continental defence. Instead, the Diefenbaker government purchased 66 CF-101 Voodoos interceptors. The Voodoo was designed to carry the Genie rocket, which was fitted with a nuclear warhead. Canada was initially supposed to purchase 330 Genie rockets with nuclear warheads. The exact number of nuclear weapons present in Canada is a matter of debate, however. Like the Bomarc, the Genies didn’t have to hit a target directly. They could knock targets out of the sky with their blast and shock wave. The Genie had a range of 10 km and a blast radius of 300 m. They had an explosive yield of 1.5–2 kilotons (roughly 10 per cent the explosive force of the Hiroshima bomb). The Genies were operated from 1965 to 1984.

Throughout the Cold War, Canada had a large permanent military force in Western Europe. This included significant army and air force deployments in France and West Germany. Canada deployed nuclear weapons as part of its NATO contribution to the defence of Western Europe.

The only nuclear weapon operated by the Canadian Army was the Honest John short-range nuclear artillery rocket. Canada had access to 16 W31 variable-yield warheads set to the 2-kiloton explosive yield. Four complete Honest John systems were deployed in West Germany, while two systems remained in Canada for training. The nuclear warheads were only deployed in Germany. The Honest John had a range up to 50 km. Canada operated the system from 1964 to 1970.

Canada’s most destructive and numerous nuclear weapons were carried by the RCAF’s CF-104 Starfighter. Between 1964 and 1972, Starfighters had access to different types of nuclear bombs with a variety of explosive yields. These ranged from 5 kilotons (around 33 per cent of one Hiroshima bomb) up to possibly 1.45 megatons (almost 100 times more powerful than the Hiroshima bomb). The best estimate is that Canadian Forces in Europe had access to between 90 and 210 nuclear bombs during this period. Information regarding these weapons remains limited.

Canada’s operation of nuclear weapons was controversial throughout the Cold War, and the topic remained a closely guarded national secret. Officials never confirmed nor denied the presence of nuclear weapons on Canadian military bases. Canada is generally considered to be the first nation to have voluntarily given up its nuclear weapons. Systems were deactivated beginning in 1968 and continuing until 1984. (See Disarmament.) Canada maintains the technological capability to develop nuclear weapons. Canada also remains protected by the American nuclear umbrella and the nuclear weapons of its NATO allies.