The Cuban Missile Crisis took place at the height of the Cold War. On 14 October 1962, an American spy plane took photographs of Soviet medium- and intermediate-range ballistic missiles being installed in Cuba. Equipped with nuclear warheads, the missiles could hit targets in the United States and Canada.

US President John F. Kennedy was informed of the situation on 16 October. He and his advisors spent a week secretly discussing what to do. Kennedy rejected calls from his military to launch air strikes against the missile sites. Instead, he mounted an immediate naval blockade of Cuba. Kennedy called it a “quarantine,” since in international legal terms a naval blockade was an act of war that required a formal declaration of war. He announced the crisis, and the blockade, in a televised address to the American public on 22 October. He threatened the Soviet Union with further action if the missile sites were not dismantled.

Like other NATO leaders, Prime Minister John Diefenbaker was informed by Kennedy of the US plan shortly before the televised broadcast. The two leaders did not get along well at the best of times. On the phone with Kennedy, Diefenbaker was skeptical about the Soviet Union’s intentions. He asked to see further proof of what was taking place on the ground in Cuba. Diefenbaker urged Kennedy to send a team of United Nations inspectors to Cuba to verify what the Soviets were doing there.

The main issue for the Canadian government was whether to comply with an American request to move Canadian forces to a higher alert status equivalent to their DEFCON 3. Diefenbaker, who disliked Kennedy, was reluctant. He was angry that the US hadn’t consulted Canada earlier in the crisis. He and Canada’s Foreign Minister, Secretary of State for External Affairs Howard Green, were also wary of falling too quickly into line with American demands. They were also concerned that placing Canada’s military on alert might provoke the Soviet Union.

Defence Readiness Condition, or DEFCON, refers to any one of five levels of American defence readiness and is based on the apparent threat to national security. DEFCON 5 is normal, while DEFCON 1 indicates nuclear war is imminent. DEFCON 3 means an increase in readiness above normal levels, specifically that air forces are ready to deploy in 15 minutes. Canada also had a five-stage national alert system: Discrete Phase, Ready State, Simple Alert, Reinforced Alert and General Alert.

Despite these concerns and delays, National Defence Minister Douglas Harkness asked Canadian units to raise their alert level to the Ready State, the equivalent of DEFCON 3. However, formal permission was delayed while Cabinet debated the matter for the next two days. Harkness argued that the nature of the crisis, combined with international treaties, made the alert necessary (Canada was a member, along with the US, of both NATO and NORAD).

About half of Canada’s ministers remained undecided on the issue. But as Soviet ships approached the quarantine zone later in the week, other NATO members announced their support for the blockade. Harkness’s position gained support. On 24 October, the Diefenbaker government authorized the Ready State of Military Vigilance. Canadian ships and aircraft also participated in patrols to locate Soviet submarines in the North Atlantic. 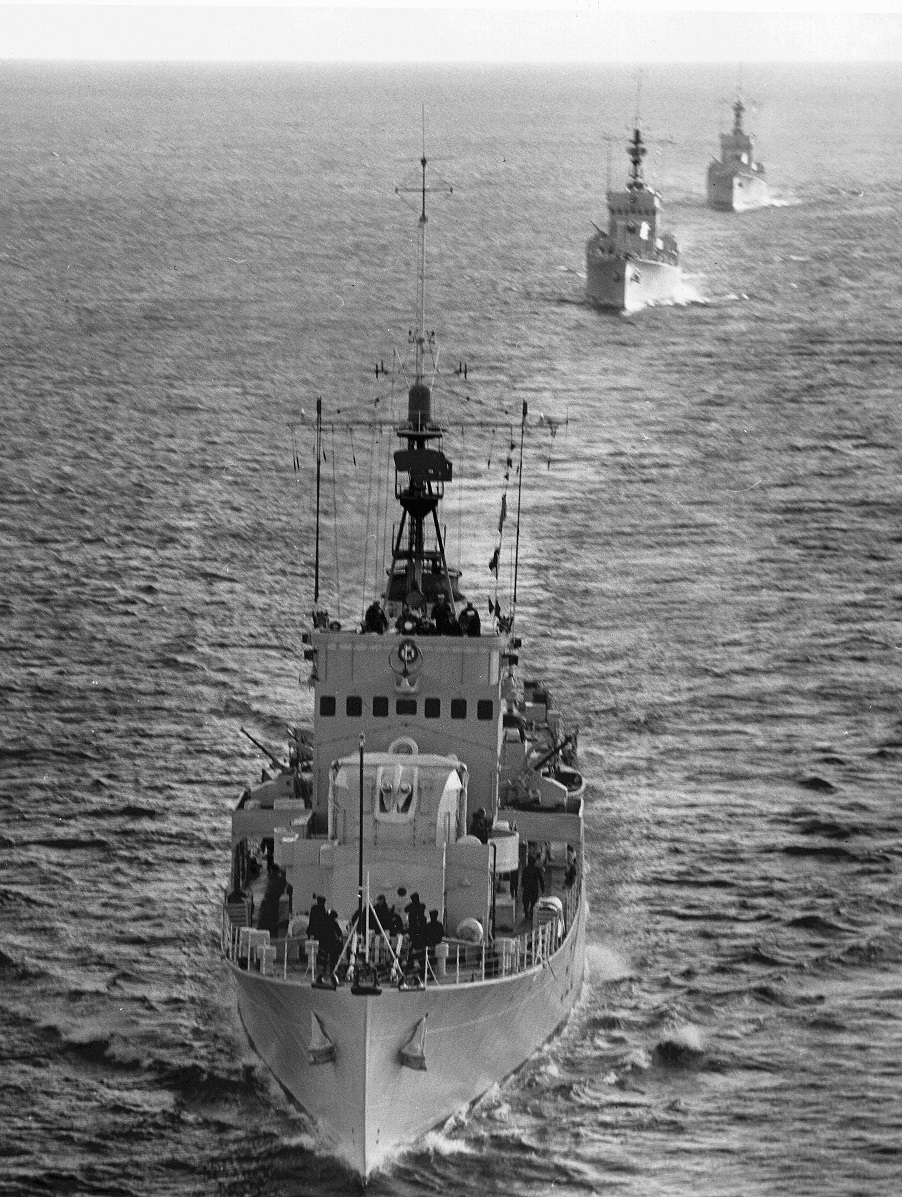 In fact, ships and aircraft of the Royal Canadian Navy and aircraft of the Royal Canadian Air Force had been active in antisubmarine operations in the North Atlantic in cooperation with US forces since early October. This was due to a noted increase in Soviet submarine activity in the area. Naval and air force commanders carried out these ASW actions under the authority of long-standing Canada-US bilateral defence agreements. After Kennedy’s public address on 22 October, additional Canadian ships were fuelled and provisioned; they sailed on 25 October, once formal authority was received from the Canadian government for the Ready State.

Canada’s hesitant response reflected the government’s desire to preserve the independence of its foreign policy. It also wanted to maintain a balanced posture in crisis conditions. The delay, however, was widely criticized in Canada. It led to a growing perception that the Diefenbaker government was indecisive.

Canada’s hesitancy worsened already tense relations with the Kennedy administration. It also fuelled controversy and confusion in Canada over the country’s policy on nuclear weapons. This had first surfaced in the 1960 debate on Bomarc missiles.

The Cuban Missile Crisis lasted for 13 tense days. The world’s two atomic superpowers came closer than ever to nuclear war. The stand-off ended on 28 October with the help of United Nations diplomats, in particular Secretary General U Thant. Thant offered suggestions to resolve the crisis and continuously relayed messages between the two superpowers. As Kennedy acknowledged later, “U Thant has put the world deeply in his debt.” Soviet Premier Nikita Khrushchev agreed to dismantle and remove the Soviet missiles, in return for Kennedy’s promise not to invade Cuba. Although the crisis had been defused, the US military remained on heightened alert for three more weeks as it monitored the removal of the missiles. As part of the resolution, Kennedy also secretly promised to remove US intermediate-range Jupiter nuclear missiles from Turkey, which had been a Soviet demand. This agreement did not become public knowledge until the late 1980s.

Diefenbaker had won the 1958 election with the biggest landslide in Canadian history. But his hesitant response to the Cuban missile crisis led to the downfall of his regime. In the wake of the crisis, the US accused the Diefenbaker government of lying and avoiding its military duties. Harkness resigned as minister of defence. Diefenbaker’s Progressive Conservatives lost to Lester B. Pearson and the Liberal Party in the election on 5 February 1963.