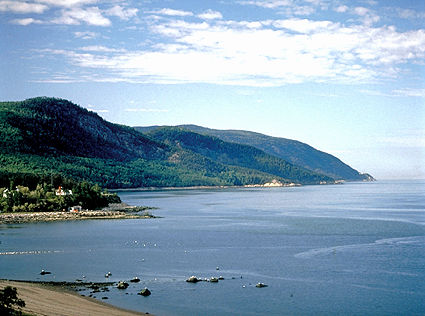 The St. Lawrence forms much of the southwestern outline of the Canadian Shield, which encroaches the river at Quebec City. At Cap-Tourmente, 40 km below Quebec, the Laurentians rise 579 m above the river and follow its course past Les Eboulements (770 m). Here they begin to retreat inland, to the Saguenay. The south bank is generally lower, although the Appalachians approach the river at Matane and, continuing eastward, form the tableland of Gaspé.

The westerly limit of the St. Lawrence River itself has been set at Everett Point, Lake Ontario. The section from Kingston to Montreal is called the International Rapids, as sudden drops in the riverbed create a series of rapids (this portion was flooded in the 1960s, forming Lake St. Lawrence). The river begins as an extended arm of Lake Ontario, choked with numerous islands, beginning with Wolfe Island and including the Thousand Islands near Gananoque, Ontario. It trends northeast past Brockville, Prescott and Morrisburg to Cornwall, where it broadens to form Lake St Francis.

The Beauharnois Canal now carries shipping safely past the former rapids of Lachine and Les Cèdres to another widening of the river, Lac St-Louis, southwest of Montreal. The Ottawa River joins the mainstream through channels to Lac St-Louis and over a northeast route via Lac des Deux Montagnes, Rivière des Mille-Iles and Rivière des Prairies.

The land between the various channels at the confluence forms the archipelago on which the city of Montreal is built. The port of Montreal has been developed since the 19th century by dredging and canals.

From Montreal to Trois-Rivières, the St. Lawrence River is generally calm and unaffected by tides. A number of long, narrow islands continue to divide the mainstream and a large cluster, similar to the group at Lake Ontario, lies at the mouth of the Richelieu River at Sorel. The river broadens into Lac St-Pierre, some 15 km wide, and narrows again at Trois-Rivières, at the mouth of the St-Maurice River. From here to Quebec, the freshwater flow becomes reversible with the tides. 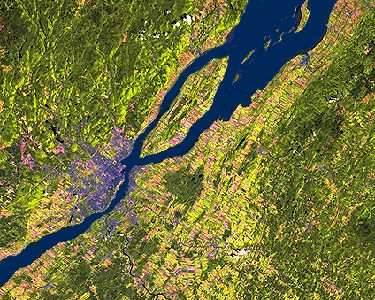 The river constricts at Quebec where a promontory commands the entire upper course. The military value of the site was appreciated long before European settlement began.

Past Quebec the river divides to encircle Ile d'Orléans and steadily widens to 15 km at Cap-Tourmente, almost 25 km at Île-aux-Coudres. The water becomes brackish and tides are high. Near the mouth of the Saguenay River, the riverbed drops dramatically from 25 m to 350 m, forming a drowned valley in the lower estuary. The freshwater flow mingles with cold arctic saltwater. The town of Tadoussac sits on a terrace of sand and clay at the confluence, but the rugged Precambrian north shore is sparsely settled.

The south shore of the estuary, which forms a great curve towards Gaspé, is more open towards its hinterland, and major roads, including the Trans-Canada Highway, head inland from Rivière-du-Loup, Trois-Pistoles, Rimouski and Matane.

At Pointe-des-Monts, about 70 km east of Baie-Comeau and the mouth of the Manicouagan River, the north shore turns dramatically north-northeast for about 100 km to Sept-Îles, near the mouth of the Moisie River. The river doubles in width to over 100 km, forming a deep, broad submarine valley, in which strong currents pour in from the gulf along the north shore and sweep counterclockwise back to the east. The saline water of the estuary discourages ice, and the port of Sept-Iles is open year-round, despite its northerly location.

According to the Royal Proclamation of 1763, a line from the mouth of Rivière St-Jean on the north shore past the western tip of Île d'Anticosti to Cap des Rosiers on Gaspé marks the end of the river and the beginning of the gulf.

Over the course of the river, the vegetation varies from deciduous, mixed and coniferous forest to taiga. There are sandbank grasses in the freshwater course, and seaweed and other saltwater plants in the middle and maritime estuary. Fish include smelt, sturgeon and herring. Beluga whales inhabit the lower course, on which walrus was once also abundant. Massive flocks of migratory birds use the sandbanks or river reefs as seasonal stops, including most of the world's greater snow geese, which nest on the tidal marshes at Cap-Tourmente.

Sedentary Indigenous groups — likely Iroquoian — were settled at the present sites of Quebec (Stadacona) and Montreal (Hochelaga) at the time of Jacques Cartier's first explorations in the area in 1535. They had disappeared by the time Champlain founded Quebec in 1608, possibly dispersed by the nomadic Innu, Etchemin and Algonquin, with whom the French established a lucrative trading alliance.

With the help of Indigenous guides, Jacques Cartier travelled the St. Lawrence River in 1535. The guides took him past Anticosti, which he had believed was a peninsula. He built two transient camps near Stadacona in 1535 and 1541, but it was not until 1608 that the French foothold was secure.

The St. Lawrence River provides almost the only riverine entrance to the heart of the continent, and French explorers and traders used it to establish a colonial empire that stretched beyond Lake Superior. By 1760 most of the riverbank from Quebec to Montreal was patterned with the long, narrow strips of the seigneurial system, with the seigneury of Beaupré marking the eastern limit of settlement.

The river system was suited to the carriage of buoyant softwood logs, and in the 19th century it became the main artery of the timber trade. Montreal and Quebec City grew into major commercial centres, as wheat and flour from Upper Canada were carried down the river. Under the leadership of the North West Company, the fur traders pushed the "Empire of the St Lawrence" all the way to the basin of the Mackenzie River.

Donald Creighton and others have argued that the east-west axis of the St. Lawrence, which provided a counterpoise to the north-south affinity offered by much of the continent's geography, helped make the future nation of Canada possible. Today, with the development of the St. Lawrence Seaway, the river links a vast area of Canada and the US with the rest of the world. It is still, as Cartier called it, "the great river of Canada." 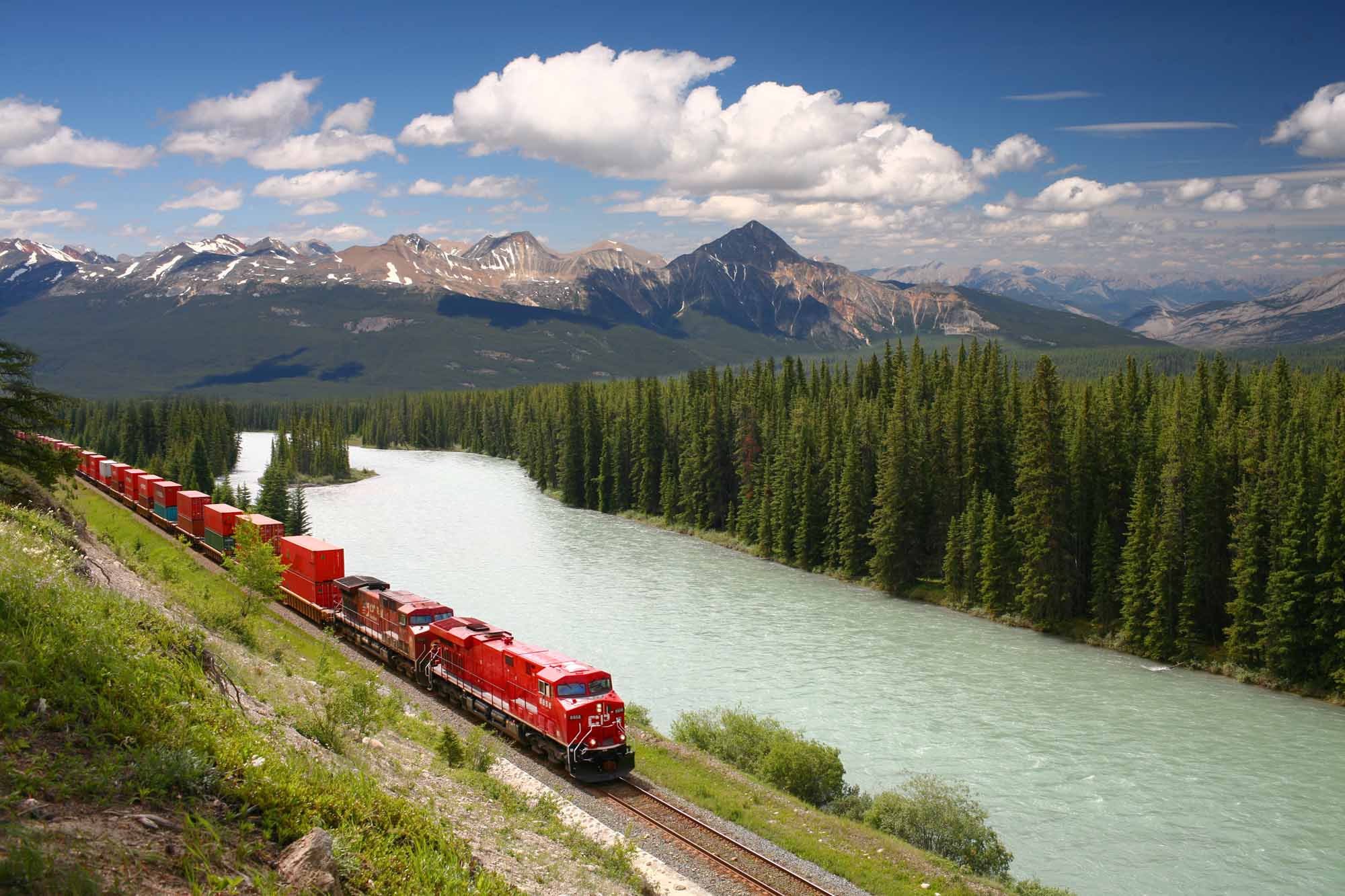