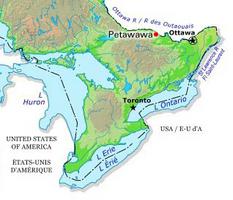 Occupying 30 770 ha along the Ottawa and Petawawa rivers, 166 km northwest of Ottawa, Canadian Forces Base (CFB) Petawawa was officially opened in 1905 as an eastern Ontario summer-training militia camp. Built astride historic fur-trading routes, it had roles in both world wars as a major military staging and training base, especially for the artillery and engineers, and as an INTERNMENT centre. During the GREAT DEPRESSION there were relief camps here. After 1945 it became a permanent regular military-unit establishment. Designated "Camp Petawawa" in 1951, it underwent substantial military expansion and urban growth.

Renamed Canadian Forces Base Petawawa in 1968, the base has a total population of 5000. As one of Canada's busiest operational bases, it is economically important to the adjacent town of PETAWAWA and nearby PEMBROKE. At present it is the home of the military unit 2 Canadian Mechanized Brigade Group as well as 2 Area Support Group and Canadian Special Operations Regiment. CFB Petawawa is a major centre for combat troops of the Canadian Army and its soldiers participate in combat and peacekeeping missions around the world and are available for emergency response missions in Canada.