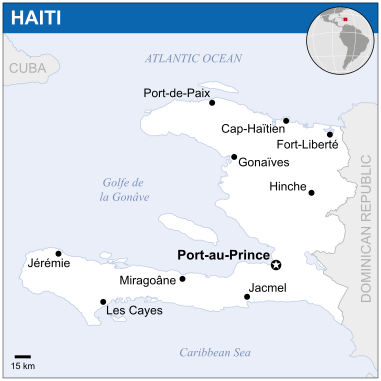 (courtesy UN Office for the Coordination of Humanitarian Affairs/Wikimedia CC)

Haiti is a Caribbean nation east of Cuba. It occupies the western third of the island of Hispaniola, which it shares with the Dominican Republic. More than 10 million people live in Haiti. Most are the descendants of African slaves who had revolted against their French colonial masters and gained their independence in 1804. For much of its history, Haiti has been wracked by internal strife, ranging from economic, political and social problems to devastating natural disasters. It is the poorest country in the Western Hemisphere.

After several years of unrest in the first half of the 20th century, François Duvalier (known as “Papa Doc”) was elected president in 1957. He quickly established a police state and had himself elected as president for life. Under Duvalier’s corrupt regime, Haiti became isolated internationally and suffered economically. Corruption and human rights abuses were rampant. 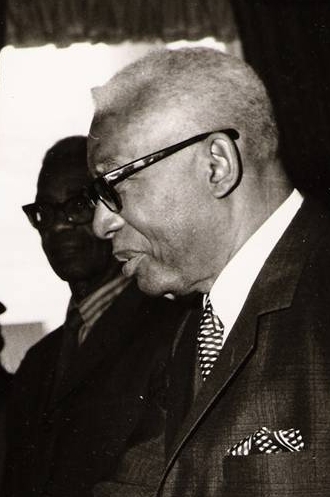 He was succeeded by his son, Jean-Claude (nicknamed “Baby Doc”), who lived lavishly while the people of Haiti experienced poor living conditions and high unemployment. The combination of poverty, corruption, intimidation and a lack of political freedom led to nationwide rioting against the regime. Duvalier fled to France in 1986.

After years of instability, populist reformer Jean-Bertrand Aristide was elected president. Aristide won 67 percent of the vote in the country’s first free elections (November 1990 to February 1991). The elections were monitored by the United Nations Observer Group for the Verification of the Elections in Haiti (ONUVEH). The CAF contributed 11 of the 65 personnel who supervised elections and provided security.

Aristide was overthrown in a military coup d’état in September 1991, largely because his reform policies upset the business and military elite. This was followed by extreme violence and human rights abuses, much of it against Aristide’s supporters.

The UN responded to the military coup by imposing economic sanctions. However, this worsened the country’s already disastrous financial situation. Meanwhile, diplomatic efforts by the UN to resolve the crisis and restore constitutional government were unsuccessful. As a result, the UN Security Council imposed an oil and arms embargo against Haiti in June 1993. These sanctions were lifted when an international agreement was reached to resolve Haiti’s crisis.

A small advance team was quickly deployed to Haiti, but when a U.S. Navy ship arrived on 11 October 1993, carrying more military personnel, armed civilians prevented them from landing. The operation was stood down, and the UN Security Council immediately reimposed its oil and arms embargo. To ensure that the embargo was effective, a 28-nation Multinational Force (MNF) of several warships began operations on October 18.

Three Canadian warships participated in the embargo until mid-December 1993, when a series of single warships replaced them in rotation. By the time the embargo ended on 29 September 1994, Canadian sailors had made a total of 1,388 armed boardings and diverted 119 ships from making deliveries to Haiti.

In July 1994, the UN Security Council authorized the MNF to take whatever measures necessary to ensure the return of Aristide and allow UNMIH to resume its role. Lead elements of the MNF landed unopposed on September 19, and Aristide returned as president. This also cleared the way for UNMIH to return.

In March 1995, approximately 500 CAF personnel were sent to Haiti. Composed of aviation, engineering, transportation and administrative support personnel, its role was to provide logistical and construction support to UNMIH. Canada’s contribution expanded in March 1996, when the UNMIH mandate was extended for four months and most of the original force was replaced. The new 750-person contingent included infantry, engineers, helicopters and logistics personnel. UNMIH ended in June 1996. 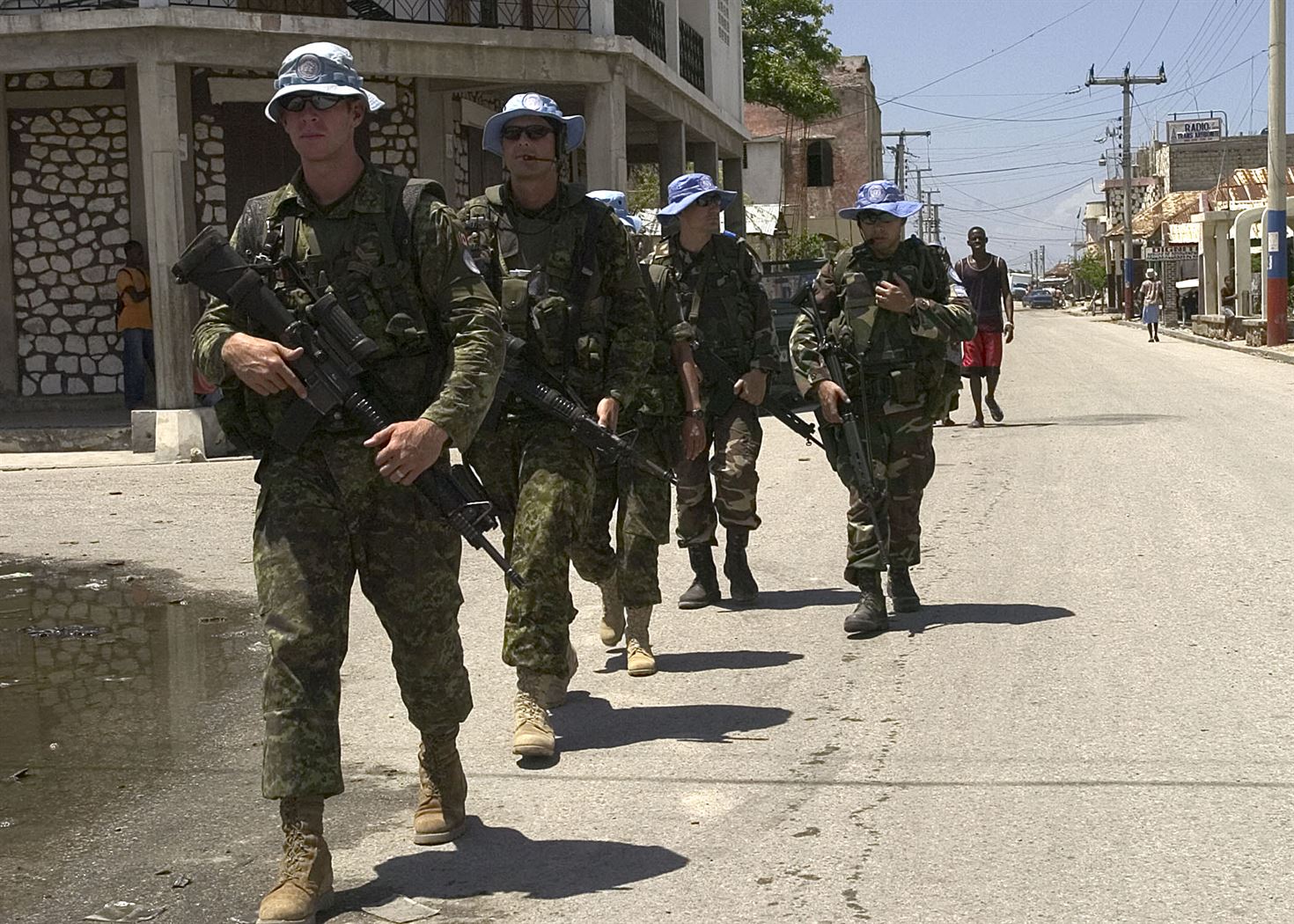 Canadian and Argentinian peacekeepers on foot patrol in Gonaives, Haiti.

In May 1996, the government of Haiti asked the UN to continue its peacekeeping role in the country to assist the Haitian National Police and provide security and stability. The UN Security Council agreed and established the UNSMIH. Its initial mandate ran until November 1996 but was later extended to July 1997. The 750-member CAF contingent included reconnaissance, engineers, helicopters and support elements. The Force Commander was Canadian Brigadier-General J.R.P. Daigle.

On 30 July 1997, UNTMIH was created to replace UNSMIH for a four-month period at the request of Aristide’s replacement, Réné Préval. Its mandate was to continue assisting the Haitian government in the professionalization of the Haitian National Police. The total strength of the force averaged about 1,200 military personnel and 230 civilian police. 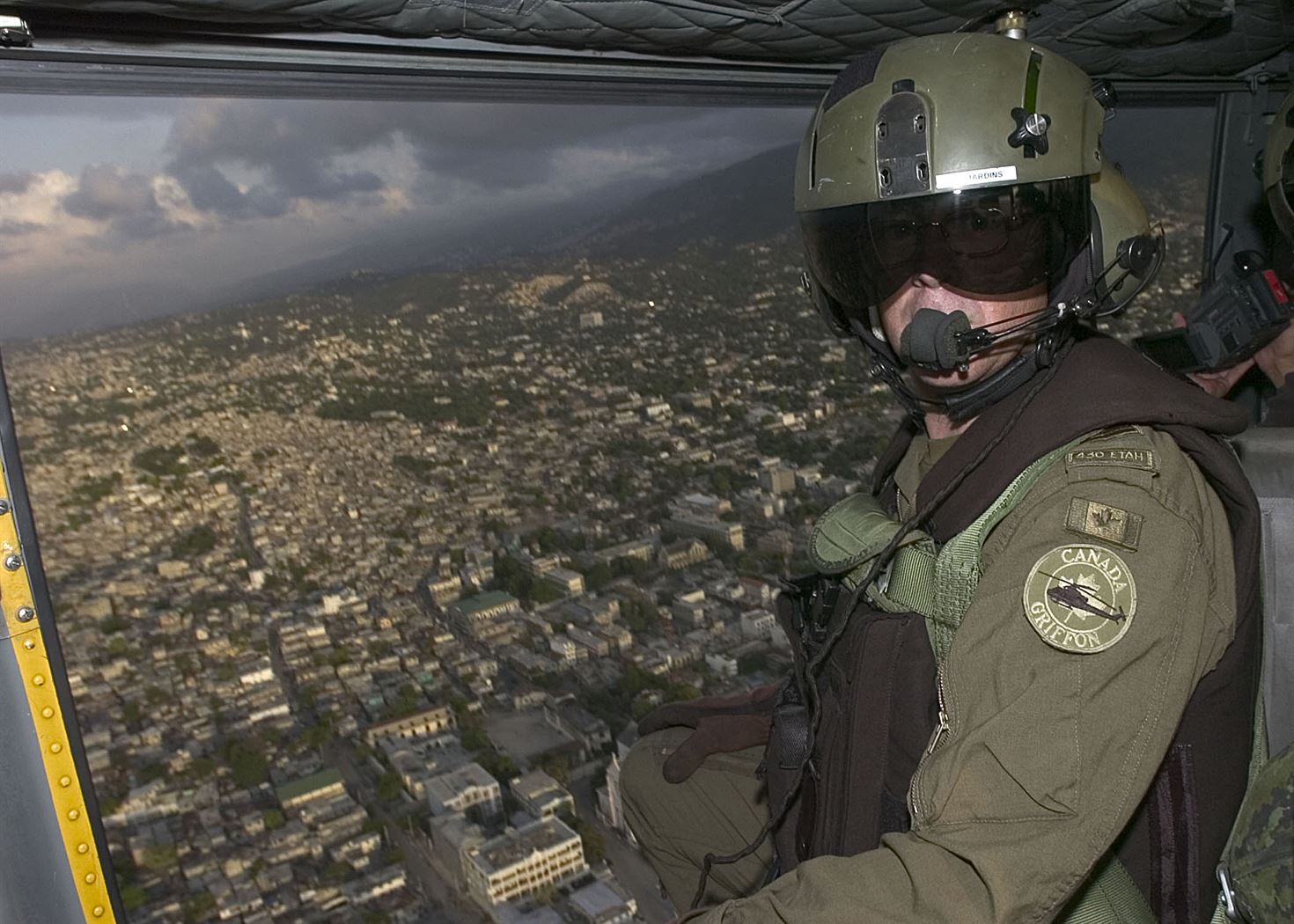 UNTMIH was succeeded by the UN Civilian Police Mission in Haiti (MIPONUH), which operated from December 1997 to March 2000. The mission was composed of 300 civilian police from Canada and 10 other countries but had no frontline military component. Its role was to continue the professionalization of the Haitian National Police. The CAF provided six armoured personnel carriers (APCs) and up to 11 driving instructors and maintenance personnel. The APCs were operated by Argentinian civilian police for a quick reaction force.

Jean-Bertrand Aristide returned as president in 2001, but a revolt against him in February 2004 soon spread across the country, forcing him to leave. The new interim president, Boniface Alexandre, requested UN support to help restore peace and security. The UN Security Council immediately authorized a Multinational Interim Force (MIF) for 90 days, led by the United States. Once order was restored, a stabilization force would follow.

In March, Canada sent 500 personnel to Haiti to serve with the MIF. The contingent included infantry, helicopters and support personnel. When the UN asked Canada to extend its contribution during the transition from the MIF to a new UN mission, Canada agreed.

Canada also provided staff officers to the MIF headquarters in in the capital, Port-au-Prince.

The UN Stabilization Mission in Haiti (MINUSTAH) began on 25 June 2004. This mission included military personnel and civilian police officers. Canadian troops in Haiti participated in emergency relief operations following heavy rains in southeast Haiti, while helicopters delivered food, water and other aid. Armed infantry soldiers also patrolled the streets of Gonaïves, both day and night, to reduce the level of violence. The CAF contingent was back home by mid-August. The first Canadian civilian police were sent to Haiti in July 2004 as part of Canada’s contribution of up to 100 police officers annually.

In January 2010, a major earthquake hit Haiti, causing widespread devastation and killing two RCMP officers. In response to an appeal by the Haitian government, the CAF provided Joint Task Force Haiti, which was composed of naval, land and air components. The force peaked at about 2,050 personnel before being gradually decreased and then closed out in early April 2010.

From June to November 2013, the CAF also provided a 34-member platoon to the mission. MINUSTAH ended in October 2017. 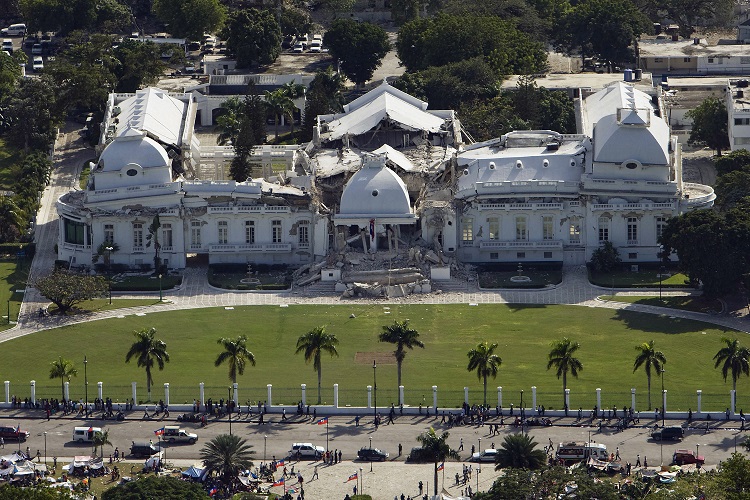 The Haitian National Palace (Presidential Palace), located in Port-au-Prince, Haiti, was heavily damaged after the earthquake of 12 January 2010. Note: this was originally a two-story structure; the second story completely collapsed.

Canadian peacekeepers were involved in the UN Mission for Justice Support in Haiti (MINUJUSTH) throughout its mandate (October 2017–15 October 2019). The mission was composed of civilian staff and police, including about 25 Canadian police officers. Its purpose was to promote and protect human rights in Haiti, assist in the further development of the Haitian National Police and help strengthen the justice and prison systems.

Since 2019, Canadian police officers have been involved in the United Nations Integrated Office in Haiti (BINUH). The political mission was established by the UN on 25 June 2019. BINUH is based in Port-au-Prince and works with state institutions in Haiti in an advisory capacity. Its stated purpose is to “strengthen political stability and good governance … advance a peaceful and stable environment … and protect and promote human rights.” As of 31 March 2021, four Canadian police officers were serving in Haiti with BINUH.