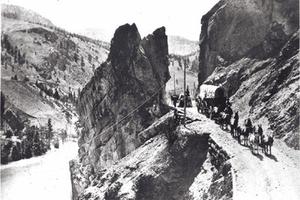 The Cariboo Road in BC was one of the most remarkable engineering achievements in early transportation in Canada (courtesy Library and Archives Canada/C-8077).

Cariboo Road, running some 650 km along the FRASER RIVER CANYON between Yale and Barkerville, BC, was begun in 1862 to provide a wagon route to the goldfields of the Cariboo region of south-central BC. By 1860 gold returns from the area convinced Governor James DOUGLAS that a system of communication was necessary. A road to the interior would relieve the plight of the miners forced to pay exorbitant rates for supplies and would make the Fraser River the great commercial highway of BC.

A contingent of Royal Engineers was brought from Britain to survey the route from Yale, at the head of navigation on the Fraser River, along extremely treacherous terrain to the administrative centre of the Cariboo. The work was begun by the army engineers, who completed the 2 most difficult stretches - 10 km from Yale to Boston Bar and 15 km from Cook's Ferry along the Thompson River. Much of the road had to be blasted from solid rock. The rest of the construction was let out to private contractors, and the road was opened in 1865. The TRANS-CANADA HIGHWAY follows much of the route of this early road along the Fraser Canyon.