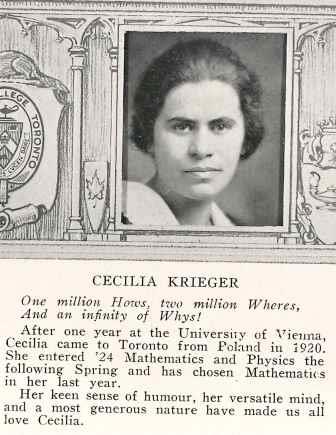 Cecilia Krieger was born in Jasło, Galicia (now Poland) on 9 April 1894, to parents Moses and Sarah. Part of a large Jewish family of merchants, she had two sisters and two brothers. Cecilia completed secondary school in Poland and then moved to Austria in 1919 to attend the mathematics and physics program at the University of Vienna.

With growing unrest and rising anti-Semitism in Europe, Cecilia Krieger, her parents and her two sisters immigrated to Canada in 1920, sponsored by a brother who had already relocated there. Soon after arriving in Toronto, Cecilia began studies at the University of Toronto. She knew very little English when she arrived and took private lessons to improve her understanding of the language. In order to pay her tuition, she spent summers working in Muskoka, Ontario, at an inn. In 1924, Cecilia received her bachelor’s degree in mathematics and began graduate studies, also at the University of Toronto, focusing on subjects such the principles of mechanics and number and set theory. She finished her master’s in mathematics in 1925.

Cecilia’s doctoral work was completed under the supervision of W.J. Webber, a pioneer in mathematical analysis who was instrumental in expanding the graduate mathematics program at the University of Toronto. Her research involved the theory of functions and calculus. Her dissertation, “On the Summability of Trigonometric Series with Localized Properties—On Fourier Constants and Convergence Factors of Double Fourier Series,” was published in two parts, in 1928 and 1930, in the Transactions of the Royal Society of Canada. Krieger received her Ph.D. in Mathematics from the University of Toronto in 1930. She was the first woman in the department to receive a doctorate in mathematics. Krieger also holds the distinction of being the first woman in Canada, and only the third person in the country, to be awarded a mathematics doctorate.

Despite her credentials and experience, Krieger spent over a decade as a lecturer before being promoted to assistant professor in 1941. She taught courses in the Mathematics and Engineering departments—an average of 13 classes a week, some with as many as 75 students in each class. With such a demanding teaching schedule there was little time for research, yet she persevered, working on her own projects in the evenings. In 1948, Krieger was a visiting lecturer in the University of British Columbia’s Mathematics department. She was promoted to associate professor at the University of Toronto in 1952. (Details of Krieger’s university appointments have been drawn from records held at the UFT Archives. Some sources provide different dates and maintain that she was never promoted beyond assistant professor.)

A dedicated instructor, Krieger was noted for her supportive and friendly interactions with students. She would often hold socials in her home, providing tea and conversation. Krieger worked closely with graduate students in particular, encouraging deeper engagement with their studies and urging the pursuit of advanced degrees.

When asked in 1934 about women in mathematics, Krieger answered with seeming equivocation: “It is a subject on which it is very difficult to generalize. It really depends on the individual. To be sure, so far the greatest work has been done by men, but that doesn’t mean that women will not make their mark.”

Through her work with the Canadian Association of University Women’s Fellowship Committee, Krieger helped women, including mathematicians, reach their goals in higher education. Renowned mathematician Cathleen Morawetz, for example, lauded Krieger for supporting her interest in mathematics and physics. When Morawetz revealed that she was forgoing graduate studies due to financial pressures, Krieger helped to arrange funding through the Fellowship Committee, enabling Morawetz to attend the Massachusetts Institute of Technology.

Krieger officially retired from the Math department in 1961 but continued to teach at the university for another five years.

DID YOU KNOW?
Around the time Cecilia Krieger began teaching mathematics at the University of Toronto, women faced significant barriers to employment at the university. Many department heads resisted hiring or promoting women faculty, and in 1931 it became official university policy to only employ married women if the board of governors was satisfied that “such persons require to earn money for the support of their families.” It is possible that this contributed to Krieger’s decision not to marry until relatively late in life.


For many years, Krieger acted as a family breadwinner, providing for her unmarried sisters after their father’s death in 1929. They also lived with her for a time. In later years, she was the sole support for her mother and disabled sister. The Kriegers also supported a refugee family who arrived in Toronto after fleeing Jewish persecution in Europe during the Second World War.

In 1953, Krieger married Dr. Zygmunt Dunaij, a physician and Holocaust survivor. After her husband died in in 1968, she returned to teaching, taking a position at Upper Canada College in Toronto. Krieger taught there until her death on 17 August 1974.

In her time, Krieger was described as “a miracle of modesty, disclaiming any particular credit for her work and denying that she had done anything unusual.” Yet she did leave her mark on mathematics and blazed a path for the women who followed her. Dr. Cathleen Morawetz later described her as “the most capable woman mathematician” in Canada during her career. In 1995, Krieger’s contribution to mathematics was celebrated with the inauguration of the Krieger-Nelson Prize. Created by the Canadian Mathematical Society, the honour is named for Krieger and fellow groundbreaking female Canadian mathematician Evelyn Nelson. It is presented to female mathematicians involved in innovative research. The Krieger-Nelson Prize recipient also presents a lecture to the society’s annual general meeting. The prize itself is distinctive: an Inuit soapstone sculpture is awarded to each year’s distinguished Krieger-Nelson scholar. Cathleen Morawetz was presented with the award in 1997.

Krieger’s papers, including her correspondence with Wacław Sierpiński, are held at the University of Toronto.