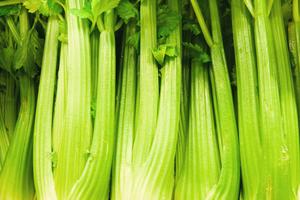 Celery (Apium graveolens var. dulce) is a biennial plant of the Umbelliferae family and it is widely grown as an annual for its nutritious leafstalks. Rape celery or celeriac (A. graveolens var. rapaceum) is grown on a more limited basis for its thick, edible root. Celery originated in the Mediterranean basin, was first grown as a medicinal plant, and was possibly first cultivated as a condiment in Italy in the 16th century. Celery has a well-developed root system, a short, fleshy crown (modified stem) and a rosette of leaves. Celery's characteristic taste and odour is produced by volatile oils in its stalk, leaves and seeds. It is rich in ascorbic acid.

Preferring a cool climate, celery is sown in greenhouses in spring and transplanted after about 60 days, needing another 90 days of growth in the field to reach maturity. It also requires fertilizer and regular irrigation to produce well. Mechanical harvest is increasing; harvested celery is peeled, measured, chilled in iced water and crated. Principal diseases are Septoria blight and black heart. In Canada, about 750 ha are devoted to celery production, mainly in Québec and Ontario.