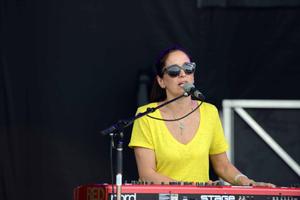 Chantal Kreviazuk. Singer, pianist, songwriter, actor, b Winnipeg 18 May 1974. Chantal Kreviazuk trained in classical piano (beginning at age five) and singing. She studied English literature at the University of Manitoba, performed commercial jingles, and played at weddings and lounges before emerging as an adult contemporary singer-songwriter and pianist in the late 1990s. She signed with Sony Canada and released 4 albums, 19 singles, and 15 music videos 1996-2006. She has co-written songs with the Canadians Raine Maida (her husband and lead singer of the rock band Our Lady Peace); Avril Lavigne; and 2006 Canadian Idol winner Eva Avila; and the Americans Gwen Stefani; Mandy Moore; Hilary Duff; and Kelly Clarkson (including the US No. 1 hit "Walk Away").

Chantal Kreviazuk's 1996 debut album, Under These Rocks and Stones, led to her 1997 Juno nomination for best new artist, and was certified double platinum (200,000 copies). It includes the songs "God Made Me" and "Surrounded." Her musical style embraces heavier, alternative rock songs featuring electric guitar, bass, and drums (arguably similar to Alanis Morissette) as well as keyboard-oriented pop-rock songs (similar to Sarah McLachlan or to 1974-82-era Supertramp). Her style also features a relatively positive, lyrical outlook that includes numerous songs about relationships, life, and death (similar to the Beatles), sung in her pleasant mezzo-soprano voice.

The 1999 album Colour Moving and Still also went double platinum in Canada, and peaked at No. 9 on the Canadian album charts; it includes the songs "Before You," "Dear Life," and "Far Away." Kreviazuk won Juno awards in 2000 for best adult/pop album and best female artist and performed "Before You" at the awards ceremony. Her 2002 album, What If It All Means Something, went gold (100,000 copies), and peaked at No. 29; it includes the song "In This Life," which she performed on The Tonight Show. After the births of her first two sons 2004-05, she released Ghost Stories (29 Aug 2006), which was premiered on the Canadian music television channel MuchMoreMusic 24 Jul 2006. Kreviazuk was nominated in 2007 for Juno awards for single of the year for "All I Can Do" and best pop album; "Wonderful" won a 2008 SOCAN Pop Music Award. A greatest hits album, Since We Met: The Best of 1996-2006, was released in 2008.

Chantal Kreviazuk has contributed soft rock songs to a number of major US movies and TV shows. Her only international hit appeared in 1998: a version of John Denver's ballad "Leaving on a Jet Plane," which appeared in the blockbuster movie Armageddon and was a successful single. In 1999, her cover version of Randy Newman's ballad "Feels Like Home" appeared on the TV show Dawson's Creek and her version of the Beatles' "In My Life" appeared on the TV show Providence. In the 2000s, her song "In This Life" appeared in the movie Saved!, and "Time" was used in the credits of the movie Uptown Girls and in such TV shows as Laguna Beach: The Real Orange County and Joan of Arcadia. Her song "This Year" appeared on the TV show Serendipity, and "These Days" and "I Want to Know" were written and recorded for the 2005 movie The Sisterhood of the Traveling Pants. "It's All About a Kiss" was used in the 2006 film Just My Luck. Kreviazuk debuted as an actor in a substantial role in the 2001 Canadian film Century Hotel, for which she and Maida also contributed the song "Can't Make it Good." In 2007, she starred in and co-produced the movie Pretty Broken, and she appeared 2006-08 as spokesmodel for L'Oréal Canada.