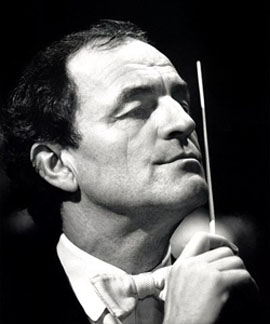 Conductor Charles Dutoit.
(photo by Lois Siegel)
After conducting the Bern Symphony Orchestra for several years, Dutoit was named artistic director of Montreal Symphony Orchestra (MSO) in 1977, which under his direction became a world-class ensemble. Together, exclusively for Decca/London, they made more than 80 celebrated recordings, which won more than 40 major national and international prizes and distinctions including the Grand Prix du président de la République (France), the Prix mondial du disque de Montreux, the High Fidelity International Record Critics' Award, the Amsterdam Edison Award, the Japan Record Academy Award, the German Music Critics' Award and numerous Juno and ADISQ awards, as well as a Grammy for the best opera recording for Berlioz' Les Troyens.

Starting in 1981, Charles Dutoit and the MSO toured frequently in the US, Europe, Japan and South America, and performed at the Hollywood Bowl, the Ravinia and Tanglewood festivals, and in New York. Dutoit regularly guest conducts major American orchestras such as the New York Philharmonic, the Pittsburgh Symphony, and the Boston Symphony. He is artistic director and principal conductor for the Philadelphia Orchestra's concerts at the Saratoga Performing Arts Center in Saratoga Springs, New York - an important North American summer festival. He has conducted the Berlin and the Munich Philharmonic Orchestras, the Royal Concertgebouw of Amsterdam, and guest conducted orchestras in Paris and London. In 1996-97, he was principal conductor of the NHK Symphony Orchestra in Tokyo, and its music director since September 1998.

As music director of l'Orchestre national de France (1991-2001), Dutoit toured extensively in Germany, South Africa, Italy, Slovenia, Austria, Poland, Denmark, China and Vietnam. Charles Dutoit holds honorary doctorates from McGill University, the Université de Montréal and the Université Laval. In 1982, the Canadian Music Council named him Musician of the Year. His contributions to musical life in Canada earned him the Canadian Musical Council Medal (1988) and a Diploma of Honour from the Canadian Conference of the Arts (1994). Named an Honorary Citizen of Philadelphia (1991), Great Montrealer (1995), Grand Officier de l'Ordre national du Québec (1995), he was promoted in 1996 to Commandeur de l'Ordre des Arts et des Lettres par la République française, after having been an Officer since 1988. In 1998, Charles Dutoit was appointed an honorary Officer of the Order of Canada. He resigned from the MSO in 2002.