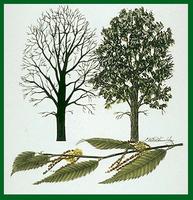 This species is on the verge of disappearing in North America because of the ravages of a blight (artwork by Claire Tremblay).

Chestnut (Castanea), genus of trees of beech family (Fagaceae). Of 10 known species, one, American chestnut (C. dentata), is indigenous to Canada. Its distribution is limited to north of Lake Erie. This species is on the verge of disappearing in North America because of the ravages of a blight caused by a fungus which appeared at the end of the 19th century. The few surviving trees barely reach 10 m in height; formerly specimens reached more than 30 m in height and 1 m in diameter. Leaves are alternate and spear-shaped, with coarsely toothed margins. European sweet chestnut (C. sativa) is occasionally planted as an ornamental. Horse chestnut (Aesculus hippocastanum), also an ornamental, is not related, although it can be mistaken for Castanea species. Chestnuts normally grow in sandy or gravelly, well-drained soils. The fruit is edible. The light, soft, decay-resistant wood was once used for posts and poles.