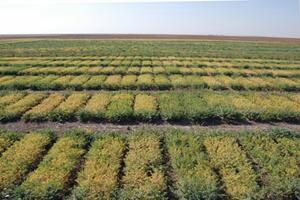 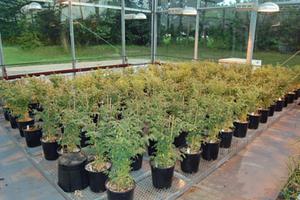 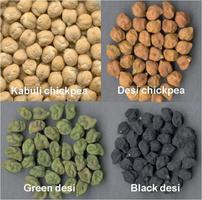 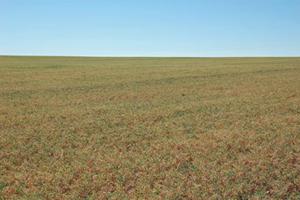 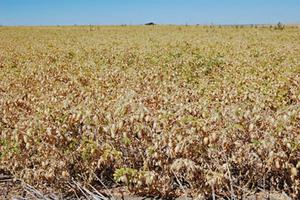 Chickpea (Cicer arietinum L.) is part of the legume family. The two primary centres of origin for chickpea are Southwest Asia and the Mediterranean, while Ethiopia is a secondary centre of origin. Today, chickpea represents the third most important pulse crop in the world after dry bean and pea, making up 15% of the world's total pulse production.

Chickpea is a cool-season crop usually grown as a winter crop in India, the Middle East, Australia, and South and Central America. It grows best if daytime temperatures are between 21 and 29ºC and nighttime temperatures are between 18 and 21ºC. The best temperature for germination is 15ºC, however, for desi chickpea, germination can begin when soil temperatures are as low as 5ºC. Chickpea is a relatively drought tolerant crop. Its long taproot allows the chickpea plant to use water to a greater depth than other pulse crops. In the absence of disease, chickpea performs best when there is between 20 and 30 cm of rainfall during the growing season, and when cropped on soils that are well drained.

Chickpea cultivation has several agronomic properties that are beneficial to cropping systems. It increases soil fertility due to the plants' ability to fix atmospheric nitrogen only in association with Cicer specific Rhizobium bacterial species called Bradyrhizobium (the strain which infects lentil and field pea does not work). It also stimulates mycorrhiza populations in the soil to the benefit of other crops in rotation, thus avoiding excessive use of chemical fertilizers and soil acidification.

Two different types of chickpeas are produced, each with a separate use and a separate market. The first is the kabuli or garbanzo type, large-seeded, ram-head shape, cream to white-coloured seeds with a thin white seed coat. The seeds are about twice the size of field pea (260 to 600 g/1000 seeds). Kabuli chickpea is often made into snacks (in South Asia), ground into hummus (in the Middle East) or canned whole for the salad bar trade (in North America). The second is the desi type, small-seeded (120 to 300 g/1000 seeds) with a thick, hard and coloured seed coat (from green to purple, brown or black), which is often exported whole to the Indian sub-continent. The desi type is usually prepared for consumption either by dehulling and splitting (chana dal) or by dehulling and grinding into flour (besan). The desi type accounts for about 85 to 90% of the world's chickpea production while the remainder is of the kabuli type. Regarding the origin of the kabuli and desi chickpeas, it is reported that desi originated first followed by kabuli, which was selected from the pool of desi type. Linguistic evidence shows that the kabuli chickpea reached India via the Afghan capital Kabul about two centuries ago and thus acquired the Hindi name "kabuli chana."

Chickpeas are a good source of cholesterol-lowering fibre, as are most other beans. In addition to lowering cholesterol, chickpeas' high fibre content prevents blood sugar levels from rising too rapidly after a meal, making these beans an especially good choice for individuals with diabetes, insulin resistance or hypoglycemia. When combined with whole grains such as rice, chickpeas provide virtually fat-free high quality protein.