Chief Joe Capilano (S7ápelek) (born 1854 in the traditional Squamish Nation territory in British Columbia; died 10 March 1910 in Yekw’ts, BC) was a Squamish Nation member and became one of the most influential Indigenous leaders in British Columbia, beginning in the late 19th century. His rise to this position was due in part to the encouragement of the Catholic Bishop who recognized S7ápelek’s devotion to his faith and his impressive abilities as an orator and leader. As the chosen successor to Chief Láwa Capilano, Joe S7ápelek became better known as Chief Joe Capilano and spent the rest of his life advocating for Canada’s recognition of Indigenous rights.

Chief Joe Capilano (S7ápelek) (born 1854 in the traditional Squamish Nation territory in British Columbia; died 10 March 1910 in Yekw’ts, BC) was a Squamish Nation member and became one of the most influential Indigenous leaders in British Columbia, beginning in the late 19th century. His rise to this position was due in part to the encouragement of the Catholic Bishop who recognized S7ápelek’s devotion to his faith and his impressive abilities as an orator and leader. As the chosen successor to Chief Láwa Capilano, Joe S7ápelek became better known as Chief Joe Capilano and spent the rest of his life advocating for Canada’s recognition of Indigenous rights.

Born into the Squamish First Nation around 1854, Joseph S7ápelek, also known as Chief Joseph (Joe) Capilano and Hyas Joe, is best known as a dedicated campaigner for Indigenous rights and title (see also Indigenous Land Claims in Canada) and an advocate for the retention of Indigenous cultures. Little is known of S7ápelek’s early life in the village of Yekw’ts on the Upper Squamish River. In a Catholic wedding immediately after his baptism in 1872, S7ápelek married the widowed Mary Agnes Líxwelut, born at Potlatch Creek in Howe Sound but then living also on the Squamish River. The couple brought at least 10 children into the world during their long marriage, yet many died before adulthood.

An 1876 census records the family still living at Squamish, where S7ápelek supported his family through traditional fishing and hunting. However, the family soon moved to the Mission Indian Reserve in Burrard Inlet, where the Canada Census for 1881 recorded S7ápelek ’s occupation as a labourer, likely working at the Moodyville sawmill.

Move to the Capilano Indian Reserve

By the 1890s, S7ápelek and his growing family lived on the Capilano Reserve, the community of Xwemélch’estn that colonizers named after the renowned Chief Kiapalánexw. One story tells how the Catholic Bishop, Paul Durieu, encouraged S7ápelek’s move to the Capilano Reserve so that the faithful convert could persuade the residents to renounce the Methodist missionaries and adhere to Catholic teachings.

After the April 1895 death of the Capilano community’s Chief Láwa Kiapalánexw, a direct descendant of the celebrated leader, there was no clear successor and the community recognized Joe S7ápelek as Chief. By 1897, historical correspondence indicates that “Chief Joe Kapilano” had organized a work party to build a Catholic church on the reserve, with labour provided by the residents and the Department of Indian Affairs providing sugar and flour to the volunteers. S7ápelek’s leadership ability and oratory, along with his wife being a member of old Chief Kiapalánexw’s family, brought him considerable respect and influence among the First Nations.

Early in 1906, S7ápelek joined other Indigenous leaders from the British Columbia coast and interior at Cowichan to discuss land claims and complaints about fishing and hunting regulations. The chiefs decided that in the summer of 1906, with funds raised in the communities, three BC chiefs led by S7ápelek, now referred to as Chief Joe Capilano, would travel to Britain and lay their grievances before the monarch. Members of the Kiapalánexw family agreed that Chief Capilano should carry for this visit the most honourable name, Kiapalánexw.

The British did not grant the interview to Chief Capilano’s party on their own initiative. Superintendent General of Indian Affairs, Frank Oliver, wrote to the High Commissioner for Canada informing him that the chiefs had stopped in Ottawa on their way to England where they wished to pay their respects to the King, and were asking for a letter of recommendation. Oliver wrote that the objective of the chiefs’ journey was to, “express personally their allegiance to His Most Gracious Majesty and their affection for the late lamented Queen whom they loved as a mother and for whom they continue to mourn.” 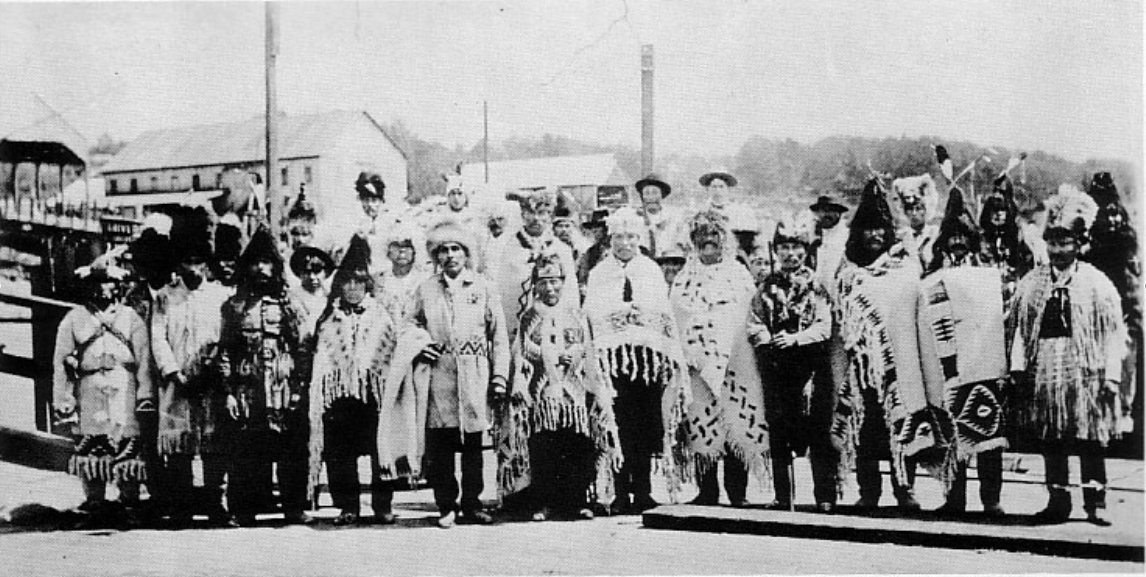 By August 1906, the chiefs had arrived in London. Secretary of State for the Colonies, Lord Elgin, sent a confidential telegram to Canada's Governor General, Earl Grey, asking Grey to, “consult [the] Prime Minister and inform him if he considered it desirable for his Majesty to see them.” Grey approved the meeting, yet cautioned that if they have grievances, “HM [His Majesty] has no control over British Columbia lands.” Thus, while Chief Capilano and his delegation finally had a 15-minute audience with the King on 14 August 1906, they achieved no tangible results. A petition had been published in BC newspapers in July 1906; at least one British newspaper account stated that Chief Capilano did present this petition to the King, although most versions of the visit say that Capilano made an oral presentation to His Majesty and did not present the petition.

After the BC chiefs’ audience with the King, a reporter for the London Daily News asked Chief Capilano explicitly: “Has the King granted your petition?” In response, Capilano is said to have shaken his head gravely.

The following spring, the chiefs followed up their visit by submitting two petitions. These were sent directly to the King. Again, Lord Elgin asked Canada’s Governor General, Earl Grey, for his Ministers’ observations on the subject and their suggestion as to the reply that King Edward VII should make to the chiefs. The Secretary of State again wrote to Earl Grey on the subject of the chiefs’ petitions and advised him that His Majesty would not take any steps on behalf of the Indigenous petitioners, as the matter was one for consideration by the Department of Indian Affairs in Canada (see also Crown Indigenous Relations and Northern Affairs Canada).

The failure of the 1906 delegation to produce more results did not end the agitation by the petition’s supporters. Chief Capilano, following his visit to London, toured the province informing First Nations about his meeting with the King. These meetings, and the delegation’s visit with the King, brought considerable embarrassment to the Canadian government. Local newspapers labelled Chief Capilano an agitator and troublemaker; one writer described him as a menace who was “inflaming the minds” of the First Nations through his “fiery oratory.” Nevertheless, the 1906 delegation and the follow-up Cowichan petition of 1909 put considerable political pressure on the provincial and federal governments, eventually resulting in the joint Royal Commission on Indian Affairs for British Columbia (1913–1916), known as the McKenna-McBride Royal Commission.

While in London in 1906, Chief Capilano met the Canadian poet and entertainer, Pauline Johnson, known by her Mohawk (Kanyen'kehà:ka) name, Tekahionwake. They reunited in Vancouver in 1909 and their friendship led to her inclusion of 12-13 freely edited Squamish legends told by Chief Capilano in Johnson’s 1911 publication Legends of Vancouver. Chief Capilano died a year before this romanticized version of his stories came out. As Ralph Maud stated in his survey of British Columbia mythographers, “One wonders if he would have recognized it as his."

Chief Capilano returned from London with photographs of the late Queen Victoria and an autographed picture of King Edward and Queen Alexandra, along with a silver sovereign bearing the image of Queen Victoria. These became cherished family possessions, later saved from a house fire by Chief Capilano’s widow, Lixwelut, who recalled her husband’s meeting with the King as “the highlight of his life.” The buckskin jacket worn on Chief Capilano’s visit passed down to his son, Chief Mathias Joe, who donned the garment when he attended the coronation of King George in 1937. The colourful Salish blanket, also seen in photographs of Chief Capilano’s 1906 delegation, became part of the collections of the Canadian Museum of History in the 1920s. In 2009, the historic blanket was loaned to Whistler’s Squamish-Lil’wat Cultural Centre for display. 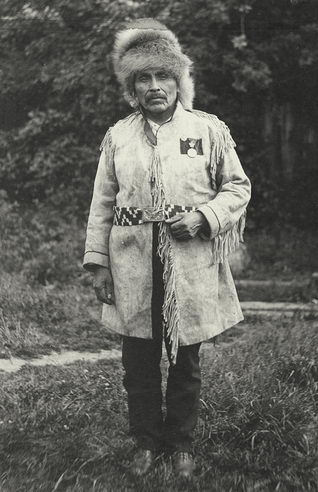 Though Chief Capilano did not receive immediate action from King Edward VII, the chief’s meeting with the King had a widespread influence on subsequent Indigenous leaders. Chief Capilano’s great-grandson, Chief Joseph Mathias of the Squamish Nation, one of the most highly regarded Indigenous leaders in Canada in the 20th century, was vice-chief of the Assembly of First Nations for British Columbia, and a member of a task force that recommended the establishment of the BC Treaty Commission. Chief Joe Mathias died on 10 March 2000, 90 years to the day after the passing of his illustrious ancestor, Chief Capilano in 1910.