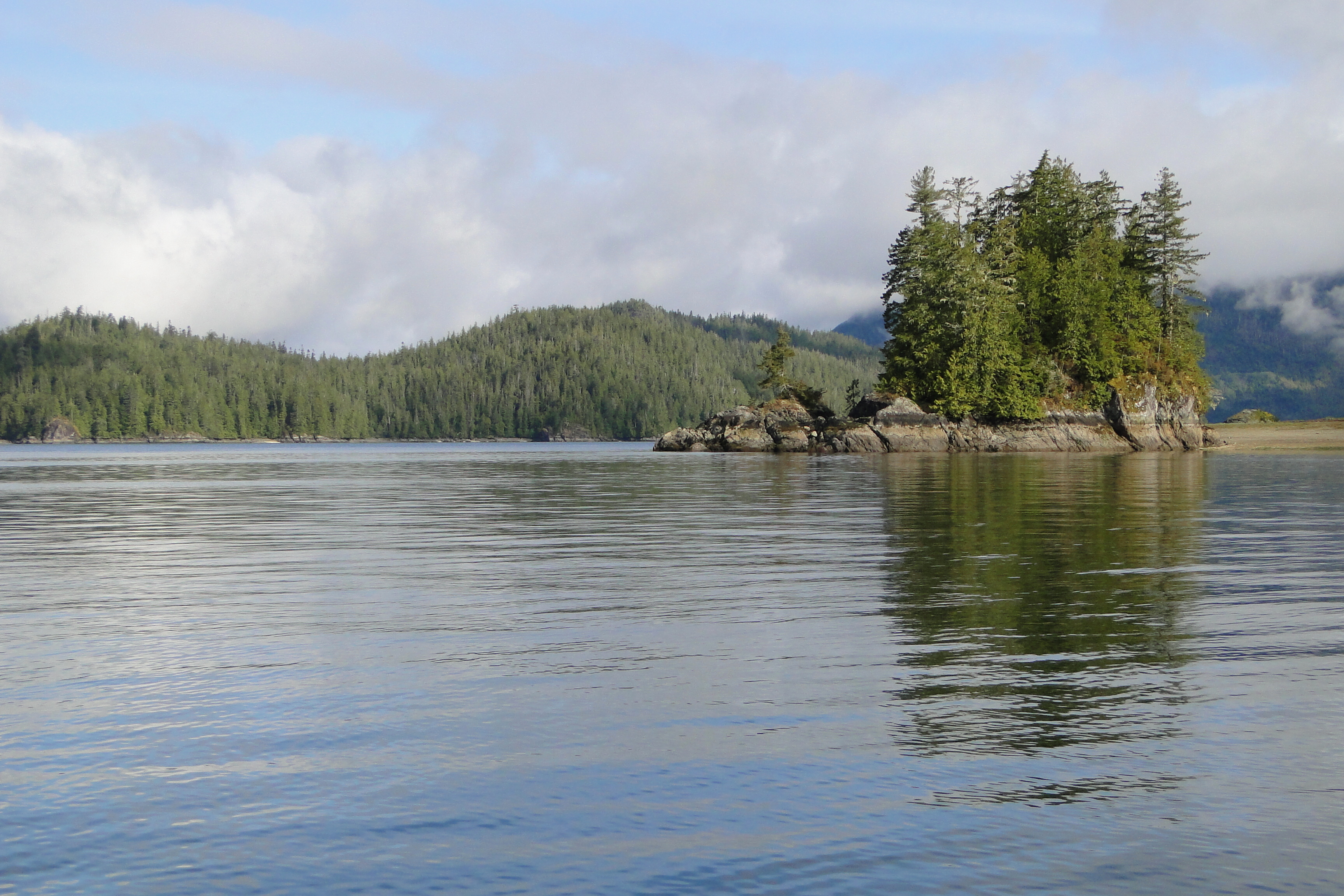 The Estevan Lowland, comprising Esowista and Hesquiat peninsulas and the windward islands between, is of geologic origin distinct from central Vancouver Island. The narrow coastal strip was overlain with deep sedimentary deposits at the end of the last glaciation. Pounding surf has created magnificent beaches framed by rocky headlands, most notably Long Beach, in Pacific National Park. Bogs and scrub forest are widespread on the lowland strip.

Fog and heavy year-round rainfall are characteristic of this coast. Annual precipitation averages 3295 mm at the Tofino airport. The Canadian record for a 24-hour rainfall of 489 mm was recorded (1967) at the Brynnor mine near Kennedy Lake.

The amount of rain influences the size of the trees. Record-size western hemlock, western red cedar and Sitka spruce grow on Meares Island, near Kennedy Lake and in other spots. More significantly, the sound has one of the largest continuous old growth temperate rain forests on the Pacific Coast.

Nuu-chah-nulth (Nootka) groups have occupied the sound for at least 2000 years. The largest is the Tla-o-qui-aht (Clayoquot) nation, from whom the name of the sound is derived. The first Europeans known to enter the sound were with the sea otter trader James Hanna in 1787. Attacks on visiting ships, notably the Tinquin (1811), ensured little contact for decades. A Catholic mission was established by Reverend Augustin Brabant at Hesquiat in 1875. Norwegian, Chinese, English and Japanese settlers moved into the Tofino area beginning in the 1890s. Small steamships provided early links with Victoria. After World War II, logging roads from Alberni valley reached the area; the highway was completed in 1972.

Of the many fisheries Clayoquot Sound has sustained, the most important is salmon. Floating salmon-packing plants were common in the sound until after World War II. Commercial fisheries now share the waters with aquaculture, shellfisheries and sportfishing.

All the region's forests were licensed in 1955 to 2 forest companies; nearly one-fourth of the timber in the sound has since been logged. Logging contractors move camps about the northern sound; the village of Ucluelet is the logging centre for the southern sound. Logs are trucked or transported by water to mills in Port Alberni and elsewhere.

The area is most widely known for a controversy over forest practices that began in the 1970s. In 1993, after much study, the BC government established a logging zone amounting to 62% of the crown land in Clayoquot Sound, including 17% earmarked for careful logging. Protected areas totalled 33%, but only 14% remains protected old-growth forest, notably the 21 km long Megin River valley (added to Strathcona Provincial Park).

The plan sparked an outcry, unprecedented for a forest land-use plan. For 5 months a nonviolent protest blocked access to the only bridge to a logging site near Kennedy Lake. Logging company Macmillan Bloedel Ltd. obtained a court injunction prohibiting blockades, and the RCMP, on instruction from the province, charged violators with criminal contempt. Thousands joined the protest. A total of 859 people were arrested, tried and convicted in BC Supreme Court -- the largest act of civil disobedience in Canadian history.

In late 1993 the Nuu-chah-nulth and the BC government signed an interim agreement providing for local aboriginal review of logging plans in the sound while the land claim is settled.

A scientific panel set up to study alternatives to clearcut logging and to establish "the best forest practices in the world" recommended an end to large-scale clearcutting. The panel's findings are being implemented amid continuing debate about the rate and methods of logging in Clayoquot Sound.

In January 2000 the entire sound, including part of Pacific Rim National Park Reserve, was designated as a biosphere reserve, adding to the global profile of the wilderness area.