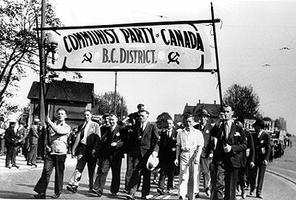 Vancouver, BC, in the 1930s (courtesy Vancouver Public Library).

Collectivism, a group of ideologies, political, social and religious movements which argue that man is by nature co-operative, not competitive. Collectivism has taken many forms in Canadian history. The settlement process forced people in each stage of colonization to work together at building "bees" and road construction, and at overcoming adversities. The pioneer years were characterized, therefore, as much by mutual aid as by individualism. Intellectually, collectivism has many diverse roots. French Canadians, LOYALISTS and many 19th-century immigrants specifically rejected the 18th-century liberal individualist philosophy common in the US.

As the social evils of industrialization and urbanization unfolded in the later 19th century, many Canadians saw the basic problem as an excess of individualism. Early labour movements, farm organizations such as the Grange and Patrons of Industry, church reform groups (see SOCIAL GOSPEL) and even professional groups advocated collective protection against the changes of the age.

In politics collectivist perspectives have been argued most vigorously by a series of socialist parties since the late 19th century. In the 20th the NEW DEMOCRATIC PARTY (successor to the CO-OPERATIVE COMMONWEALTH FEDERATION) and the COMMUNIST PARTY have been the main proponents of collectivism. The CO-OPERATIVE MOVEMENT, in its more idealistic institutions, has advocated an economic restructuring of society on a collectivist basis.

Many religious and immigrant groups have also established their communities along collectivist lines. These include MENNONITES, HUTTERITES and DOUKHOBORS. English, Scottish and Finnish groups have also developed collectivist communities, particularly on the Prairies and the West Coast. During the 1960s hundreds of young people organized communal settlements. Though seldom perceived as a major force in Canadian history, collectivism - instinctive or deliberately structured - has been a common response and remedy to contemporary problems.