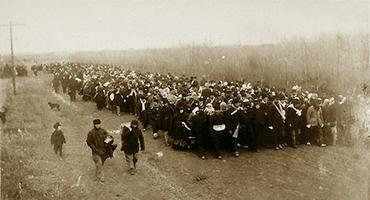 Walter v Attorney-General of Alberta (1965-69) tested the constitutional validity of the Communal Properties Act (1955), which had the effect of restricting the amount of lands that could be owned communally by religious groups such as the HUTTERITES and the DOUKHOBORS. Permission from the provincial government was required in order to acquire lands for the purpose of establishing a communal colony. Although it was argued that the Act dealt with religion and that only Parliament could pass legislation affecting religious freedom, the SUPREME COURT OF CANADA in a unanimous judgement upheld the validity of the statute, saying that it related to land ownership in Alberta and that the province had the constitutional competence to pass legislation dealing with "property in the province," even if it incidentally affected religious matters.

The Act was repealed, but the case is of historical interest because it tested the validity of what might be considered discriminatory legislation. The case also demonstrates how technical and superficial the Supreme Court of Canada was in protecting fundamental freedoms of Canadians.