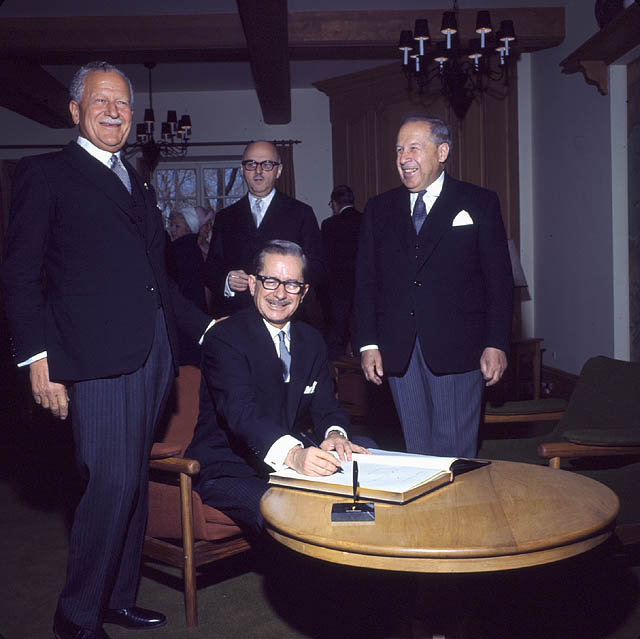 Roland Michener was born in Alberta on 19 April 1900 to Edward Michener and Mary E. Roland. He grew up in the city of Red Deer, where his father was mayor and then a member of the provincial legislature for Red Deer (Edward Michener would lead Alberta’s official opposition Conservatives from 1910-17, and was a senator from Alberta from 1918-47).

After attending local schools, Roland studied at the University of Alberta, where he graduated in 1920 with a bachelor of arts. He then attended Oxford University as a Rhodes scholar. At Oxford, he met and became a hockey teammate and lifelong friend to Lester B. Pearson, who would go on to become prime minister. After studying law at Oxford, Michener returned to Canada and started practising law in Toronto in 1924. He founded the prominent law firm Lang Michener.

Michener married Norah Willis in 1927 in Toronto. Norah became a respected political philosopher and academic. The couple had three daughters. In 1969 one daughter, the prominent journalist and art critic Wendy Michener, died unexpectedly at age of 34 while Roland Michener was governor general.

Michener described himself as “a small 'l' liberal and a capital 'C' Conservative.” He first ran for political office in 1943 as a Conservative candidate for the Ontario legislature, but was defeated. He tried again in 1945 and won the Toronto riding of St. David, serving as a member of the Provincial Parliament (MPP) until 1948. This included several years in the Cabinet of Ontario Premier George Drew.

In 1949, Michener entered federal politics. He failed in his first attempt, but was elected in 1953 as the Progressive Conservative member of Parliament (MP) for Toronto St. Paul's, which he represented until 1962.

He served as speaker of the House of Commons from 1957 to 1962, and was responsible for the smooth introduction of simultaneous, French and English interpretation in the House in 1959. As speaker, he was civilized and witty but clashed frequently with Prime Minister John Diefenbaker who complained that Michener was too fair to the opposition parties. In one incident, Diefenbaker refused to sit down when Michener called him to order. Impressed by Michener, a group of university professors and others launched a campaign to make him the permanent speaker. Under their plan, he would run as an independent in the next federal election and the other parties would not run local candidates against him. However, the agreement did not come to pass.

Michener was defeated in the 1962 election — the first time since Confederation in 1867 that a House speaker had lost his riding in an election in which his party formed the government (Diefenbaker’s Conservatives won the election, but were reduced to a minority government). When Prime Minister Lester Pearson won a minority Liberal government in 1963, he offered to nominate his friend as permanent speaker, but Michener turned down the offer. Instead, in July 1964, Pearson appointed Michener high commissioner to India and, six months later, the first Canadian ambassador to Nepal. He served both roles until 1967, studying Hindi while doing so.

After the sudden death of much-loved Governor General Georges Vanier in 1967, Michener was appointed to the post. He was the first former MP to occupy Rideau Hall, and the third governor general born in Canada. “I don’t think there was anybody inside or outside the public service who could qualify better than Michener,” recalled Liberal Cabinet minister Paul Martin Sr. “People just felt that this was a good appointment.”

1967 was the year of Canada’s Centennial celebrations. Only days after becoming governor general, Michener officially opened Expo 67 in Montreal. During his first year in office, he also greeted a huge procession of visiting dignitaries – 53 heads of state arrived to celebrate the Centennial and visit Expo 67. Guests ranged from United States president Lyndon Johnson, and Jacqueline Kennedy, to Princess Grace of Monaco. He also welcomed French president Charles de Gaulle at his first Canadian stop in Quebec City, before de Gaulle would go on to make his infamous “Vive le Québec libre” speech in Montreal. The crowd in Quebec City greeted de Gaulle warmly, but booed Michener when “God Save the Queen” was played.

The Order of Canada also came into being in 1967, with Michener the first to hold the honour. He presided over the investiture of the first Order of Canada recipients in November 1967 at Rideau Hall. “They desire a better country,” he said of the honourees, who included Arthur Lismer, Jean Drapeau, Pauline Vanier (see Georges Vanier), Maurice Richard, Louis St-Laurent and Inuit artist Kenojuak. “Our intention is to do honour to those who, in many different ways, have served Canada with great distinction and have thereby contributed to the well-being of their fellow man.”

In October 1970, the Front de libération du Québec (FLQ) — which in previous years had detonated a number of bombs in Montréal — kidnapped the British trade commissioner James Cross, and kidnapped (and later murdered) Quebec's minister of labour Pierr Laporte. In response to what became known as the October Crisis, Prime Minister Pierre Trudeau proclaimed the War Measures Act, which suspended basic civil rights.

The act required Michener’s signature in order to become law. Civil servant Jack Cross, who brought the law for the signing at Rideau Hall, recalled later that Michener, who was waiting in his dressing gown and pyjamas, was uncertain about the law and Cross had to do some explaining before the governor general agreed to sign. “He had some hesitation about signing a document that strong,” Cross said.

In 2010, it was revealed that Michener had also been an intended target of the FLQ kidnappers.

During his term, Michener and his wife Norah democratized the office by removing the practice of women curtseying before the governor general. Among the Michener’s other innovations were frequent state visits abroad and periodic meetings with provincial lieutenant-governors. In 1972, the Micheners also returned the Governor General’s New Year’s Levee to Rideau Hall from the Senate chamber. 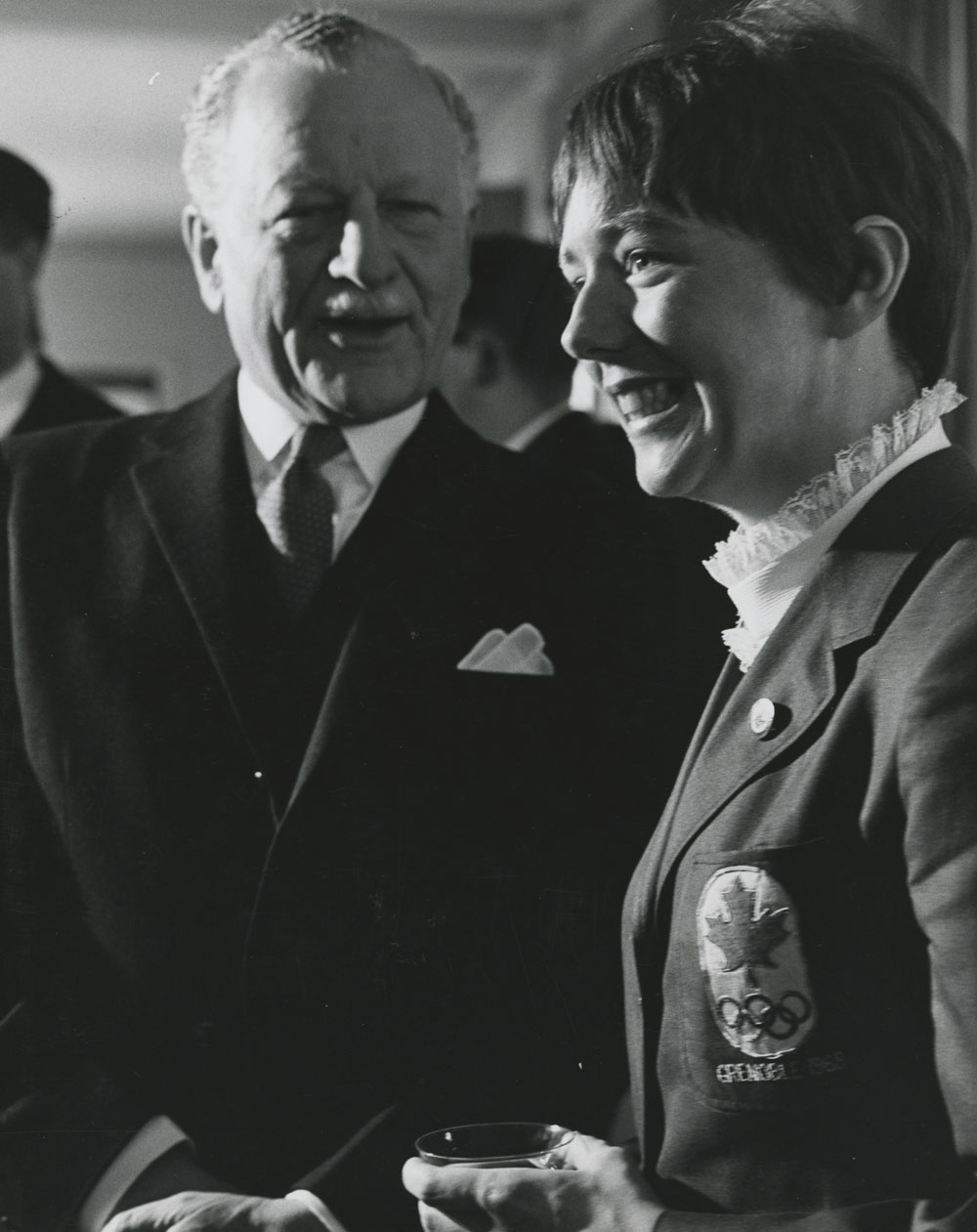 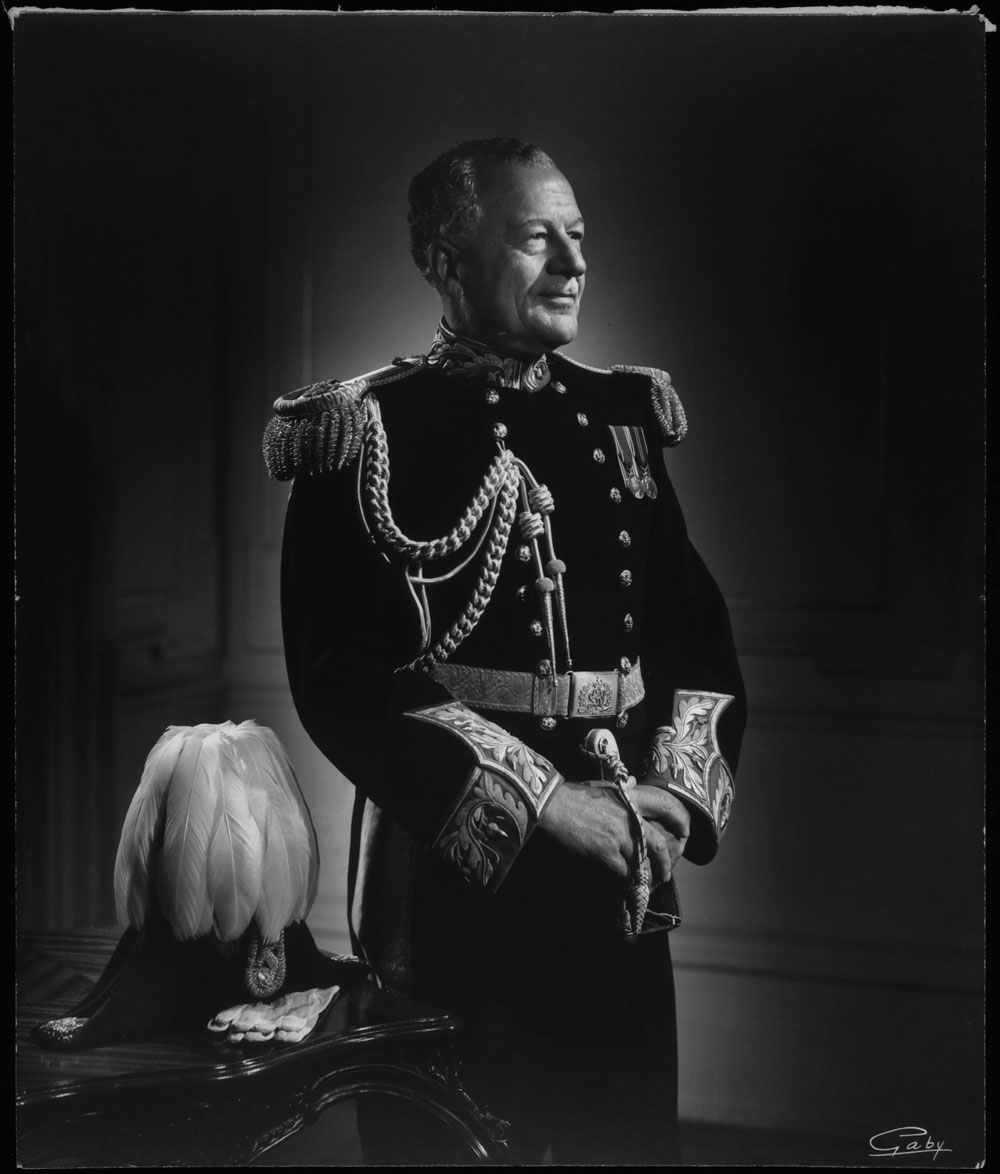 Michener was an avid athlete who followed a regular exercise regime – he jogged every morning and was sometimes dubbed “Canada's Jogging Governor General.” He championed physical activity for Canadians, and supported the “ParticipACTION” program aimed at improving Canadians’ fitness. Named “Running Antelope” by the Alberta Blood First Nation, Michener further encouraged sport by establishing both the Roland Michener Trophy for the Juvenile "AAA" hockey championship in Ontario, and the Michener Tuna Trophy, a championship prize for sport fishing. He also established the Michener Awards for journalism, in honour of his daughter Wendy.

In an address in 1972, he said: “We Canadians have much to hope and little to fear except from ourselves when we magnify our differences and undervalue our traditions and our collective identity.”

In 1973, Quee Elizabeth awarded Michener the Royal Victorian Chain, making him only the second Canadian in history to be awarded it, after former Governor General Vincent Massey.

After his term as governor general ended in 1974, the Micheners moved to Toronto where he continued to practise law and became a corporate director. He served as chancellor of Queen's University from 1974 until 1980, and became secretary general of the Rhodes Foundation, the organization that awards Rhodes scholarships.

In 1979, Alberta Premier Peter Lougheed named a mountain in the North Saskatchewan River valley in Michener’s honour. The following year, the 80-year-old Michener climbed to the summit to celebrate the naming ceremony. In 1990, the Toronto Institute of Medical Technology was renamed The Michener Institute in his honour.

Michener died on 6 August 1991. His ashes and those of his wife, who predeceased him in 1987, are interred at St. Bartholomew’s Anglican Church in Ottawa, across Sussex Drive from Rideau Hall.